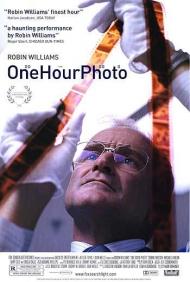 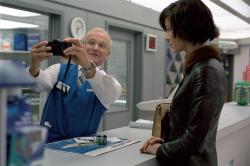 True story; I used to work in a store very much like the Sav-mart depicted in this movie. For a short period there, I worked in the One-Hour Photo Lab. I am therefore in a position to tell you that this movie, which is about so much more than developing photos, got a great many of the details correct.

Like Sey (Robin Williams), we too used to get to know many of our regular customers by name and even learned a little bit about them. Unlike him, however, we didn't pick a single family having marriage difficulties to focus upon, make, and keep an extra set of their photos. No, the only pictures we ever made extra sets of to keep, were the naked photos, usually from bachelor parties and the like. Also unlike Sy, we didn't take these pictures home with us and make a montage of snapshots that covered an entire wall. Nor did we become obsessed with them to the extent that when trouble loomed on their horizon, we never felt the need to personally interfere in their lives. And even if we had, it is doubtful that we would have ever taken it to the extremes that he does.

This story of the lonely photo clerk with the familial obsession is brilliantly filmed by director Mark Romanek in a highly stylized manner. Color and lighting are used to emphasize feelings and situations in both subtle and blatantly obvious ways, but never in a manner that interferes with the storyline. Robin Williams's character is presented as bland, white, washed out. The store where he works is a cold, empty, highly polished, fluorescent lit place. The family that he is obsessed with, the Yorkins, is shown in warm natural colors. These little effects enhance the movie without ever taking you out of the world created within it.

What really holds this movie together however, is the brilliant performance by Robin Williams. I usually try to avoid clichéd Movie Reviewer words like Intense, or Riveting, but in this case, both of those words are merited. This is not the Robin Williams you are used to seeing. This is no Patch Adams or Good Will Hunting, where he just tries to be sincere and serious. In this movie, he truly buries himself in the part. He ends up both sad and menacing at the same time. A truly Oscar worthy performance.

It is his performance and the director's style, which brings this movie above its self. What could have been a simple thriller, or even worse, a long boring character study, is instead, an entertaining movie that will hopefully be remembered come award season, for Williams's performance at least. 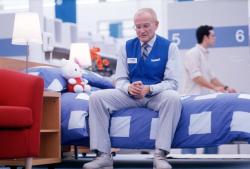 One Hour Photo is a character study as well as a halfhearted thriller. And while it succeeds in the first category thanks to Robin Williams's performance, it fails in the second. And while I agree with Scott that the director shows a deft touch with his use of light and color, it is not enough to make this movie anything more than average.

The script never allows us to see the Yorkin family members as complete people. I understand that this is partly to convey the sense that Sy doesn't really know them either, he only envisions them in terms of how they fit into his delusional fantasy world. While this works artistically, as entertainment it never allows you to fully care for them as people.

As a thriller the movie starts off well enough, but I found the climax to be lacking in any real sense of danger; a bigger pay off would have been nice after the rather deliberate pacing. Again, this may be due to the director going for a more realistic feel to the story by purposely avoiding a typical over-the-top ending. But then again, in real life we read about murderous rampages in the news all the time, next to that One Hour Photo seems rather tame. Yes, Sy has some serious issues to work out, but they never elevate to the point of being edge of your seat viewing. The scene near the end where he is talking to the police officer does give Robin Williams a chance to chew the scenery for a fleeting moment, still it is a little too reminiscent of a similar scene in Hitchcock's Psycho and it suffers from the comparison.

So, although I wouldn't call it long or boring, One Hour Photo is definitely a character study and a fairly good one. They succeed in making Sy a real person. Unfortunately as entertainment is much less successful. Watch this movie for Robin Williams's accurate depiction of a troubled and lonely soul; just don't expect to see a pulse-quickening thriller. 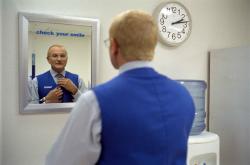 One Hour Photo is a bland movie. It has a sad character that does sad things. I did not hate this character, nor did I in the least like him. I did not care for him or anyone in this movie. Without that, this movie has no glue to hold it together.

Scott wrote that this is "...an entertaining movie that will hopefully be remembered come award season, for William's performance at least." It really is not that entertaining. For over an hour you watch this lonely creep slowly attempt to become part of this boring family. Yes, Williams does a great job of acting, but good acting alone has never been able to raise a mediocre movie above itself. Since the Oscars have now passed, it is apparent that his performance as well as this movie were definitely not award worthy.

Patrick wrote, "They succeed in making Sy a real person. Unfortunately as entertainment it is much less successful." No, they do not make this guy a real person. They never explain his history other than a suggestion that he was perhaps abused. He is lonely with out ever saying why. I do agree with Patrick that, other than the hotel room photo shoot, I was not entertained.

My favorite character in this whole dull movie was the father. Sure he is a scum bag having an affair, but at least he does something. The wife is shown shopping, taking pictures, lying on the couch and bitching to her husband about not getting enough attention. Neither parent even attends their son's soccer games.

I guess the whole point of this movie is that the photo's we take of our lives do not represent the actually lives that we lead. That may or may not be true. Either way I didn't need to waste an hour and a half learning something I already knew.