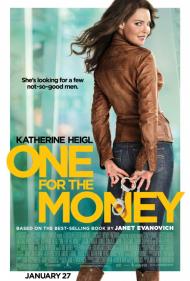 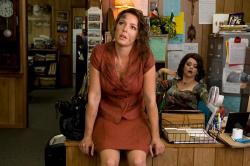 Katherine Heigl in One for the Money.

Thanks in large part to the power of extremely lowered expectations, I actually enjoyed this Katherine Heigl chick flick fantasy based on the series of successful books by Janet Evanovich. Sure, it's being dumped in the dead of winter and wasn't screened for critics before it was released, but I still enjoyed it. It's far from perfect, but I wasn't bored.

Heigl stars as Stephanie Plum, a divorced woman recently fired from her job in the lingerie department of the Newark Macy's. With nowhere else to turn she goes to her bail bondsman cousin and blackmails him into giving her a chance as a bounty hunter. Her first fugitive is ex-cop Joe Morelli, a man she shares a past with, who is wanted for murder. While investigating Joe's disappearance, Stephanie gets involved with hookers, fighters and other assorted lowlifes as she struggles to get her man.

While most chick flicks are romantic comedies, this one is more of a mystery comedy. It's just as much a fantasy as any romantic comedy and there is a romance angle to it, but it takes a back seat to the "mystery". Stephanie's detective work mainly consists of her seemingly able to get anyone to talk to her. This could be because she seems so harmless that they don't feel threatened by her or it could be because the writers couldn't think of another way for the mystery to unravel.

The men in the film are only there to support Heigl. Jason O'Mara is the cop she's hunting down and while he's rough and rude to her at first, he's also incredibly buff and cooks for her. Daniel Sunjata plays Ranger, another Bounty Hunter who takes her under his wing and shows her the ropes without ever asking for anything in return.

Heigl herself does an okay job in the role. She never quite pulls off the Jersey persona but she comes close enough. With her dyed brown hair and slightly more curvy appearance she certainly looks better than I've ever seen her look. I never thought of her as that attractive before, but she's quite sexy here. She should definitely keep the dark hair.

Debbie Reynolds has a small part as Stephanie's grandmother. While it's nice to see Reynolds in a film, she's never quite as zany as she should be. Not through any fault of her own, but because the script never really gives her the chance. The writing is definitely the movie's weakest point. It also fails to give a wasted John Leguizamo much to do beyond collect a paycheck.

Despite the weakness of the mystery and the failure of the humor to be as funny as it should be, there is just enough of everything plus a dose of likable charm from Heigl to keep the story moving along.

I feel like I'm apologizing for enjoying this movie and that's partly because I can objectively see that it's not particularly well made, but despite that I still rather liked it. Although yes, a big part of that is because I went into it with absolutely zero expectations. 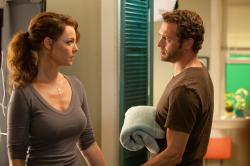 Katherine Heigl and Jason O'Mara in One for the Money

Katherine Heigl can certainly be made up to look as hot as most movie stars can. The brown wig made little improvement on her looks. Her figure is nice, but I liked how her breasts suddenly looked better when Morelli puts the microphone on her and we are shown a close up of her chest.

I have to correct a couple of things Scott wrote. Joe Morelli is not Stephanie's ex-lover. He "nailed" her once in high school and she hit him with her car when he did not call her afterwards. Scott also wrote that she gets people to talk to her because she seems so harmless. Often she gets people to talk by pointing out how they know each other or how they each know the same people.

Acting wise, Heigl is not convincing as a girl born and raised in such a climate. She plays it far too mousy. She should have played Stephanie bigger and mouthier. She plays a woman, who when scorned, is capable of attempted murder, yet we rarely see that attitude. She needed to let her inner Jersey Shore out.

The film is ripe with some humorous possibilities but they are never properly developed. Debbie Reynolds shooting their dinner at the table and Stephanie's Dad remarking, "She belongs in a home!" Falls flat as a joke. Likewise, Stephanie questioning the two prostitutes could have been funnier. As one says to the other, "We got the whole good cop/bad cop thing going on; except we're hookers." Is that really the best line they could come up with?

Julie Anne Robinson is mostly known for directing television shows. This includes such twisted sitcoms as Suburgatory and Weeds. She likely met Heigl when she directed some episodes of Grey's Anatomy.  However, no matter how many situation comedies she has directed, Robinson seemed lost on how to proceed with the humor in One for the Money. The same can be said of the three writers given screenplay credit. The situations are there, but the punch lines are too often not. 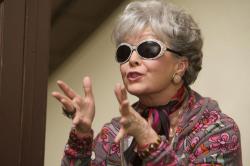 Debbie Reynolds in One for the Money.

Yeah, the direction is definitely reminiscent of a television show. The obvious way the scenes are set up and the pacing of the story almost seems like they have commercials to fit in. Heigl is miscast in the lead. I've never read any Stephanie Plum mystery novels but after seeing this movie I have to agree with the people who commented that Sandra Bullock would have been perfect for the role 10 or 15 years ago. I agree with Eric that Heigl seems too timid except in the scenes where she is all bluster. It is an inconsistent performance. And she doesn't really nail the Jersey accent either.

The “tough” inner-city types she meets are all quite Disneyfied. The hookers played by Sherri Shepherd and Ryan Michelle Bathe are a bit too polite and way too willing to talk to Stephanie. It doesn't ring true, especially when one of them gets beat up for talking too much. I mean just because Stephanie brings her a six-pack and some snacks she's willing to risk a beat down for her? Yeah, that's likely.

The whole back and forth bantering between Stephanie and Morelli plays like a television series as well. They bicker and compete but you just know they are completely smitten and attracted to each other like magnets. It reminded me a bit of the dynamics between Bruce Willis and Cybill Shepherd on the old Moonlighting show. Only without the crazy hot chemistry.

My favorite characters were played by Debbie Reynolds and Daniel Sunjata. Reynolds is funny as the crazy old grandma. Her accent is much better than Heigl's and she makes the part funnier than it is written. Her scenes made me chuckle at least. Sunjata, as Ranger Manoso, is ostensibly there to get Stephanie out of several close calls and to teach her how to shoot, but what he really provides is plenty of eye candy. He is one gorgeous man. As Stephanie so aptly describes him, “He's like the statue of David by Michelangelo, if you dipped him in caramel and strapped some heat on him.”

Whenever Grandma or Ranger were in a scene One for the Money kept my attention, the rest of the time I couldn't have cared less.