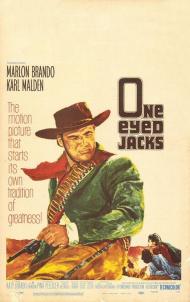 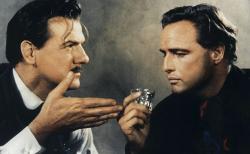 Karl Malden and Marlon Brando in One Eyed Jacks.

This movie proves first and foremost that brilliant acting does not necessarily mean brilliant, or even good, directing. The actor in question is of course Marlon Brando and One-Eyed Jacks is fortunately the only film he has ever directed. The fact that he chose a western doesn't help and for once his performance suffers from too much brooding.

Brando plays Rio an outlaw who, along with Karl Malden's Dad Longworth, steals money from a bank in Mexico. Dad lets Rio take the fall and escapes with the loot. Rio serves five years in prison and when released is bent on revenge.

The movie meanders through several plot twists at a snails pace. By the time it concludes two and a half hours later it is hard to care which outlaw comes out on top.

Although it is quite beautifully shot by Charles Lang with panoramic views of the pacific ocean as a backdrop, it never completely engages the audience. You keep waiting for Brando to let loose with a trademark brutally intense scene that never happens.

Released in 1961 it was a modest hit at the box office but would probably be forgotten today except for the novelty of Marlon Brando as director.

The movie deserves at least one viewing however since it is one of the last times he is truly breathtaking to look at. 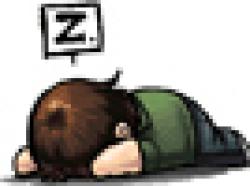 I slept through it. 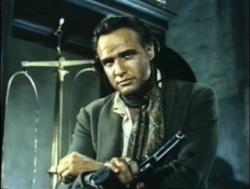 Marlon Brando in One Eyed Jacks.

I did manage to stay awake through this movie, but at times wondered why. As Patrick pointed out, the main reason for watching this movie is the novelty of seeing a movie that Brando directed.

It isn't that he does such a bad job directing. It's just that as you are watching, you wonder that of all the movies he could have chosen, why the hell did he chose this one?

Watch this movie only if you are a 'huge' Brando fan, or a 'huge' fan of really long, slow paced, westerns. If you're not, leave this one on the shelf.