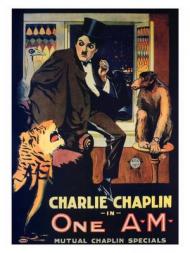 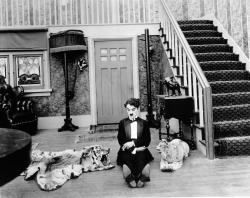 Other than a scene at the beginning, Chaplin is the only actor in the film.

At one A.M., a drunk Chaplin arrives home via a taxi.  He fumbles and stumbles his way out of the cab.  He proceeds into his home where he literally gets into a fight with it.  Whether it is the table, stairs or stuffed animals, everything in his house seems to be working against him.  I like how the rugs slide under him. "I must have a skate on."  He says to himself.

The entire film is Chaplin doing slapstick by himself.  One could argue that this is his genius.  He makes it all look so fluid.  How much rehearsal did he do?  Was some of this made up as he went?  He never stops moving and it is a short film, but he drags some jokes out, such as the bed not cooperating.

The scene where he arrives in the taxi is supposed to take place at 1AM, hence the title.  Clearly it does not.  The day is light out, and the street behind him constantly has cars going by as well as a trolley and someone on a bicycle.  I know, they did not have the lighting then, but the mistake is obvious.   Another one is his bedroom.  The location does not make sense as it is right above his front door from the inside of the house.   From the outside their is nothing there.  I am nitpicking I know, but what else is there to write about a film, whose plot is merely a drunk trying to get to bed? 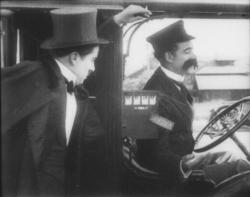 Can you imagine if any other actor but Chaplin told the studio that he wanted to make a movie that would feature one character and the entire plot would consist of him arriving home drunk late one night and attempting to go to bed? Yet for as simple as that sounds Chaplin manages to entertain for 20 solid minutes using just this scenario. Eric, you didn’t mention how funny Chaplin’s inebriated facial expressions are. His drunken attempts to light a cigarette are priceless.

Although Chaplin’s iconic Little Tramp was usually shown as a destitute vagabond in One A.M. he is a wealthy, eccentric man-about-town with a penchant for stuffed wild animals and animal skin rugs.

This movie is filled with cute gags. Chaplin climbing through the window and nearly upsetting the fish bowl to get his front door key and then climbing back outside to unlock the door is one joke that has been copied many times since.

The sets are cleverly designed and are like a second antagonistic character. I liked how he used the hat rack as a ladder to the second floor. The pendulum hitting him on the head becomes frustrating. It feels like a genuine accomplishment when he finally makes it through that door and into his bedroom. If you want to know where he eventually falls asleep you will have to watch the movie.

One A.M., in all its simplicity, perfectly frames Chaplin’s genius. 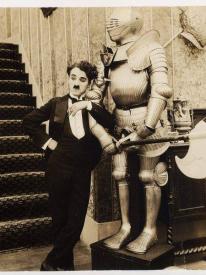 Charlie Chaplin in One A.M.

Eric, I got the impression that none of this movie was made up as it went.  It all looks incredibly rehearsed and staged. Partly because of this, I didn't really find this short to be all that funny. You can see most of the jokes coming, just by looking at the props in the background. You see the stuffed cat on the floor?  You can bet Chaplin will get his foot caught in it.

I also never really believed Chaplin was drunk. His acting is stagey and deliberate, too deliberate, even for a drunk. He moves in a perfectly choreographed manner that belies his supposed drunkeness.

One thing that Chaplin was normally so good at was evoking emotion from his audience. He made you empathize with his little tramp character by combining pathos with humor. There's none of that here though. There's just a drunk trying to get into bed.

Speaking of nitpicks Eric. If you notice when he does his bit running on the table, the items on the table disappear and reappear when it's convenient for the stunt.

There are some clever things in this short and even some amusing ones, but honestly, with all the different items the drunk deals with, I felt like I was watching a prop comic.  And I hate prop comics. Chaplin did far better work than this.