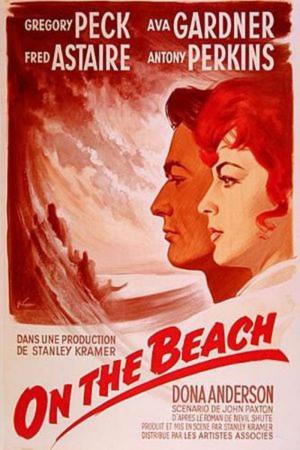 Gregory Peck in On the Beach.

Director Stanley Kramer's On the Beach is a cautionary tale about the last days of mankind after a nuclear war. Made in 1959 but set five years in the future in 1964 it concerns a small group of survivors in Australia and the different ways they choose to meet the end. As the picture opens we learn that scientists estimate that in about five months time clouds of radiation will reach Australia, believed to be the last outpost of humanity. The story is told in a simple, straightforward manner. It is not overly dramatic but neither is it overly inspired either.

On the Beach was shot in black & white as many dramas were at that time. It does feature some nice cinematography, and with Gregory Peck, Ava Gardner, Fred Astaire and Anthony Perkins in the four main roles it boasts plenty of star power. Gregory Peck is the commander of the USS Sawfish a United States Naval Submarine, Anthony Perkins is Lt. Cmdr. Peter Holmes of the Royal Australian Navy. As a last ditch effort to find other survivors or a place where the radiation hasn't reached they set off on a mission all the way up to the arctic circle and back down along the coast of California. One of the best scenes takes place in San Diego. One of the men decides he wants to die at home, so he goes ashore to a deserted town and country.

This movie being more psychological than visually scary, there are no dead or decaying bodies. Instead we just get emptiness and silence.

The always beautiful Ava Gardner plays love interest to Gregory Peck. They make a handsome couple bravely and gallantly facing the end of the world. Fred Astaire is a scientist who fulfills his lifelong dream of competing in a grand prix like car race. He gets one of the movies best lines. 'We're all doomed, you know. The whole, silly, drunken, pathetic lot of us. Doomed by the air we're about to breathe.'

Great cast, but a rather slow and methodical movie that will depress the hell out of you. The final scene will resonate for a while but overall the movie doesn't ring true. There is very little panic. Everyone just seems to gently await their fate with a quiet dignity. Stanley Kramer wanted to see the best in human nature but in reality I think there would be much more chaos and insanity. 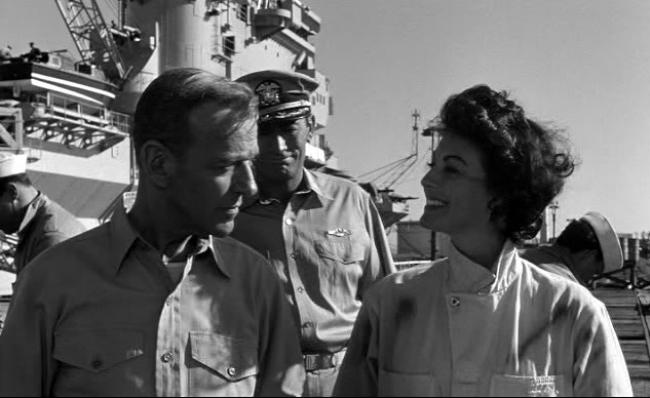 Fred Astaire, Gregory Peck, and Ava Gardner in On the Beach.

I've always been fascinated by end of the world stories and this one starts intriguingly. The only known survivors are those people living in Melbourne, Australia, the southernmost major city in the world. There's a ticking clock element to the story due to the scientific prediction that winds will carry the nuclear fallout to the area in just a matter of months. However, after this initial setup the film has little to offer apart from a somber tone and heavy handed anti-nuclear message.

As Patrick wrote, this is a very sedate end of the world. The apocalypse has never been so civilized. Here you have a group of people who literally know the world is coming to an end and even approximately when it's going to happen, but they continue to carry on their lives as normally as possible. They even obey the fishing season, which for some ridiculous reason is still in effect! If you picture Mad Max as one end of the spectrum as to what life is like after a nuclear war in Australia, than this movie is at the exact opposite end of it. Instead of looting or even getting angry, this cast just carries on with their day, gradually growing depressed and deciding how they'd like to end their lives.

The consequences of nuclear war are also not really shown. As Patrick mentioned, San Francisco and San Diego are still intact without a hint of damage. They're just devoid of people. The radiation sickness that several characters are shown to be afflicted with also leaves no mark. Instead of open sores or loss of hair, they just look tired and a little grumpy. The only ramifications we see are psychological and emotional. It's the soap opera version of the end of the world.

At least the star heavy cast does a nice job, despite some of the weakest attempts at Australian accents ever caught on film. They're all so half-hearted, I wonder why they even bothered to try accents at all. Apart from that though, they deliver some solid performances. Astaire, cast against type, is appealing as the scientist. Peck and Gardner make a nice pair of lovers, she finding love and he re-finding it, although their ending is the least satisfying. Anthony Perkins elicits sympathy as the young husband and father with a wife whose sanity is on a knife's edge.

Despite being a film with little action, the filmmakers manage to drag it out to over two depressing hours. By the time it's over you might be ready to line up and take one of the suicide pills they're offering in the film. Although this was the first major Hollywood film to deal with the end of the world from nuclear war, there have been much better ones made since. Despite some nice character moments in this one, you'd be better off watching almost any of the others.