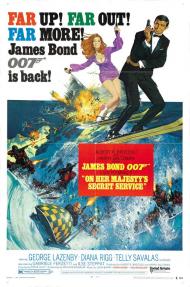 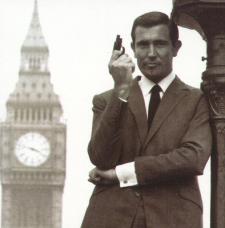 Lazenby looked the part, but his lack of acting skills hurt what could have been the best movie in the franchise.

If only Sean Connery had starred in On Her Majesty's Secret Service instead of George Lazenby. If he had and with just a few tweaks, this could have been the best Bond movie in the entire franchise. It has some great action, a good plot and for the first time in the series, some actual romance. It also has a grittier style about it than the earlier movies. In many ways it was as much of a reboot of the series as when Daniel Craig appeared as Bond over 30 years later. Unlike the recent reboot however, this one failed and the producers turned back to Connery and the over-the-top style they avoided with this one.

From the very beginning it's obvious that the producers were worried about how the audience would accept someone else playing Bond. After the pre-credit sequence, Lazenby looks dead into the camera and says, "This never happened to the other fellow." Then, to emphasize the point that this is still part of the same series, scenes from the earlier movies are played over the opening credits. A few scenes later a janitor can be heard whistling the theme to Goldfinger. And again a few scenes later, Bond is going through his desk where he finds souvenirs from earlier adventures. None of this is really necessary and what's really annoying about it is that after going to all the trouble of showing that this movie is a sequel to the earlier films, the story has Blofeld meet Bond and not recognize him, even though they had just met in the previous movie!

The story starts with Bond obsessing over Blofeld. He has a brief affair with Tracy Di Vicenzo (Rigg), a suicidal young girl who turns out to be the daughter of mafia boss, Marc Draco. Draco urges Bond to continue seeing Tracy as he thinks he's good for her. Bond agrees to keep seeing her if Draco will help him find Blofeld. What follows this gentlemen's agreement is the worst scene in the movie, which is a montage of Bond and Tracy falling in love. They walk through a field of flowers, ride horses together, and hold hands in a scene that looks so dated and awful, it's embarrassing. Fortunately, it's over quickly. Eventually Bond tracks down Blofeld on the top of a mountain where he has a spectacular place whose cover is that of an allergy institute, but in reality is his base for taking over the world.

One thing I'll say about Lazenby is that he looks the part. A former model, he's trim, fit and athletic. Physically he looks the most like the Bond described in the books. When he opens his mouth though, it's obvious that he's an amateur when it comes to acting. He's okay, but often not very good at all. He's particularly bad at delivering Bond's one-liners, although he's not helped by having some truly rotten ones. When the person Bond is fighting gets his neck caught in the limb of a tree, he says, "He's branching out." In another scene, a skier falls in the path of a snowplow and is churned up, to which Bond quips, "He had a lot of guts." However, in a scene like Bond's escape from Blofeld's mountaintop fortress and the subsequent chase down the mountain Lazenby is superb. Almost the entire scene is played without a line of dialogue, which suits his talents. There's another silent but well done scene where Bond breaks into a lawyer's office to find out information about Blofeld and ends up reading a Playboy magazine, pocketing the centerfold as he leaves.

To counteract Lazenby's inexperience, the producers cast established actress Diana Rigg as Tracy. I think she's terrific in the part and is one of my favorite Bond girls, however, she acts circles around Lazenby. Instead of supporting his weaker performance, her portrayal just emphasizes Lazenby's weaknesses. It would have been great to see how Connery and would have played off her.

The ending has the potential to be very emotional. Bond and Tracy get married. That's right, Bond gets married (and for real this time). There's a moment at the wedding where Bond and Moneypenny share a look and then he throws her his hat. If Connery had done that it would have meant something because of their shared history, but with Lazenby it lacks resonance. And of course the last line in the final scene, which is the first and only time a Bond movie ends on such a down note, might have been truly emotional if Connery had delivered it. Connery's tough, womanizing Bond having to deal with that moment could have sealed this movie as the best of the series. Plus I think Connery might have had the clout and the intelligence to put the kibosh on that fucking montage scene. 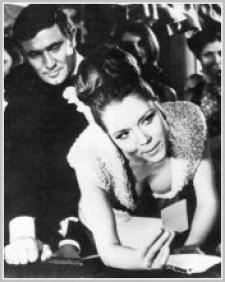 On Her Majesty's Secret Service is one of my favorite James Bond movies. I do not have a hard time excepting Lazenby in the role. It never calls for that much acting anyway. What I find interesting about casting him is that it reveals how the producers saw Bond. They obviously cared more about his look than his talent, but Lazenby is not this film's problem.

Richard Maibaum wrote the better Bond films. He went for the more realistic approach. I get the feeling that the producers decided to add the silly quips Scott mentioned. The one joke that really works is the one about Bond experiencing a little stiffness. The music likewise has a few hits and misses. The music is very annoying when he fights the men taking him to see Draco, but it is suitably original during the skiing scenes.

I think the James Bond producers too often added things to the movies thinking they had to do what audiences expected, such as the stupid one liners and the girls Bond has sex with on the mountain. However, they added a romantic montage, which definitely does not belong in a Bond film. The love story works without it and could have definitely been cut, even though I like the Louis Armstrong song playing in the background.

Tracy is the most fleshed out female character in any Bond movie and she had to be. What kind of woman could steal the heart of a man who has seen the world and beded countless women. She is a feisty free spirit with Daddy issues. Of course she has money, who else could experience so much and keep up with Bond. The love story is ingeniously integrated into the plot with Blofeld. The fact that he saves her in the first scene and she saves him later on, puts them on a level playing field. He even lets her drive the car. Something he would poke fun of other women doing in other movies.

The length is a bit tedious. The montage and the scenes with the girls on the mountain could have been trimmed. What makes this movie work as a love story better than Casino Royale is that this is a mature Bond falling in love. I could see this Bond retiring and starting a family. Craig's Bond is just starting out, having just gotten his 007 status. I do not see him retiring. On Her majesty's Secret Service is close to movie perfection, if only they would have not over done a few scenes. 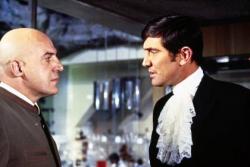 Telly Savalis and George Lazenby in On Her Majesty's Secret Service.

Scott you are too hard on Lazenby’s acting. I think he does a decent job. Sure he gets some of the worst puns to quip but overall I found him suitable for the role. It is interesting that his Bond seems older than the Bond in most of the other movies, yet at 29 Lazenby was the youngest actor to ever play him (at least thus far). He makes quite a physical Bond engaging in more hand to hand combat than Connery and certainly than Moore ever did. I like the fact that the action is not over-the-top.

It does run too long and I agree about that fucking love montage, gag me already. Still this is definitely one of the better Bond entries. The one double entendre that Bond says that I enjoyed was when he tells Q (in reference to his wedding night), “Thank you, Q, but this time I've got the gadgets and I know how to use them.”

I did a bit of research on this movie as I had little to add other than what Scott and Eric already wrote. I found out a few interesting tidbits.

The Playboy magazine is a nod to the fact that the novel “On Her Majesty’s Secret Service” was first published in serial form in that magazine. The fact that Blofeld acts as if he and Bond have never met is because the writers stayed too true to the book, which is set before You Only Live Twice, the previous movie. Eric, like you I loved the Louis Armstrong love theme. “We Have All the Time in the World” was the very last song the great Satchmo ever recorded.

I thought I recognized Ab-Fab’s Patsy Stone herself Joanna Lumley (although she is very young here). She plays the English Girl in Blofeld’s international army of allergy afflicted women knitters (it really isn’t as silly as that sounds).

On Her Majesty’s Secret Service certainly contains the single most seriously dramatic moment of any Bond film. The ending took me by surprise as it is such a far cry from the usual lighthearted Bond-about-to-bed-a-hot-babe finale. It is actually a bit jarring and makes this entry stand out as a truly unique Bond movie.