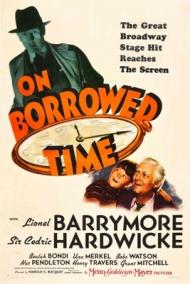 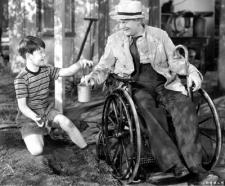 Bobs Watson and Lionel Barrymore as Pud and Gramps.

On Borrowed Time is another forgotten gem from 1939. It was based on a play that was itself based on a novel. This movie solved a puzzle for me. I remember my father describing it to me and my brothers when we were kids. I think it was the first movie he could remember seeing. I had forgotten the title - or perhaps my dad had forgotten it. But once I watched it I knew this was the movie he had been talking about so many years ago.

It stars the great Lionel Barrymore, most famous today for playing Old Man Potter, the richest man in town, in It’s a Wonderful Life. Like that movie he plays an old man confined to a wheelchair. Only this time he is “Gramps”. Instead of a misanthropic miser he is a cantankerous but lovable grandfather. Two other actors from It’s a Wonderful Life are in this movie. Beulah Bondi plays Gramps’ wife Nellie and Henry Travers plays a doctor. She played Ma Bailey and he played the wingless angel Clarence.

After his parents’ sudden death in a car accident (in the opening scene) a young boy nick-named Pud is being raised by two elderly grandparents. The pride of Gramps’ yard is a beautiful old Golden Russet apple tree. After a neighborhood boy gets caught trying to steal apples Gramps makes a wish that anyone who climbs his tree will have to stay up there until he gives them permission to climb down. The wish turns out to have come true and when Death (Mr. Brink) shows up Gramps and Pud trick him into climbing the apple tree. Complications ensue.

I was surprised by the ending. It wasn’t what I expected at all. For some it might be too much corn. To them I say hooey. If you're not moved when Gramps tells Pud, "I'm going away... where the woodbine twineth." you have no soul. The scene where Mr. Brink visits Nellie is serenely touching. In fact the entire movie is genuinely heartfelt and it has a few comic moments as well. Being a sucker for the time period I love how it conjures up the simplicity of small town America before WWII changed everything. I have to agree with my pops. On Borrowed Time is a good movie. 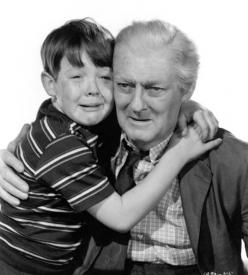 Bobs Watson and Lionel Barrymore in On Borrowed Time.

I have the vaguest memory of hearing about this movie when I was very young, but I had forgotten all about it until I sat down to watch it.  It's an intriguing premise and almost anytime you have Death as a character in a movie you know it's at least going to be interesting.  I'm guessing that the creators of the Showtime series Dead Like Me were fans of this movie as several elements of that show are reminiscent of On Borrowed Time.

You can definitely tell that this was based on a play.  Apart from a couple of scenes, the entire movie is set either inside the house or by the apple tree.  For the most part that doesn't matter so much except it would have been interesting to see the effects of Death's absence on a wider scale.  Even just some shots of newspaper headlines or a few shots around the world showing miracles happening would have been nice.  No one dying for the amount of time Death is in that tree would make pretty big news even if the cause wasn't known.

The relationship between Gramps and Pud is totally sappy and corny, but also quite touching.  You'd have to be dead inside not to feel something for the pair of them.  And I also have to concur that the scene with Mr. Brink (on the brink of death, get it?) and Nellie is well done.

In some ways I was reminded of an extended episode of The Twilight Zone by this movie.  It uses a fantastical element to tell an emotional story about a grandpa and his grandson.  And while the Death angle is interesting, it is Barrymore who holds the movie together and gives it its soul.  Who knew Old Man Potter had it in him? 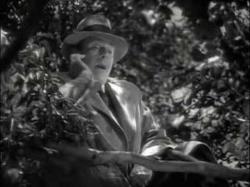 Death is trapped in a tree?

What a horrible ending!  The decisions that grandpa makes throughout the film are with Pud's welfare in mind.  However, those choices end up back firing in the worst possible way.  I also thought I had the ending figured out but was surprised and disappointed by how it ended.  It is played as a happy ending but I saw it as anything but.

No offense intended what-so-ever Scott, but it is clear that you have not been around a lot of children.  The relationship between Gramps and Pud is not totally sappy and corny.  Some children are very close to a grandparent.  I saw the relationship between Gramps and Pud as very realistic.  He lost his parents, of course he is going to be close to his Gramps.

While I am at it, I also disagree with Patrick when he wrote that Gramps is cantankerous.  He is not difficult to get along with.  He just likes doing his own thing.  He yells at the kid for stealing his apples and who could possibly like Demetria?  She is just after the inheritance, and by no means has Pud's best interest.

What I do agree with my brothers on is the performance of Barrymore.  He has the funniest scene when he and Pud get caught skipping church to go fishing.   He has the best line when he says, "I can't stand these holier-than-thou folks. If a man's a good Republican, or a Mason or an Elk, that's good enough for me."

I also have a glimmer of a memory of our father speaking of this movie.  I was never as close to him as Pud is to Gramps, but I thought of him the entire film.  When growing up our dad never went to church.  He liked to fish and tell us stories like Gramps does to Pud.  Sentimentally this film was nice to watch but the ending is a let down.