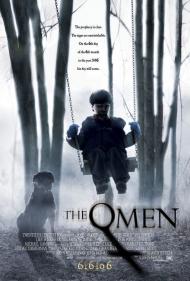 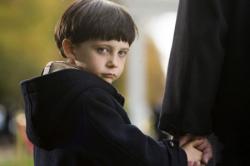 Seamus Davey-Fitzpatrick as Damien in The Omen.

Let me guess; someone decided to remake The Omen simply because of the date 06-06-06. Sound stupid? It sure does, but I can think of no other reason why someone would remake this film at this time.

Not only is it a pointless remake but a paint-by-numbers one at that. Robert arrives at a Rome hospital to find that his wife had a still born baby. A priest convinces him to secretly adopt a baby boy, Damien, who has no family. Robert becomes ambassador to England and 5 years later a nanny hangs herself at Damien's birthday party. Mom gets depressed and dad gets approached by a priest and a reporter who each try to convince him of something going on.

With the success of The Da Vinci Code book, The Omen could have been a better film had it spent more time pointing out the real life events that match the prophecies in The Book of Revelations. The reason The Da Vinci Code was great and controversial is that it treated itself as fact even though it is not. The Omen is a religious story but this film hides from religion like it has the plague. It briefly touches on how the prophecies have all come to pass but none of the actors react as if they mean anything. An audience gets it's cue from the characters. If they do not think something is important why should the audience.