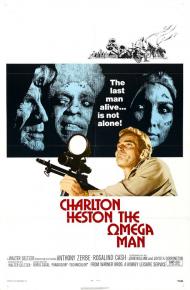 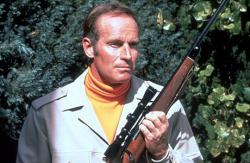 Charlton Heston in The Omega Man.

For a short time in the late 60's and early 70's Charlton Heston was king of the futuristic sci-fi movie. This movie was made after Planet of the Apes and before Soylent Green. It is not as good or as well-known as those movies but still manages to entertain.

Heston plays a doctor who because of a vaccine is the sole survivor of humanity after a world-wide biological war released a deadly plague. The only other survivors are a group of deformed humans who call themselves the "Family". The plague has made them ultra sensitive to light so they only come out at night. It has also turned them into homicidal killers who have turned their hate into a religion against science and technology. They see Heston's doctor as the last remnant of this world that needs to be eradicated.

Eventually Heston discovers other human survivors of the plague (they are infected but have not yet "turned") and comes up with the idea of making a serum from his blood. He falls for a young black woman (Rosalind Cash) and this movie features one of the first interracial sex scenes by a major Hollywood star.

Although it frightened me as a child, The Omega Man is now the perfect movie for a campy, cheese-ball late, late show. Just don't expect to take it seriously.

Heston is the only part of the movie that holds up over the years.

I loved this movie as a kid, but I have to say that it did not live up to my memory at all. While it still contains the germ of a great idea, the campiness and the really horrible makeup job of the villains truly weakens its impact.

This was the second of three attempts to adapt Richard Matheson's novel, "I am Legend". Like the other two versions, only bits of this one resemble the book and also like the other two versions, it doesn't come close to capturing the quality of the source material. This version and Will Smith's 2007 version both insist on making Neville a hero who sacrifices himself to save others, which completely destroys the impact of the book's ending.

Like you say Patrick this movie revels in its 1970s-ness. The outfits, the attempts by Neville to sound hip, the poorly filmed action scenes and weak special effects all date this movie dramatically. The only truly impressive moments are the scenes at the beginning that show an empty Los Angeles. Unlike the later adaptation, the makers of this version didn't have CGI to help them make the city look deserted, which makes the scenes more real and empty looking.

Heston is great as Neville. His performance is the only part that lived up to my memory. The scenes of him alone at the beginning are the best scenes in the movie. Planet of the Apes was another of my favorite movies as a child and I often think of Heston as the action hero of my very early youth. He's such a rugged man's man. Its easy to see why he became so involved with the NRA. He was clearly determined that when the world was taken over by apes or destroyed by a virus that he would be able to defend himself! 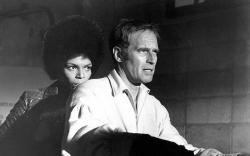 Rosalind Cash and Charlton Heston in The Omega Man

The Omega Man is so bad that it can be a fun watch.  It has the worst soundtrack in recorded history. The songs are rarely appropriate for what is happening on screen.  When the infected are trying to take Neville's house and he is desperately trying to start the generator, we hear romantic music with occasional little bursts of horns.  Did the person who wrote these songs even know what scenes he was writing them for?

If the soundtrack does not make you laugh, the clothes will. Heston wears a gaudy green house coat and whatever you call that frilly shirt. See the picture in Patrick's review.  He looks as if he belongs in an Austin Powers movie.  Dutch merely wears blue jeans and a leather jacket.  He would fit in at any point in the last fifty years.  Some styles are timeless.

The dialogue is laugh out loud dated.  An infected black guy calls Neville's home, "Honkey paradise."  Lisa introduces Neville as, "He's the man, and I mean the man.  He's cool okay."  When she goes to his home she says, "I see where you dig your heavy thinking." Sometimes I am not even sure what she is saying, "Don't screw up. I know how to roll, but it's hard on the elbows. And if you just have to play James Bond, I'll bust your ass."  My favorite line is, "Is there anything you can do, doctor, I mean, seeing as how you've lost over 200 million patients?"

Neville is the existential man living alone and free to do what he wants.  Neville did well on his own, surviving nightly attacks from the infected.  Once he takes on the responsibility of Lisa and the children he loses his choices.  By abandoning the imposed existential philosophy, Neville lost his freedom of choice, becoming weak.

I am sorry.  I really tried to make it seem as if this movie has depth, but I just could not do it.  The Omega Man is nothing more than some dated campy fun, not to be taken seriously.