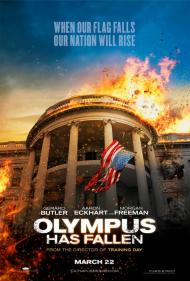 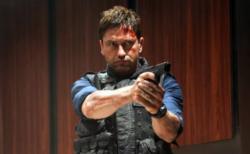 Gerard Butler in Olympus has Fallen.

The most obvious comparison to make with Olympus Has Fallen is that it is Die Hard set in the White House. Although, the plot holes and implausibilities that litter the script in this movie are so numerous that  they make that Bruce Willis action classic look like a documentary. You don't just need to suspend your sense of disbelief for it, you need to take it, wad it up into a tight little ball, and throw it as far away from you as possible. Ludicrous is too mild a word to describe it.

Before the end of the Cold War, Hollywood could use the Soviet Union whenever it needed a country to oppose the U.S.A.. Since the fall of the Berlin Wall, it's tried out several countries in that role, but lately seems to have settled on North Korea as the go to bad guys and this movie continues that trend. This is probably down to a few factors. We fought them in a war once. They're not overtly defined by their religion, so it's not seen as politically incorrect to portray them as villains. Their leaders fit the stereotype of egotistical dictators to such a degree that they're almost caricatures. And perhaps most importantly, they're not a major market for Hollywood films, so that if they are offended, it won't affect Hollywood's bottom line as it would if the Chinese decided to boycott or ban a film.

The plot is simple enough. A group of the aforementioned North Koreans launch an attack on Washington D.C. and manage to take over the White House, holding the President and several members of his cabinet hostage in the bunker that lies below it. Fortunately for the President and the audience, former secret service agent, Mike Banning (Gerard Butler doing his best to hide his Scottish accent), manages to infiltrate the White House before it is sealed, where he is able to do his best Bruce Willis impersonation on the way to saving the country and the day.

There are too many ridiculous plot elements to name them all and to emphasize them too much would be to miss the point of the movie. The only point is to put Butler in situations where he can kick some serious terrorist ass for truth, justice and most importantly, the American way. To be fair, the action is well filmed and also quite violent and graphic, although mysteriously lacking blood and gore. People are shot in the head and torn apart by machine gun fire. Butler breaks more necks than I kept count and uses a knife, a pistol and other assorted weapons, along with his fists and feet. When he's in motion and you don't have to think about how stupid it all is, it does manage to achieve the lowest level of entertainment.

However, I have to mention a couple of the more blatant elements of stupidity in the script to give you an idea of the silliness of it all.

The terrorists, for example, are shown to be expert shots and quite professional during the takeover of the White House. They overwhelm the U.S. security forces, who are shown to be nearly incompetent in the process. Once Butler shows up though, they become as good of shots as the Stormtroopers on the Death Star, while he can't miss. Three of them with machine guns, firing through a wall, manage to miss him completely, while he is able to fire a single shot pistol, over his shoulder, while running away from them, through the same wall, and kill one of them.

Kang, the lead terrorist, needs to extract three codes from his prisoners so that he can activate the self-destruct mechanism on all of the nuclear missiles in the United States as they sit in their silos. Naturally, the codes he needs can't be changed, nor can they be overridden from the silos themselves, and no safety measures were taken during their construction to prevent the missiles from exploding before launch. To get the codes, he threatens two members of the cabinet in front of the President. Before the torture even really gets started, the President orders them to give Kang their codes because, as he says, "They'll never get mine." However, since the President has already shown that he can't stand to see other people get tortured, why doesn't Kang just keep going on them until the President gives him his code? And why does Kang wait so long before torturing the first person and then a few hours more before torturing the next?

There are other examples of silliness, but in the service of brevity, I'll refrain from mentioning them here. Suffice to say, if you played a drinking game where you took a drink every time something implausible happened, you'd be smashed within half an hour. Although, that might actually help you enjoy it.

Of course, this isn't the type of movie people go to watch because they want to think about it. It's the kind of movie people watch for the action and on that very base level, it manages to succeed. If that's what you're looking for, then you may enjoy this movie, but it definitely helps to watch it with a sense of humor. It's impossible to take seriously. 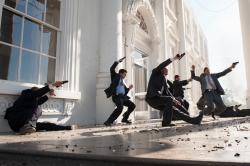 The secret service takes a serious hit in Olympus Has Fallen

Scott is correct. There are more plot holes in this film than gun shots, and there are lots and lots of gun shots. One of the scenes that truly bothered me was the ground assault on the White House. The terrorists blow a hole in the perimeter fence and merely walk in armed with machine guns, taking target practice on the security detail inside that choose to stand in the open, instead of taking cover. Then a garbage truck carrying a large caliber machine gun opens fire on the front door of the White House as secret service men come pouring out like excited children on the last day of school. You would think that they would have heard all the gun fire and exited the building more cautiously or even used a different exit. They look like plastic ducks in a carnival shooting gallery. (see photo)

The biggest plot hole for me, that Scott did not mention, was an actual hole. At one point Mike Banning extracts a survivor from the White House by having them leave through a basement vent to the outside, where the survivor is greeted by a couple of Marines. Why in the hell did those Marines not enter the White House the same way that person exited? They could have helped Banning out. The two terrorists shown guarding the area were in the cross hairs of American snipers. Pop those two guards and you could have placed any number of soldiers in the building.

The movie opens on an ill fated Christmas night and then skips to a year and a half later, where the story proper begins. The point being that Banning has to redeem himself for the events of that Holiday. Think of Clint Eastwood's character from In the Line of Fire (1993), only less realistic. If you can forgo all logic, suspend your disbelief completely and forgive Butler's accent slipping a few times, you may enjoy this action film that, once it gets started, never slows down.

Like last years Red Dawn remake, Hollywood has embraced North Korea as the current politically correct bad guys of choice. Rick Yune, who was first internationally noticed as James Bond's Korean foe in Die Another Day (2002), may be the biggest benefit of such a trend. This American born model turned actor is of Korean descent, as well as martial arts trained. He once even tried out for the Olympic Tae Kwon Do team.

Butler however, baffles me. Other than his rugged good looks, I do not get what keeps getting him film work. Other than 300 (2006), none of his films have been blockbusters. This Scottish actor brings very little to this, or for that matter any, film. Bruce Willis or even Sylvester Stallone, would have brought much more to the table. Their history as American action film icons would have added to the movies patriotic fervor. Alas, they possibly read the script and quickly turned it down. 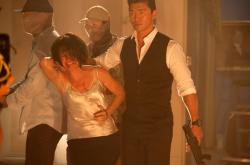 Melissa Leo and Rick Yune in Olympus Has Fallen.

My brothers have done a decent job listing the many plot holes in the script. Yes it is highly implausible that a group of foreign terrorists could so brazenly attack our nation's capitol, successfully take over the White House, and hold the President hostage. Any enjoyment of this movie requires you to just accept this ridiculous set-up and go with it.

The good news is that the action is tense enough to hold your attention while distracting from the many obvious script problems. And the CGI work is commendable when you consider that nearly the entire movie was shot in Louisiana hundreds of miles away from the actual White House. Director Antoine Fuqua (Training Day) knows how to film action sequences, especially the hand to hand combat scenes which contain some truly brutal moments.

Gerard Butler is pretty good as the tough-as-nails former Secret Service Agent. Sure he's a walking, talking cliché but Butler manages to humanize him. The best performance in the movie belongs to Melissa Leo as Secretary of Defense Ruth McMillan. She is physically beaten and tortured but her fighting spirit is never broken. Her best moment is when she begins reciting The Pledge of Allegiance while being led through the White House at gun point (see photo). Eric compared Banning to Clint Eastwood's character in In the Line of Fire; another similarity is the fact that Dylan McDermott played a Secret Service Agent in both movies.

If you can get past the details of the initial attack on Washington, that makes our defenses seem like a joke, then there is plenty to enjoy for action junkies. And the cast is better than you find in most movies of the genre. Critics have been far from kind to it but this film holds a score of A- on CinemaScore, a Las Vegas based market research firm that surveys movie audiences exiting theaters. So clearly it pleased its target audience and earned enough money to warrant the sequel that is currently in the works entitled London Has Fallen. I only hope they come up with a more believable set-up than the one in this movie. 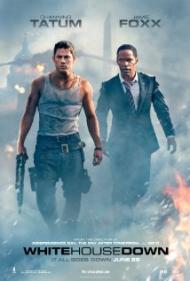 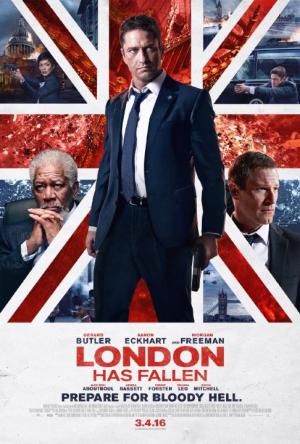