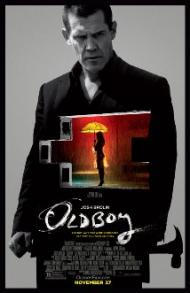 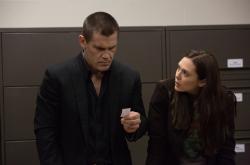 Oldboy is a remake of a 2003 South Korean film of the same name. The original only received a very limited release in the USA, but it was critically acclaimed and won the Grand Prix at the 2004 Cannes Film Festival. Much of the criticism toward this remake, directed by Spike Lee, has been made by comparing it unfavorably to the original. Not having seen the South Korean version, I can't make that comparison, but I can tell you that you don't need to have seen the original to see the flaws with this one. There's an interesting idea here, but it isn't executed very well.

Josh Brolin stars as Joe Doucett, an unlikable, alcoholic, absentee father, salesman, who, when the movie begins, loses a big deal when he makes a pass at his client's wife. That night he is taken prisoner and held by persons unknown in a small room for 20 years. His captors provide him with no information and allow him no human contact. His only source of information is a television, upon which he learns that his ex-wife has been murdered and that he is the prime suspect. His sanity comes and goes over the years, until he finally resolves to hold himself together and stay in as good shape as possible so that should he be released, he will be able to explain himself to his daughter. One day he is gassed and when he awakes he is in a box in the middle of a field with a new suit and a bag full of money. He sets out to discover the identity of his captor and somehow get his revenge.

Brolin, who is normally a fine actor, seems miscast or maybe just misdirected. His performance is grim and robotic and never rings true. It doesn't help that he's playing such a detestable character. He's an asshole when he's imprisoned and an automaton when he's released. We want him to find his captor because that's the plot, but we're never rooting for him because we really want this guy to succeed. Given the implausibility of the plot and the over the top nature of the action scenes, he definitely needed to play it bigger.

The rest of the cast seems more in tune with the tone of the story than Brolin. Samuel L. Jackson's character is a comic book villain with his odd hair and interesting wardrobe. Sharlto Copley camps it up as the true villain of the story. And Elizabeth Olsen is fine as Marie and a more interesting character than Joe, but is very much a supporting character to Brolin's lead and the two share very little chemistry.

There's a large action scene at the center of the film where Joe does battle with a large number of henchmen. It's filmed in one long take and should be a wow moment, but it's just another scene that doesn't work right. Brolin's Joe is like an unstoppable tank and we should be cheering him on, but because he's been playing the character so low key, the scene doesn't feel real. The wrong tone is struck and what should have been fun, is only methodical, bloody action that left me wondering why one of the henchmen didn't just get a gun and be done with it.

The ending comes with a dark twist, but it's one that's pretty easy to see coming. When I began to suspect where the story was headed, my only question was whether or not the filmmakers would actually take the story that far.

Although this is ultimately a failure, the premise is intriguing enough that it did make me interested in seeing the original. It has to be better than this remake.

Personally I detest remakes. Unless the original contained a great idea that was poorly executed, there is no need to remake a movie. Why redo a classic? From all accounts the 2003 version is a very good film and Spike Lee has brought nothing new to the table in this blatant attempt at making a Quentin Tarantino type movie.

The story begins in a very intriguing manner. But I never bought into it. It never felt like 20 years had passed and it never satisfactorily explains how this alcoholic salesman becomes a deadly killing machine. OK, so he quits drinking and begins to exercise while locked up in his hotel room prison. But how exactly does that turn him into a man capable of taking on dozens of presumably well trained security guards?

The ending is shocking but not exactly satisfying. The taboo subject of incest is handled in a very explicit manner. But Joe's actions at the very end make no sense. Surely there was a better use for those diamonds than what he chose to do with them. The one thing I disagree with Scott about is the acting. I think Josh Brolin is quite good in the lead. The script and direction may be lacking but he makes the most of this highly unrealistic character caught in an unbelievable situation.

Score: Quentin Tarantino two, Spike Lee zero. In 2008, Lee's WWII film Miracle at St. Anna met with mixed reviews and lukewarm box office. The following year Tarantino had a hit both critically and commercially with his own WWII flick Inglourious Basterds, which was nominated for seven Oscars including Best Picture. Back in 2004 Quentin Tarantino had served as the President of the Jury that selected the original Korean language version of Oldboy as the winner of the Grand Prix at that year's Cannes Film Festival. Tarantino heaped praise on the movie which was described by some as Tarantino-esque. In 2013 Spike Lee directed this American remake, and was greeted with mixed reviews and the worst box office bomb of his career. 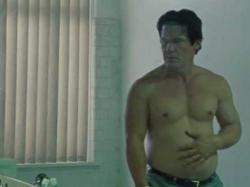 I saw the original version on the insistence of a co-worker who wanted to know my reaction to it. The incest angle is treated slightly different in the original than in this remake, but the taboo subject is just as obvious. No doubt he wanted to see how I would take to that part of the plot, and let’s be honest, that part of the story is all this tale has going for it. It is shocking, disgusting and completely renders the “hero” of the film likably impotent.

I agree with Patrick that Josh Brolin handles the drama more than well enough. He was brave to do nude scenes with his less than slim body. Where his performance fails is in the action scenes. I concur with Scott and Patrick that I never bought that forty-something, untrained Joe could take on dozens of men with only a hammer. He moves far too slowly to accomplish what he is intended to. Of course this is as much, or more, the fault of the choreography and direction as it is Brolin’s performance.

Where the action succeeds is in the gore and violence. Cutting small gouges out of someone’s neck is painfully heinous, as is the outright slitting of another’s throat, both of which happen here. One particularly gory shooting had my son and I both saying “Whoa!”

The biggest fault of both this and the original film is that the person manipulating the revenge has no way of guaranteeing the necessary coincidences come to pass. The only manipulation is when a woman with a recognizable umbrella leads Joe in the right direction. This scene also creates a moment that makes Joe a villain. About six football players intervene when Joe grabs the umbrella girl to ask her questions. These guys are merely helping a woman they see being harassed but are repaid in broken bones and death. How am I supposed to cheer for, or care about what happens to, a guy who maims and kills innocent people?

Oldboy starts with an intriguing set up, contains a decent mystery and is brave enough to address a taboo subject. The only thing worth a lick is that subject and just how frank this film addresses it. The huge coincidence is almost insurmountable and the fact that Joe deserves bad things to befall him leaves the audience feeling mostly unconcerned with Joe’s fate.