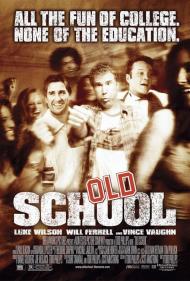 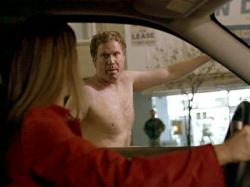 Will Ferrell in Old School.

Old School follows the very tired formula of Fraternity's right to party versus a college Dean. Animal House did it first and best. Jeremy Priven, who plays the Dean here, was on the Fraternity's side in the forgettable 1994's PCU.

Mitch, played by the always-bland Luke Wilson, breaks up with his girlfriend after finding out she has gangbangs when he is out of town. He rents a home near a college campus. His party animal friend Frank moves in after his bride catches him drunk and streaking. Will Ferrell naked is not a pretty sight. Third friend Bernard (played by the coolest B-actor working; Vince Vaughn) decides to make Mitch's new home into a fraternity. They recruit all the rejects from the college and show them all the time of their life. The Dean dislikes the three men from years ago and wants to enact revenge by shutting down the fraternity house.

The frat versus the Dean is the weakest part of the movie, yet it takes up more screen time than it should. What the movie needed to focus on was why three thirty somethings are so disillusioned with life that they have to return to the antics of their youth to be fulfilled. Frank takes to this new life as party animal leader like a duck to water. Mitch, who at first balked at the idea, ends up sleeping with his boss's daughter before meeting someone and falling in love.

The fights with the Dean are unimaginative and not at all funny. They have to take tests, so they cheat. Ha ha ha ha. They have to show school spirit so the fraternity does a dance number. Wow! Wilson is as stiff a dancer as he is an actor.

My favorite character is Bernard. He initiates the whole idea yet, we see through his actions, that he really only likes looking through the window and not actually participating. He is a father of two, who occasionally takes his preschool sons to Fraternity meetings. He says "Earmuffs" and his oldest son knows to cover his ears while dad uses profanity. In another scene he turns down sex with a coed because he is married. Bernard is living vicariously through the actions of others. Unfortunately many of Bernard's scenes ended up on the cutting room floor. The DVD includes some.

This movie made me embarrassed to be a thirty something male. 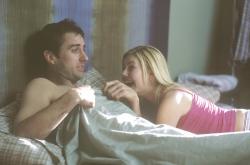 While Eric is right when he says this isn't a very good movie, he glosses over the only enjoyable part, which is Will Ferrell's performance. While he might not be pretty naked, he is damn funny, clothed or unclothed. Any scene he was absent from had me bored, but when he's there the comedy gels. If you don't laugh during his streaking scene or when he shoots himself with the tranquilizer gun (very predictable, but very hilarious), then you should seriously start looking for your sense of humor, because you've lost it.

Other than that, Eric was exactly right about this movie. Luke Wilson lost out on all the charisma to his brother Owen, Jeremy Priven looks and acts embarrassed to be playing the stereo-typical dean, and the college hi-jinks have all been done before and better in other films.

I do know several people who loved this movie and they all fit the same description, which is probably this movie's target audience. They are all in their thirties and they all belonged to a Fraternity when they were in college. Occasionally they will wistfully launch into tales of their former wild days in college. So for them and all the other aging frat-boys out there, here's your movie. 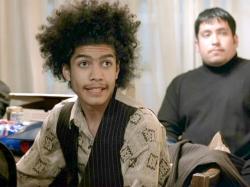 Rick Gonzalez cracked me up.

I never would have guessed that I would like this movie more than either of my brothers. Yes it is predictable and lacking in originality but it does contain a few laughs and the characters are likable enough. Luke Wilson is not as bad as you guys say. No he isn’t as funny as his brother Owen but he is definitely better looking.

Scott, I agree that Will Ferrell is funny. He perfectly embodies the dimwitted party boy. Still the jokes that I thought were funnier involved Blue (the world’s oldest frat brother) and the two scenes with Juliette Lewis. She plays a clueless slut brilliantly. But the part that inexplicably made me laugh the hardest was the following exchange after the boys first are told they are being expelled…

Something about the delivery of Rick Gonzalez as Spanish cracked me up.

The premise of Old School feels like a bloated SNL skit, but with a running time of less than 90 minutes it doesn’t overstay its welcome. One thing I noticed seeing this movie for the first time in 2010 is how young these men all looked then. From the perspective of nearly 8 years later they don’t seem much older than the younger college boys pledging their fraternity.