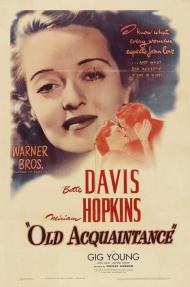 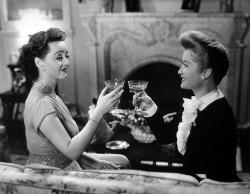 Old Acquaintance was the second movie to pair Bette Davis with real life rival Miriam Hopkins. The first one, The Old Maid, had been such a huge hit 4 years earlier that it was only a matter of time before another vehicle for the two scenery chewing actresses would be found.

As the title suggests the story revolves around the lifelong friendship of two small town women, both of whom find success as writers. Davis is a respected literary talent while Hopkins becomes a best selling romance novelist.

The crux of the plot is that Hopkins' husband (John Loder) is really in love with Davis. Davis is the noble one here and she denies his feelings even though she feels the same way about him. Over the course of the years Hopkins and Loder have a daughter and eventually divorce. The final act of the movie concerns a love triangle between Davis, a younger man and Hopkins' now grownup daughter.

The real meat of the movie is of course the scenes between the two fiery actresses. This is one movie where the fireworks really fly. One scene in particular is a favorite whenever famous movie clips are shown. After a heated argument with Hopkins Davis starts to leave the room. She then turns around, walks slowly across the room to Hopkins, grabs her around the neck and shakes her. The music swells dramatically and then a suddenly composed Davis says, “Sorry” before exiting. It is a classic camp moment.

This movie is certainly not art, nor is it one of Bette Davis' best pictures. But for fans of old fashioned comedy and high melodrama it is a must see.