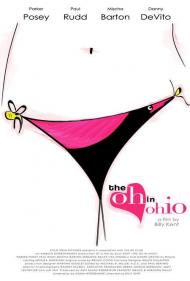 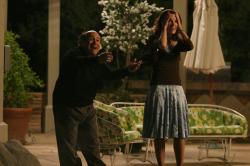 Danny DeVito and Parker Posey in The OH in Ohio.

The OH in Ohio is a sweetly humorous little sex comedy featuring a talented cast. Although it is not always sure whether it wants to be slice-of-life realism or outright absurdist comedy, it is nonetheless amusing and engaging.

Parker Posey makes the most of a good part. She plays Priscilla, a successful female advertising executive (it's her job to bring businesses to Cleveland). The one rain cloud in her otherwise sunny life is the fact that she has never in her life experienced an orgasm. This problem is even worse for her frustrated husband Jack (Paul Rudd). Eventually he winds up in the arms of one of his students (Mischa Barton) while Priscilla turns to a battery operated device and is finally able to achieve a climax.

You also get Danny Devito as Wayne the Pool Guy, Liza Minnelli as sex therapist Alyssa Donahue hilariously urging women to celebrate their vaginas, and an uncredited Heather Graham as a lesbian sex shop clerk.

The movie is not really as nonstop funny as that sounds. In fact I counted only two genuine laugh-out-loud moments. Liza's scene (she's only in the movie for about five minutes), and the scene where Priscilla places her beeper in her vagina and then proceeds to have an orgasm during an important business meeting when Jack keeps repeatedly paging her. After ten years of marriage it is the first time he ever gave her an orgasm. Posey handles this physical bit brilliantly.

Other than that the movie is charming, witty and surprisingly poignant; you grow attached to the characters. They are all lovable and portrayed realistically enough to make you invest emotionally with them and both Priscilla and Jack evolve and grow as people. The decidedly un-Hollywood-like ending will either disappoint or refresh depending on your tastes. At any rate this one is worth a look see. 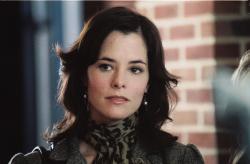 Parker Posey in The OH in Ohio.

When I first read Patrick's review I was left with the impression that this was a comedy trying to be funny and failing most of the time. What I realized after watching it is that this movie isn't that kind of comedy. It's more a light-hearted drama than anything else.

While at first I was bit baffled why Posey would fall for Danny DeVito of all people, it becomes clear that he is someone comfortable and familiar to her. That doesn't fully explain it, because even with that, he does (no offense, Danny) still look like Danny DeVito, except for the ponytail, which isn't doing him any favors.

Although the movie does try to give equal time to Paul Rudd's story, you never end up caring about him as much as Posey, mainly because of his sad sack demeanor throughout the story. How anyone can be having an affair with Mischa Barton and still be depressed is beyond me.

This is a nice little film that, while it won't bowl you over, does manage to keep you entertained. 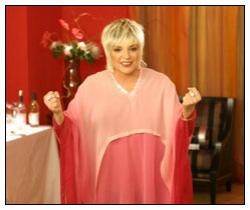 Romantic comedies are predictable for a reason.  We innately want to see two people fall in love and make a commitment to each other.  It is the normal path of life.   For those of us in committed relationships it confirms our decision to have done so.  For everyone else it gives hope that someone is out there for you.  They are cinematic comfort food.

The Oh in Ohio has many of the trappings of a traditional rom/com.  The attractive female lead, who is as nice as pie to everyone around her.   She is charmingly awkward, making her even more endearing.  The one difference is that she is already married.

Her dilemma is her inability to achieve an orgasm with her husband, causing frustration in their marriage.  The movie makes sure to point out that it is not the husbands fault.  He brags of his ability to have given other women many orgasms, and his girlfriend tells him he has a great penis.

They split up, and each find sexual enjoyment elsewhere.  I agree Scott, Rudd's story line is far less interesting.  He has simply had his ego bruised.  Priscilla goes on a journey of sexual discovery, by first learning to pleasure herself.  She then finds sexual satisfaction with Devito.

All of that is fine and dandy, but then the movie takes a left turn and loses it's story arc.  Priscilla could not reach climax with her husband because.....?  Early in the movie she wants to celebrate her promotion while he clearly does not share her enthusiasm.   Is she not truly comfortable with him?  Later he is hesitant about bringing a "toy" into their bed.  Does he have some insecurities?

The path this movie should have taken would have been to have their differences resolved.  She had to become more comfortable with her vagina, while he had to learn to let go of some control in bed.  The ending should have been the two of them in bed, exhausted in a pile of sexual sweat.

The decidedly un-Hollywood-like ending did disappoint.  The film gives screen time to two characters and then sends them off in different directions.  Both have issues that once resolved could have brought them back together.   I hate feeling manipulated by a film.  It makes you think they will get back together.  Why give Rudd any screen time after he moves out if they are not going to end up with each other?

A mystery or a thriller can mislead the audience as that is their gimmick.  Romantic comedies have different rules, and The Oh in Ohio broke them.  If it did not, it may not have bombed at the box office?   Romantic comedies have a tried and true formula that cannot be dramatically changed.  For another example see Ira & Abby (2006).  It is a truly hilarious comedy with two likable leads.  It also broke the romantic comedy rules.  Oh, you never heard of Ira & Abby?  I rest my case.