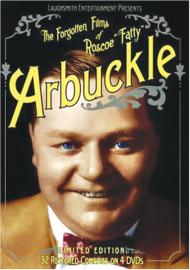 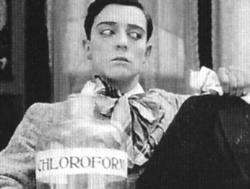 For some reason, adults often played children in silent movies. Mary Pickford made a career out of it. In Oh Doctor!, Keaton, who was 22 years old at the time, plays the adolescent son of a philandering Arbuckle. He cries often, like he is only 6 years old.

The movie starts at a horse race, where Arbuckle, his wife and son are betting on the races. St. John and his wife are also there. Arbuckle makes eye contact with St. John's wife and pokes Keaton with a needle so he can sit next to her. Both families lose big at the races, even though they both thought they had good tips.

St. John has eyes on Arbuckle's wife's jewelry while Arbuckle has eyes for St. John's wife, who calls Arbuckle over to her house so St. John can sneak into Arbuckle's house. She pretends that she is sick. Arbuckle races over in hopes of giving her an injection. St. John, meanwhile, goes to Arbuckle's house and steals his wife's necklace. Keaton sees him make off with it and follows him to his apartment. He then phones his mom. As expected, the wives eventually encounter each other and Arbuckle and St. John end up in a fight.

Arbuckle started his movie career as a member of Mack Sennett's Key Stone Cops. In Oh Doctor! He relives one of those moments as he disguises himself as a policeman at one point. It may have been a tribute to his past but he should have been looking more toward his future. Keaton has a small role here and looks ridiculous, and not in a funny way, playing his son. Arbuckle had one of the greatest comedic talents working for him and he did not always understand how to showcase him. 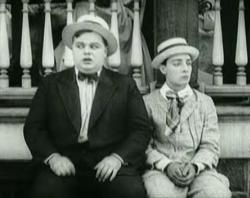 From 1917 to 1919 Roscoe Arbuckle, Al St. John and Buster Keaton made a series of two-reel comedies as a trio. Arbuckle was the big name and the star of these pictures, with St. John frequently playing a bad guy and Keaton was often Arbuckle's sidekick of one sort or another.

Eric, I don't know what makes you think Keaton was playing an adolescent boy here other than the fact that he is an adult playing a child. Clearly his behavior is that of a much younger boy. This is an interesting role for the Great Stone Face, as he would never again show such a broad range of overdone emotions on screen. He laughs and cries with abandon.

Not only was Roscoe Arbuckle's corpulent physique funny to look at, he was also incredibly gifted at making hilarious facial expressions. I cracked up when he first spots St. John's girlfriend at the racetrack (Eric, St. John is not married to this other woman).

What an unscrupulous doctor Arbuckle is! In order to drum up business he starts his car and then sends it careening smack into a group of men standing on a sidewalk. Then while these men are dusting themselves off and checking for any damage, Dr. Holepoke passes out his business card among them.

This short features many chases and fights that were a staple of silent slapstick. Arbuckle and St. John were both talented physical comics but their skills paled in comparison to Keaton's abilities. But then I cannot think of anyone who was his equal at taking a pratfall or simply flipping over backwards. Something he does several times here. My favorite being when Arbuckle flips him over the kitchen table and Keaton lands sitting in a chair.

Oh Doctor! is quite funny. Fans of Keaton or Arbuckle will enjoy this movie as will anyone else that appreciates classic silent slapstick comedy.

This, the fifth of fourteens short to star Arbuckle and Keaton together, was long considered a lost film. Fortunately, in the 1990s a copy of it turned up in Norway. It's not the greatest of their collaborations, but like all of their work, it contains some memorable and funny moments.

While many of their films together feel very improvised and simply place the two of them together in a store or a playhouse or a kitchen, this one actually has a plot. Not a complicated plot, but a plot nonetheless.  The duo are also playing slightly different characters than in the other work. Arbuckle is playing a professional man when he tended to play more blue collar characters and most shocking of all, as my brothers mentioned, Keaton plays a child who displays genuine emotion!

Patrick mentioned my favorite scene as well, when Arbuckle tosses Keaton across the table. Keaton doesn't make a very convincing child, but due to the disparity between their heights, Arbuckle is able to toss Keaton around several times as if he weighs nothing at all. One only has to watch St. John take a fall to see how well Keaton did it. St. John is fine at it, but Keaton was an acrobat.

Maybe not their funniest film together, but like all of theirs, it's worth a watch.