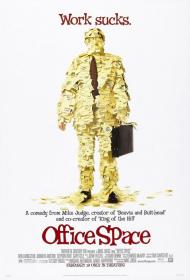 Office Space is the quintessential modern-day workplace comedy. Although it's set in an office and working in an office will help you enjoy this comedy, anyone who has ever held down a job will find something familiar and funny in this movie. Although it tanked at the box office, it has since gone on to become a cult classic, and with good reason.

Ron Livingstone stars as Peter Gibbons, a software developer working at Initech where he avoids updating software in anticipation of Y2K as much as possible. After being hypnotized one day he finally works up the nerve to live life like he's wanted to for a long time. He asks out the hot waitress (Aniston) that he's had his eye on. He stands up to his boss and just generally has a good time. Ironically though, his behavior is seen as leadership material and he ends up getting promoted, while two of his harder-working co-workers end up getting fired. Peter then decides to team up with the fired programmers to install a virus on the Initech network that will help them embezzle money so that none of them ever have to work again.

What makes this movie so funny is that it contains so many true-to-life moments. Every office cliché is touched upon and almost every character you meet leaves you with a feeling of, "I know someone just like that." We've all had an asshole for a boss at sometime in our lives and the first scene of Peter at the office is a classic as he's talked to about his TPS Reports by three different people, only to be told that it sounds like, "Somebody's got a case of the Mondays." The forced fun days, the birthday cake, the mysterious fax machine error messages, trying to shut down your computer quickly so you can leave are all covered here with relatable hilarity.

This is also one of the movies that is infinitely quotable. "PC Load Letter? What the Fuck does that mean?" "Peter, what's happening?" "First, Mr. Samir Naga... Naga... Naga... Not gonna work here anymore, anyway." "It's a jump to conclusions mat!" "I could set the building on fire." "I'll be showing her my O face. Ohhhh, ohhhh, ohhhh." "I get the feeling she's cheating on me."

Along with the starring cast, Stephen Root has a hilarious part as Milton, the mousy and kind of creepy guy who mumbles a lot. The movie is based on series of cartoons Mike Judge did for MTV featuring the character of Milton, voiced by Root there as well. While not the star here, he steals every scene that he's in. His Swingline stapler has become an icon and you can buy it on t-shirts and posters. Swingline even started producing a replica of it.

Reportedly, writer/director Mike Judge was offered the chance to make a sequel after this one became a huge underground success on DVD. He turned it down saying that just getting this one made caused him too much anguish. While it would be nice to see a sequel, I can't help but think that it would never live up to the original. The expectations would be too high. 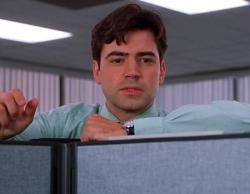 I was recommended this movie by a co-worker. I was not sure if I would like this film as our tastes in humor is not in complete agreement. We both enjoy Weird Al songs, but he liked The Big Lebowski, while I could not see what was so funny about it. I tried to duck out early before he could give me the DVD, but he caught me before I could get out the door. I guess I should not have jumped to conclusions as I found Office Space to be a funny ass film!

Of course the beauty of this movie is the fact that anyone who has a job can relate to it. I personally, and I guess professionally, liked when Peter tells the auditors that he has eight bosses, “Eight, Bob. So that means that when I make a mistake, I have eight different people coming by to tell me about it. That's my only real motivation is not to be hassled, that and the fear of losing my job. But you know, Bob, that will only make someone work just hard enough not to get fired.” I truly felt his pain.

All of the jokes do not exactly work as well as others. Milton is the funniest character and I laughed every time he open his mouth to mumble something, “...And, and I told Don too, because they've moved my desk four times already this year, and I used to be over by the window, and I could see the squirrels, and they were married, but then,...” However the scene where the copy machine gets what it has coming, lasts longer than the smile it might put on your face.

I have long wondered what charm Jennifer Aniston has beyond her looks and pleasant disposition? What does she bring to a movie that any number of other actresses could not bring as well, or even better? For my money, she is best in an ensemble cast, and 1999 may have very well have been her best professional year. Not only was she in this movie, but also one of the most overlooked animated films, Iron Giant. That same year she was doing Friends and she even did a guest spot on South Park, the best animated show on television.

The next time I work with the guy who loaned me this DVD, I will start the conversation with “What’s happening?” then before he can answer I will tell him what I think. I will end the conversation with a “...kay?” or a “...hmm.” Just as management does in the movie. As this movie proves, sometimes its fun being annoying. 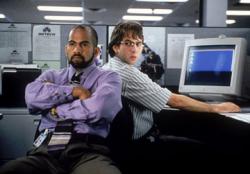 I don't know if it's because I've never worked in an office like the one depicted here or not, but I didn't enjoy this movie anywhere near as much as my brothers did. Oh sure I've had annoying bosses and I've known a few Milton's in my day but I never really cared for Peter or his two cohorts.

I chuckled a few times but not once did Office Space induce a genuine guffaw from me. The closest I came to laughing out loud was at the very beginning when the three friends are each stuck in the traffic jam on their way to work. Michael Bolton is gangsta rapping to a song on his car stereo but then turns it down and gets real quiet when a black man passes by his car. I agree with Eric that they drag a few jokes out. Them beating up the fax machine is one example, as is the reaction Michael Bolton gets to his name.

Peter is such a whiny, slacker. His self-proclaimed idea of a good time is doing nothing, which is pretty much what his job consists of. His biggest work related problem is the annoyance of being pedantically lectured to by his numerous bosses. He seems to spend most of his time on a coffee break at Chotchkie's. I didn't find him to be all that likable, and a comedy without a likable central figure loses much of its appeal.

Jennifer Aniston is underused as the cute waitress. Although her conversations with her manager over her lack of flair were humorous and the scene where Peter dreams about her having sex with his smarmy boss was the single most comically inspired moment of the movie. As you mentioned in your review Eric, people's tastes in comedy vary greatly and Office Space just didn't do it for me. 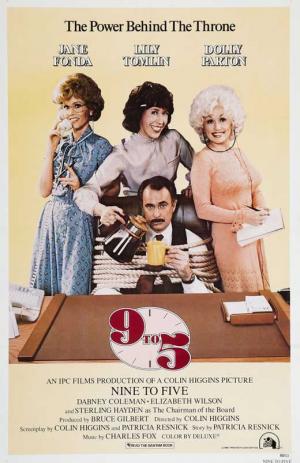