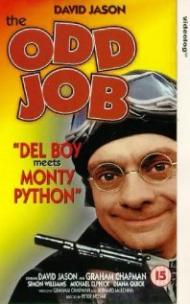 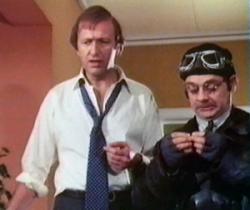 Graham Chapman and David Jason in The Odd Job.

Graham Chapman had the least successful solo career of all the members of the comedy group, Monty Python. He worked on a variety of projects, but only starred in two movies of his own. Yellowbeard was his magnum opus, but in 1978 he produced, co-wrote and starred in The Odd Job, a small film that was never released outside of the United Kingdom.

The plot is simple and features a gimmick that has been used in other films. Chapman plays Arthur Harris, a man who comes home on his fifth wedding anniversary to learn that his wife is leaving him. He becomes so depressed that he decides to commit suicide. Before he can work up the nerve to do it, a man (David Jason) knocks on his door asking if he needs any odd jobs done. Arthur decides it would be easier if someone else killed him and hires the Odd Job man to do it for him. They agree it will be easiest on Arthur if he doesn't see it coming and so the Odd Job man will surprise Arthur in the next couple of days. Naturally, the next day Arthur's wife returns to him and he changes his mind about dying. The rest of the film is simply Arthur trying to avoid the Odd Job man until he can convince him that he really doesn't want to die anymore.

While the humor starts strong, even at just 87 minutes, the one-joke premise is stretched pretty thin. The plot is a remake of a half hour television episode written for Ronnie Barker as part of a comedy anthology series he made in 1972. Edited down to just 30 minutes, I'm sure it was quite funny, but there's just not enough material for a full length feature.

David Jason, known mostly in the US for playing Frost on PBS's Mystery, but everywhere else for playing Del Boy in the long running and successfull BBC sitcom Only Fools and Horses, plays the Odd Job man. He's the only actor to reprise his role from the original television version. He and Chapman play well off of each other in the scene where they set up the idea, especially when he tries to strangle Arthur "by surprise".

George Innes, who plays the racist caretaker of the apartment building where Arthur lives, also provides some laughs. Like the dialogue scene above though, all of his best bits are at the beginning. The final two-thirds of the film, where Arthur tries to avoid the Odd Job man, is more flat and far less funny. The downer ending is also a real comedy killer.

A mildly amusing little film that just runs too long, The Odd Job is only likely to be of interest to fans of Monty Python and Graham Chapman in particular. 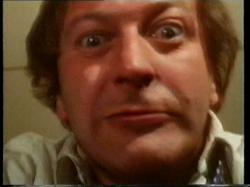 Graham Chapman as Arthur Harris in The Odd Job.

Yes, even at less than 90 minutes the meager plot is stretched thin. Although the way the story escalates by having the Odd Job man killing off several other people he mistakes for Arthur Harris is quite funny and kept my attention right up till the unexpected ending.  Graham Chapman spends most of the movie cautiously peering around every corner and jumping at his own shadow.

Graham Chapman may have been the least successful Python member outside of the troupe but he was also one of the most hilarious. His reactions and facial expressions are priceless (see photo). He gets the best lines. The scene Scott mentioned where the Odd Job man tries to strangle Arthur "by surprise" is very funny.

When he defends his technique by explaining that he didn't tell Arthur he was going to attack him beforehand, Arthur replies in an exasperated voice, “But I saw you coming at me.” Earlier, over the phone, he tells his estranged wife that he is going to swallow the bottle of tablets in the bathroom cabinet. She calmly tells him that they are just aspirins and that there are only 5 left in the bottle. “That's still 3 more than the recommended dosage.” he curtly replies.

I was unfamiliar with David Jason as I've never seen an episode of either Only Fools and Horses or PBS's Mystery. He is quite funny though with his befuddled manner and blundering attempts to murder Arthur. He handles the slapstick humor with panache.

The Odd Job is a funny idea that I agree probably worked better at sitcom length. Still it made me laugh out loud a few times and Graham Chapman's reactions and double-takes are reason enough to watch this silly little film. 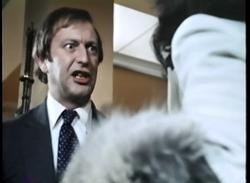 Graham Chapman in The Odd Job

There are some jokes to be found here but it mostly felt like a mediocre television show. The doorman who believes he is fighting the axis powers within his little sphere of control and influence is worth a chuckle. The nymphomaniac who wants to have sex with the doorman or Arthur, or likely any man is also worth a smile. As my brothers wrote though, there is just not enough going on in The Odd Job to keep your interest for too long.

Scott quoted some dialogue between Arthur and his wife Fiona. Their conversations are the real highlights of the film. When Fiona calls Arthur the day after she left him, Arthur says, “I am going to kill myself and ah, how have you been.” Startled, she responds, “What did you say?” Arthur clarifies, “I said, “How have you been?” Seen any good movies lately?” A perturbed Fiona asks, “You’re not serious are you?” Arthur assures her, “Absolutely, what films have you seen?” They then have the hilarious talk about the aspirin, that Patrick mentioned.

Graham Chapman is the best thing the film has going for it and as good as he is, he is not able to raise The Odd Job above its two star rating. He cannot carry the film alone and David Jason is less funny than Marty Feldman. Chapman is truly missing his fellow Monty Python cast mates. Eric Idle could have played the doorman, Terry Jones the bum in the park and the waiter. “His mother was Swiss. They know nothing about wine.” John Cleese should have played the head waiter and Fiona’s boyfriend. Michael Palin could have played the, would be, assassin and all could have played random police officers and other small roles.

The direction is cramped and distracting. There are some odd angles from the floor and annoying close ups. The slapstick never comes close to being as funny as some of the dialogue and as Scott wrote, the best parts are in the first one third of the movie.