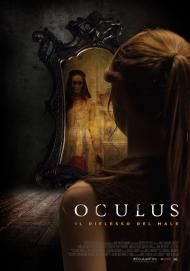 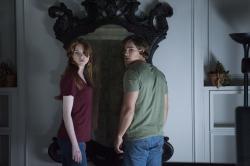 Horror movies tend to go either one of two ways. For many years they were all about the blood and the body count, but of late they've tended to be more creepy than gory. There's less scary moments in these types of films, but they're much more atmospheric and ultimately more entertaining, since eventually all those hack and slash films end up very similar. Not that there aren't scares to be had in Oculus, because there are, but it's definitely higher on the creep-o-meter than anything else.

21 year old Tim has just left a mental institute where he has resided since he was a boy and was sent there for shooting his father. His sister Kaylie (played by Doctor Who's Karen Gillan) is there to meet him when he leaves and she takes him to the house where they grew up and where their parents died. Kaylie believes their parents were killed by an evil spirit that lives inside a mirror, while years of therapy have lead Tim to believe that there is a rational explanation to it all.

Once in the house, which Kaylie has rigged with cameras and other supernatural detection devices, the siblings begin reminiscing about their childhood and as the evening progresses, the creepiness grows. Soon they are having trouble distinguishing the past from the present as we are shown what happened all those years ago at the same time as we see Tim and Kaylie try to cope with things in the present. Visions of demonic spirits intermingle with visions of their past, which included a mother going slowly insane and a father who seems to have been seduced by the woman who lives inside the mirror.

So far Gillan is only known to Doctor Who fans as Amy Pond, but with a starring role here and and a part in this summer's Guardians of the Galaxy, her career is poised to go mainstream. She delivers a great performance here, mastering an American accent in the process. She keeps the film grounded and her character, both in the present and the past, where she's played by young Annalise Basso, holds the story together, even in its most outlandish scenes. She also gets the film's most memorable moment, involving a light bulb, that I won't give away here.

The film's biggest weakness is its ending. It's pretty standard that horror movies generate sequels and the ending of this one sets up future installments. However, by doing so it sacrifices a satisfying ending for this one. I've shared a lot of different moods with movie audiences over the years, but I've never felt such shared disappointment like I felt at the end of this one. There was literally a groan of disappointment that emanated from the entire audience and even a few audible cries of, "That's it?"

Apart from that ending, this is an entertaining horror film. It breaks no real new ground, but it presents the familiar horror tropes with a certain style that makes them seem somewhat fresh again. When the eventual sequel does happen, I'll probably be right there to see it.

Karen Gillan is the best thing about this film. Perhaps it is her time spent on Doctor Who, but she is very capable at playing outlandish situations as normal. Her Kaylie Russell literally does battle against a haunted mirror. Yeah, it sounds ridiculous but Gillan helps greatly to sell the preposterous plot. She says this line to the mirror with complete sincerity, “Hello again! You must be hungry.”

Brenton Thwaites as Tim Russell, does not fare as well. All he is required to do is disagree with his sister before slowly seeing that everything she says is 100% true. These two actors make unconvincing siblings. Gillan is a red head and thus her skin is pale. Thwaites has a tan that belongs on someone with an entirely different genealogy. For the record, Gillan was born in Scotland while Thwaites was born in Australia.

This movie is very creepy, with only occasional glimpses of any demonic spirits. It is the unseen that is the most fearful. The spirit of the mirror is able to influence those near it by creating illusions. Through those means it is able to get people to do its bidding. Throughout the film, the audience has to guess what is real and what is a demonic prestidigitation? It is in those situations that the film is the most entertaining.

Oculus could have definitely been a better film. As it is a mirror that is possessed, the evil inside could have fed on vanity or insecurity. The movie only hints at such things. The script touches on how we remember things as we want to but it is not that well explored.

I agree with Scott and his fellow audience members in that the end is a big let-down. Although Oculus is based on his short film, Mike Flanagan needs to attend a screenwriting 101 class. Step one: create likable characters for audience to root for. Check. Step two: put said characters into interesting situations. Check. Step three: Give the audience a reward for their time spent investing in your characters and their struggle. FAIL!

Oculus starts promisingly. The idea of the mirror is quite interesting. I enjoyed Kaylie's history lesson regarding it. However, just about any of the mirror's previous owner's stories would have been better than the one we are saddled with. At least the previous owners were all unaware of the mirror's demonic spirit. Kaylie and Tim made a promise to kill the mirror as children and the main gist of the plot is Kaylie's plan to do so. As written above, her brother is a reluctant, skeptical participant.

What makes no sense is the manner in which Kaylie plans on killing it. She has this elaborate setup with cameras and alarms and even a rigged up way to destroy it. None of which makes any sense. Why the hell does she return to their childhood home in the first place? Why not just destroy the mirror? I know, I know, there would be no movie otherwise, but I found her actions to be so stupid that I could never invest in the story.

I do agree that Karen Gillan is a terrific actress. I had no idea she was British as I've never been a fan of Doctor Who. She manages to make this ludicrous situation seem almost plausible. The same cannot be said of Brenton Thwaites. He's a terrible actor who mistakes brooding for emoting. Garrett Ryan, who plays the young Tim, acts circles around his older counterpart. Perhaps Thwaites's wooden performance was an acting choice to represent all those years his character spent in a mental institute. But I think not.

The children's story also makes no sense. Their father has chained their mother to the wall in their bedroom and is acting in an incredibly psychotic manner. When the 12 year old Kaylie seeks outside help she is told that her father must make the call. They then attempt to get their grandfather involved but he immediately takes their father's side. I don't know about you but at this point I would have run away and notified the police. Anything to get away from that crazy house. Again, I am taking this all too seriously but one of my main problems with horror films has always been the irrational behavior of the characters in them. This movie is no exception. In fact as far as logic goes, Oculus is as blind as a bat.