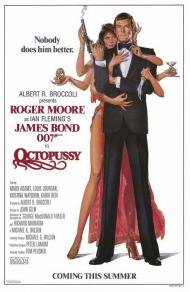 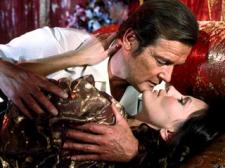 Roger Moore just keeps on getting older in each Bond movie.

And from the seriousness of For Your Eyes Only, the Bond series moved right back into the slapstick of Octopussy. I'm not sure if it's just that I'm getting used to Moore's light style of playing Bond, but I found this movie to be fairly enjoyable despite its over reliance on jokes or maybe because of it. Sometimes Moore's Bond is so far over the top you just have to give in and admit that it's pretty cool.

This time around British Super-Spy, James Bond, 007, is investigating the murder of a fellow double-0 agent, 009. His only clue is a Fabergé Egg. With just that tiny clue Bond is led through India and eventually to Berlin where a rogue Russian General plans a nuclear "accident" that he hopes will lead to the unilateral disarmament of nuclear weapons by the NATO powers that will allow Russia to march in and conquer all of Europe. The fact that thousands of innocents will die in this "accident" is a price he's willing to pay. I think one of the things that makes this movie better than Moore's early Bond movies is that at least the plot makes sense and there actually is one. And it even provides some moments of real tension in between the laughs.

Moore explicably keeps getting older with every movie and thus his action scenes become more and more unbelievable. It's actually easier to believe that his Bond has the charisma to tell a tiger to "Sit" and have it obey (after all, no pussy has ever been able to resist Bond) than it is to believe that this nearly 60 year old man can do battle on top of an airplane in mid-air. There's no doubt that Moore's flippant delivery and the use of jokes undercuts the tension during the action scenes, but the thing about Moore's Bonds is that if you expect them to be action movies you'll be disappointed. His Bonds are comedy-adventures, but never action movies, with the possible exception of For Your Eyes Only.

Maud Adams returns as a Bond Girl for this one, becoming the only woman in cinema history to play two different Bond girls in two different movies. I haven't done the research to back this up, but I'll bet she's also the oldest actress to play a Bond Girl. Not that she's old, she was only 38 when Octopussy was released and still roughly 20 years Moore's junior, but when the average Bond girl is in her 20s, 38 seems pretty old. I'm figuring that the production team must have gotten along well with her and that's the reason why they asked her back because she didn't make much of an impact in The Man with the Golden Gun and she doesn't make much of an impact here. She's attractive enough, but not really that good of an actress.

The same is true of the villains. Neither Kamal Khan or his Indian bodyguard are very distinctive. General Orlov has the potential to be an interesting bad guy, but not enough is done with him. Despite the Bond movies having taken place through so much of the cold war, this is the first time a Russian soldier is actually the villain.

Octopussy is a very minor entry in the Bond franchise. It's better than most of Moore's movies, and contains a couple of moments of true tension, especially the finale in the circus where 007 is trying to stop the bomb from blowing up, but once again it relies too much on comedy. To be fair though, at least when it tries to be funny, it succeeds. That's more than can be said for some of the other films in the series. 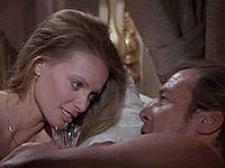 Bond gets a good look at her little octopussy.

The one thing Octopussy will forever be remembered for is the name itself. When I rented it at the DVD store with State of Play, the lady behind the counter said to me and my wife that "State of Play is due back tomorrow while-uh-your...other one, is due back Friday." She was too embarrassed to even say the name out loud. The movie clearly states that it is a girls name, but it gets made light of none-the-less. Like many James Bond lines, it is meant to have a double meaning. An attractive girl, lying naked in bed, describes her octopus tattoo as, "...my little octopussy."

Scott mentioned Moore's age, and I have to agree. He has sex with two very beautiful women. One could be his daughter, while the other could be his grand-daughter. Scott wrote that Maud Adams is not much of an actress, but like any of Hugh Hefner's girlfriends of the past 30 years, she can fake the love scenes well enough. She is very beautiful, but not at all convincing as a lady who trains women to be warriors and acrobats.

Although Scott considers this a comedy, and not an action film, it is actually both. The opening scene is ludicrous as Bond escapes from Cuba with the help of some cleavage, and a mini plane disguised as a horse's ass. Then we have a dramatic scene of 009 running unsuccessfully for his life. This is how the entire movie plays out. One scene is quite tense and then the next is just plain stupid. At one point Bond is fighting for his life on a train against the very people who killed 009. Then, Bond disguises himself in gorilla costume. Seriously, Bond gets into and out of a gorilla suit while two bad guys stand unaware, a few feet away. The movie ends with both elements. Bond saves thousands of lives by disarming a bomb, dressed as a clown.

DVD's allow us to watch movies in ways we never could before the invention of videos. In this film it reveals a flaw never noticed in theaters. While at an auction, Bond switches a fake Faberge egg with the real one. In a theater the scene works, as it is only later revealed that he switched the eggs. However, with the ability to hit the reverse button on the DVD remote, it is plainly obvious that no such switch actually occurred. He says he did, and we the audience have to except that it happened.

Octopussy is not the best of Moore's Bond movies. That honor goes to For Your Eyes Only. It is also not the worst. That would be Live and Let Die. Like it's title, Octopussy tries to be two different things, but fails at both. 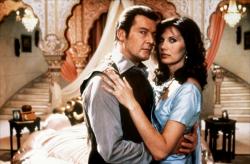 Time waits for no man.

My first thought upon seeing Roger Moore’s aging physiognomy was, “somebody’s stayed too long at the fair”. Then I remembered that he made one more Bond movie after this one. I wonder if Sean Connery’s decision to play the suave super spy one more time in Never Say Never Again (thus giving him seven Bond movies) had anything to do with Moore returning for a seventh time in A View to a Kill?

To be fair at 55 he doesn’t look bad but he is definitely starting to get an old man’s physique. Although Louis Jordan (of Gigi fame) looks younger than Moore and he was 63 at the time! As I get older myself I am appreciating Roger Moore’s unflappably snobbish Bond more and more. He is fussily unaware at times, a bit like a 20th Century Phileas Fogg (wasn’t David Niven considered for the role at one time?).

Octopussy didn’t impress me. I agree that it is inconsistent, often jumping erratically from over-the-top action to silliness. The opening action sequence is one of the best though as Bond becomes a virtual one man army. He uses a road, with swiftly approaching bad guys, as a runway and kicks some serious ass.

I was surprised to see that Lois Maxwell was still playing Miss Moneypenny. She is looking quite matronly here but still has her eye cast wistfully on 007. It is likewise comforting to see Desmond Llewelyn still in the field as Q. These two wonderfully stalwart supporting characters added much to the franchise over the years and get relatively little credit.

Memories are funny things. When the credits began and the theme song started playing it sounded familiar to me but I couldn’t for the life of me recall the singer’s name. It took me nearly all the way through to come up with Rita Coolidge. Unfortunately the title of the song “All Time High” is inaccurate in describing Octopussy. Although to be fair, and as my brothers pointed out, it isn’t an all time low either.