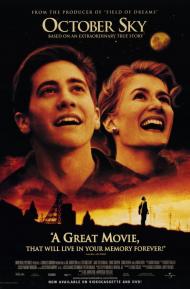 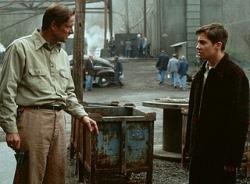 October Sky is based on the memoirs of Homer H. Hickam Jr. He was born a coalminer’s son and was inspired by the launch of Sputnik (the world’s first manmade satellite), which was visible in the night skies over West Virginia in October of 1957 (hence the movies’ title), to escape the poverty around him by becoming a NASA rocket scientist.

This was Jake Gyllenhaal’s 5th movie and first starring role. He made his debut at the age of 10 in 1991 playing Billy Crystal’s son in City Slickers. His next movie after October Sky would be the cult favorite Donnie Darko. October Sky shows that his dramatic talents were already pretty impressive as a teenager. He is completely believable as the dirt poor son of a proud coalminer.

Homer makes friends with the school geek and with the enlistment of several other boys begins trying to make his own rocket in the hopes of entering it into the national science fair. The results are bad at first with several (often comical) mishaps along the way. Eventually he manages to launch one that goes high in the sky but the boys lose track of it and it is later blamed for a fire that causes a fair amount of damage. Homer gets in trouble with the law and his father before eventually proving that it wasn’t his rocket that started the fire.

In one funny and exciting scene the boys are removing an iron rail from what they think is an old unused train track when they hear an approaching train in the distance. At first they scramble to replace the rail before the locomotive reaches them. They quickly realize they don’t have time so they begin to run down the tracks yelling for the train to stop. Of course at the last second the train detours onto another set of tracks and heads safely on its way.

The main dramatic tension in the movie is between Homer and his father (Chris Cooper). His father loves his son, but is also a strict taskmaster that wants Homer to come to work in the mines with him, thus carrying on the family tradition. Homer’s brother meanwhile receives a football scholarship to attend college and Homer’s father seems to favor the brother over Homer. There is also a teacher (Laura Dern) urging Homer to go to college and to get out of the mining life while he still can (shades of Miss Moffat in The Corn is Green).

October Sky is a true coming-of-age story about the American Dream. It is about misunderstandings and retributions between fathers and sons. It manages the difficult task of being heartwarming without being sappy. 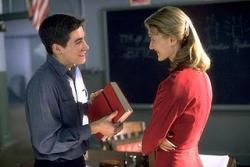 October Sky is one of the most inspiring  movies ever made.  These boys come from a poor community but dream big.  They have no money but plenty of hope.  As Patrick mentioned with the train rail, these boys use what ever parts and metal they can find.  Luckily there are a few adults around who believe in them and lend an occasional helping hand.  Most notably is their teacher. "False hopes? Do you want me to sit quiet, let 'em breathe in coal dust the rest of their life?"

Homer has to over come many obstacles including his own father, "Coal mining may be your life, but it's not mine. I'm never going down there again. I wanna go into space."  As Patrick wrote, their relationship is the heart of the film.  What father would not want to have his son give him a speech like this, "Dad, I may not be the best, but I come to believe that I got it in me to be somebody in this world. And it's not because I'm so different from you either, it's because I'm the same. I mean, I can be just as hard-headed, and just as tough. I only hope I can be as good a man as you. Sure, Wernher von Braun is a great scientist? but he isn't my hero."

Another good point this film makes is that we tend to raise up our athletes while ignoring our intelligentsia.   The movie talks about how the jocks go to college and get the girls, while the rocket boy's chance at a scholarship, or dating a cheerleader, are meager at best.  The boys rocket launches become very popular around the county and people start coming to them.  They even attract the attention of some girls, causing Homer's friend to state, "I'll tell you what's unbelievable... captain of the football team being jealous of you."

Every time I see this film I am struck by the message that their are no unsurmountable obstacles if you want something bad enough.  These boys came from nothing, but they kept their dream alive and let it take them to places they never thought possible.  October Sky is one of my favorite feel good films.