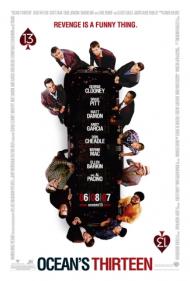 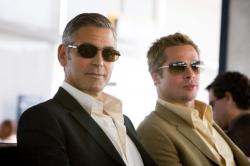 Like all the Ocean's movies, Ocean's Thirteen appears to have been more fun for the cast to make than it is for the audience to watch. Not that it isn't entertaining, because it is. In fact it's better than Twelve, if not quite as good Eleven. It has what the others had; an easy charm that provides a few hours of light escapism, but you just have the feeling while watching that the real reason these guys make these movies is because they enjoy spending time together.

All you really need to know is that the original cast is back (without Julia Roberts and Catherine Zeta-Jones) and they're involved in another heist. To give you a bit more background though, the impetus of the plot this go round is the betrayal by Willie Banks (Pacino) of Reuben Tishkoff (Gould). Banks forces Reuben out of his half ownership in a new casino they're launching together, which in turn causes Reuben to have a heart attack. The rest of the group gets together and decides to get revenge on Banks by destroying his grand opening by rigging all the games so that the house will always lose and by making sure that none of the high rollers show up and that the hotel will get a bad rating in the guide books. To pull this off they end up needing the assistance of Terry Benedict (Garcia), the villain from the first two movies.

The biggest problem with this movie is its large cast. There's just too many characters to go around. The writers, as always, try to give each of them something to do, which is admirable, but in the end is just too much to fit nicely into one story. We all know that Pitt, Clooney and Damon are the big names and they're the ones we want to see. We don't need the subplot at the Mexican dice factory. And the oriental acrobat is given a big build up to a stunt he will do in an elevator shaft, which sounds exciting, but is then given very little screen time. So little that they might as well have not included it at all. Pitt especially is deprived of screen time. Damon gets a few funny scenes and Clooney is the charming star as always presiding over the whole affair with charisma and style.

Enjoying this movie isn't hard. It moves quickly and contains enough humor and flash to keep you entertained, but this is like sparkling water rather than a double vodka martini. It goes down smooth and easy, but it lacks any real bite.

Of course this series of movies is based on the original Ocean's 11, starring the original rat pack led by Sinatra, Martin and Davis, but these movies bear only a cursory resemblance to the original. This is mainly due to the metro-sexualization of the leads. Let's face it, these movies are Chick Flicks pretending to be guy movies. Tremendous care is paid to the characters looks and dress sense. There is no nudity or vulgar language. Despite the location and these guy's profession, none of them are womanizers. And there is even a scene in this movie where Pitt and Clooney get teary-eyed while watching Oprah (who also makes a cameo). These are not elements of a guy movie. 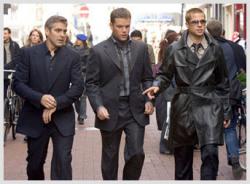 Ocean's Thirteen is a modern day Robin Hood. The thieves are now the hero. They rob from the rich and donate to charity. I liked them better when they were just out for themselves and less politically correct.

Like the other film's in this series, Clooney and Pitt merely walk through the movie without ever being forced to really act. They simply smile and pose. The greatest robbery done in this movie is not on the screen, but the paycheck these two guys received for appearing in it.

Damon fares better as his Linus has father issues and an awkward seduction scene. The best characters this time around though, are Virgil and Turk. I liked the whole Mexican dice factory on strike sequence. Afleck and Caan also have the funniest exchange of dialogue as well. When Afleck is quickly trying to tap into a computer, Caan asks, “Are you in yet?” And Afleck responds, “I hate that question.” as if he has been asked it before.

Like all of the Ocean movies, you will enjoy this one solely based on if you find these guys charming. The plot is too coincidental and preposterous to comment further on. The one and only thing to appreciate is your affection for any of the stars. 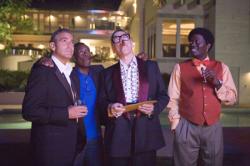 Although it's a slight improvement over number Twelve, Ocean's Thirteen is far too coincidentally lucky. No matter how convoluted or implausible the plot device things always work out for this bunch. I agree with Eric that Clooney and Pitt merely go through the motions. They are content to let their images do their acting for them, with an assist from their well-tailored suits and carefully groomed hair.

This shouldn't really come as a surprise since, as Scott wrote, these movies seem to be all about giving the cast an excuse to get together and goof off. In support of this idea are the many inside jokes Soderbergh and the gang incorporate into the movie, from Matt Damon's prosthetic nose (which makes fun of the fact that Terry Gilliam wanted Damon to sport a fake nose in The Brothers Grimm but the studio vetoed the idea) to the name of the scent Damon's Linus uses to seduce Barkin's Abigail. It's called “The Gilroy” and named for Tony Gilroy who penned all three of the Damon Bourne movies as well as wrote and directed Michael Clayton which starred George Clooney and was produced by Steven Soderbergh.

Then there's the final scene at the airport where Clooney and Pitt step completely out of character as Danny and Rusty and make references to each other's real lives. Pitt tells Clooney to, “Try to keep the weight off between jobs next time.” (Clooney had packed on some pounds for his role in Syriana and injured his back during filming.) Clooney tells Pitts he should, “Settle down and have a couple of kids.” Anyone on the planet should get that reference.

As much breezy entertainment as these movies provide it's clearly nowhere near the level of amusement the cast and director take in making them.

There are a few clever moments to be sure. Once again Elliot Gould's Reuben Tishkoff steals his scenes and remains my favorite member of the group. Al Pacino seems bored though and his performance lethargic. I enjoyed the way they continued the running gag of having a member of Linus' family impersonate some form of law enforcement agent. Linus himself posed as a Nevada Gaming Commission officer in Eleven, his mother pretended to be a US Marshal in Twelve, and this time around his father acts as an FBI agent.

And there's finally a nod to the Chairman of the Board, Old Blue Eyes himself, the original Danny Ocean, Mr. Frank Sinatra. At one point Rueben says to Banks, “There's a code amongst guys who shook Sinatra's hand!” and later Danny tells Banks, “You shook Sinatra's hand. You should know better.” As should the audience that keeps paying money to see these recycled plots over and over again. 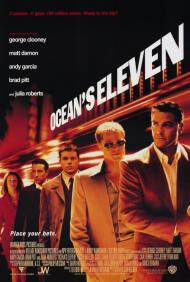 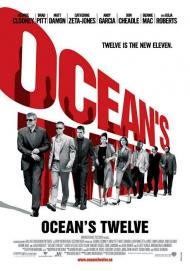