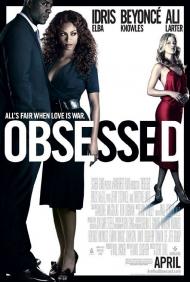 Ali Larter and Beyonce Knowles face off over Idris Elba in Obsessed.

Obsessed is one of those movies where you just want to slap every single character upside the head, although perhaps it would be best to just slap the writer, director and editor. Not only is it a rip-off of Play Misty for Me, Fatal Attraction, Hand that Rocks the Cradle and probably a dozen other movies, but it's a really bad rip-off of those movies. Implausible and poorly written, it contains unsympathetic characters behaving stupidly in dumb situations right up until its inevitable ending.

Idris Elba (HBO's The Wire and the American version of The Office) plays Derek Charles, a successful businessman, husband and father. Heroes' Ali Larter plays Lisa, a new temp at his office who starts flirting with him. Derek, flattered by her attention, responds with mild flirtation of his own, but when her flirtations become overt, he repulses her advances. Sadly for Derek, Lisa isn't just a flirt, she's completely delusional and has created in her head the idea that Derek is madly in love with her and refuses to leave him alone, even after her time as a temp is over.

Stupidly, Derek never tells anyone about Lisa's behavior, apart from his best friend, played by Jerry O'Connell. He doesn't tell his wife Sharon (Beyonce in her first non-singing role) or even Human Resources, thus pretty much opening himself up to a whole bunch of problems. Problems that come to a head when Lisa shows up at a business retreat and slips him a roofie in a scene that never goes anywhere.

You can guess the ending so I won't be giving anything away when I tell you that Larter and Beyonce end up facing off at the end of the movie. In fact, the ending of the movie is clearly telegraphed in the very first scene with one of those, "Gee, I wonder if that's going to come back into it," moments. Although that final scene is mildly entertaining and vaguely satisfying, it would have been even more satisfying if the two women had teamed up and beat the crap out of Derek for being such an idiot.

The thing about Fatal Attraction or The Hand that Rocked the Cradle is that in those movie you really believed that Glenn Close and Rebecca De Mornay were capable of just about anything. You knew they would stop at nothing to get their revenge. Larter's character here though, is just never very threatening. You almost feel sorry for her. I certainly had more sympathy for her than I did for Derek. And Beyonce comes across as a domineering bitch. Just how she thinks that Derek could be having an affair when clearly she keeps his testicles locked up in a box is a mystery.

Being rated PG-13, there isn't even the titillation of sex or nudity to distract the audience from the weak script. The closest it comes to sexy is having Ali Larter open up her trench coat to reveal that she's only wearing lingerie underneath. It would take a lot more than that to make up for this script.

Seeing as how this is a rip-off of earlier and far better movies, there's no reason to watch this one at all. You'd might as well just rent one of those earlier films.