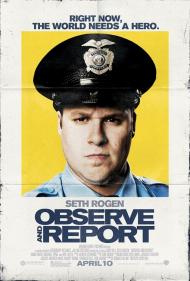 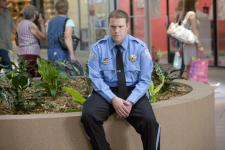 This is a bit of an odd mix of a movie. It's a dark comedy that is funny, but not much fun. It plays in part like a tribute (or is that a spoof?) of Scorsese's Taxi Driver, but without as much impact (or talent for that matter). In the end it's more interesting than entertaining, and yet I still enjoyed it in an odd way.

Ronnie has a rival though, both for the affections of Brandi and in the pursuit of the flasher in the form of Detective Harrison (Liotta). Harrison is the cop assigned to the flasher case, and he doesn't appreciate Ronnie's bumbling help. Determined to prove to Harrison and everyone else that he's more than just a joke, Ronnie applies to become a police officer, but fails his psychiatric evaluation when he reveals that normally he is on mood-stabilizing drugs, but has stopped taking them recently.

Because this is Seth Rogen and because Ronnie is such an idiot, it's easy to laugh at him at the beginning of the movie, but as time goes on and the movie gets darker, the laughs become harder to come by. Ronnie's mother, for instance, is an alcoholic and her behavior can be laughed at, but at the same time it's very sad. At times Ronnie is so unbalanced that you begin to suspect that he's one of those people who will go crazy and start killing people, only to be described by his neighbors as being such a nice, quiet young man.

The gist of the plot is reminiscent of Taxi Driver, right down to Ronnie's voice-over narration. Ronnie isn't quite Travis Bickle though and Rogen isn't even close to being De Niro. There are just enough similarities that if you're familiar with Taxi Driver you will see it, but if you've never seen it, it doesn't really matter.

I'm not a big fan of Rogen's, and this movie didn't change that. He handles the comedy fairly well, but he doesn't have the dramatic skill to really sell the character or the movie. It's a tricky character to play because you have to be funny, serious and sympathetic. That's a trifecta that Rogen just isn't able to pull off.

The movie also lacks a boldness and fails to really follow-through on its premise. Without giving the ending away, I have to say that I expected something more shocking and daring. The story seems as though it is building some dark ending, but ends up playing it safe instead.

There are a lot of feel-good comedies out there. It's a bold choice to make a feel-bad one, and yet that's exactly what this movie is. Although it has what I guess you could call a happy ending, it's impossible to feel good about it. 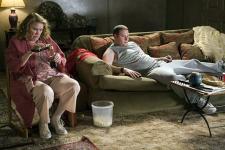 Celia Weston plays the mother of the year.

Observe and Report was released just three months after Paul Blart: Mall Cop. Did someone suddenly decide that security guards at a shopping center needed more celluloid exposure? Both are about a mall guard who wants to be a policeman. Both are in love with a girl who works there, and both still live with their mother.

The big difference in the two movies is that Paul Blart is a likable character. He is a single father after his wife deserted him and his daughter. Ronnie Barnhardt is simply disturbed. No matter what his emotional/medical condition is, he is someone who would be very difficult to be around. It is no wonder Brandi tries to avoid him and Harrison ditches him on the wrong side of town.

Ronnie makes many mistakes throughout the movie. He decides to get off his meds. He takes Brandi on a date, and then thinks she loves him, even though she clearly can barley stand his presence. How can I root for him when he is so bothersome.

With the main character so off putting, it was left up to the supporting cast to keep things flowing. Faris has a few good moments, but I laughed hardest at Ronnie's Mom. "When Ronnie was in highschool I fucked all of his friends." She announces to Ronnie's co-workers in front of him.

Perhaps to separate itself from the family friendly Paul Blart, Observe and Report is rated R. This is mostly due to the swearing. "Why did you stop, motherfucker?" Brandi says to Ronnie while having sex. There is also some breast shots, and a photo of the flasher's penis is prominently featured in one scene. All is to no avail. With such a messed up lead character nothing else really matters.

Don't get me wrong. Paul Blart: Mall Cop was not a great movie either, but at least you wanted the main character to succeed. A great film may have been if the polite Blart was living in Ronnie's rude world. That way you have a likable, mild mannered lead surrounded by obnoxious, foul mouthed intoxicated folks. There would have been ample opportunity for laughs. Something both films on their own lacked.