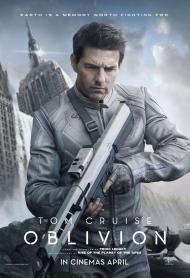 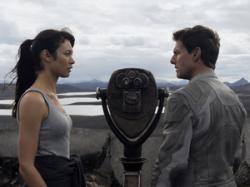 Writer/Director Joseph Kosinski has said that Oblivion is, in part, an homage to the science fiction films of the 1970s and it's easy to see what he means. 40 years ago, the part of Jack would undoubtedly have gone to Charlton Heston. It has that last rational man on a planet gone to seed feel that Heston made his specialty. It's an old fashioned Sci-Fi film made with today's special effects.

Tom Cruise, who turned 50 during filming, stars as Jack, a drone repairman who works with his partner Victoria, as the last two humans on a devastated Earth rendered uninhabitable by nuclear bombs that were detonated as the result of an alien invasion. He and Victoria are there to oversee the drones that guard giant machines which are harvesting the Earth's oceans to take to Titan, the moon of Saturn, where the remains of the Earth's population are now living. The remnants of the alien invaders still roam the planet looking to destroy what they can while they have the chance. However, just two weeks shy of finishing their task, Jack's ordered routine is disrupted when he is captured by the Scavengers, as the aliens are called, and when an Earth ship containing a woman Jack has been dreaming about, suddenly crashes on the planet. What does it all mean, and will Jack be able to figure it all out before it's too late?

It's an intriguing story, even if it does feel derivative of other films that have come before it. There's just enough mystery to hold your interest, even if it is fairly easy to see the big twist coming. In fact, the movie is actually more entertaining before you know the answers to it all. The mystery is more rewarding than the solution. The ending is not only predictable it's also not that well filmed. It feels as though those final moments are being milked for tension when they should have happened much faster.

The two things that really makes this movie worth watching are Tom Cruise and the look of it all.

Cruise is like the Energizer Bunny. His career has taken some knocks, but he just keeps on going. Although his movie choices have been fairly safe ones of late, he still knows how to act. It's his very human portrayal of Jack that keeps you interested in seeing how this story will turn out. And whether or not he's had work done to keep his youthful appearance, he still makes a very believable action star.

Visually, the film is quite stunning. Much of it was filmed in Iceland and the scenery is breathtaking and looks very alien. Jack and Victoria live on a platform above the clouds that looks like an Apple Store that someone has converted into Penthouse apartment. Jack flies a ship with a bubble cockpit that also looks as if it may have been designed by Apple, as do the heavily armed drone robots. Jack's ship flips and flies, rotating every which way, allowing for several well staged battle scenes.

This isn't a perfect film, but it is a fairly entertaining one. It just needed that “Soylent Green is people!” or “They blew it up! God, damn you! Damn you all to hell!!!” moment for the ending. It tries for that effect, but never quite gets there. 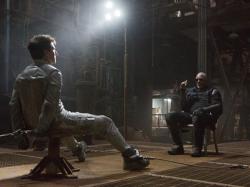 I understand exactly what Scott is saying about the derivative nature of Oblivion, but as he also points out, it is done more in the spirit of a fond homage than merely being an opportunistic copycat. I applaud the fact that it isn't a remake, a reboot, or a sequel, which means that by today's big budget Hollywood standards it is, in fact, quite original.

And although it is visually arresting -I liked Scott's Apple Store analogy- it doesn't over rely on CGI.  It maintains a consistently intimate feel, even as it deals with the fate of the entire human race, thanks mostly to the fact that the cast is limited to only about half a dozen speaking parts. Tom Cruise appears in nearly every scene and gives one of his most engaging performances in years.

Oblivion doesn't borrow from just sci/fi movies of the late 60s and early 70s though. It also incorporates a new take on an old romantic twist dating all the way back to the original Love Affair in 1939; lovers meeting atop the Empire State Building (see photo in Scott's review). This turns out to be the least satisfying aspect of the plot, though I can't say specifically why without giving too much away.

Why is it that dystopian future movies are always set near the ruins of famous landmarks, which are somehow always half buried in the ground? And when Beech (Freeman) tells Jack that he will find the truth out in the restricted high-radiation area just beyond his normal patrol limits, it immediately brings to mind the scene in the original Planet of the Apes where Dr. Zaius tells Taylor that he won't like what he finds out in the Forbidden Zone. This is definitely a character Charlton Heston would have played.

So Oblivion is a hodgepodge of  various and sundry sci/fi tropes but it still manages to entertain. The central mystery is compelling enough and I enjoyed the way its various layers are revealed. Again agreeing with Scott, I found the ending to be slightly disappointing. The final revelation of all the facts seems anticlimactic and the dialogue is slightly schizophrenic too. Cruise goes from quoting the famous last stanza of the 19th Century poem Horatius to the most vulgar and common of expletives.

Despite its flaws, however, I quite enjoyed Oblivion. It is somehow comforting to see just how remarkably little Tom Cruise has changed since his Top Gun glory days. His youthful appearance is becoming almost Dorian Gray like. He remains a presence to be reckoned with on the silver screen and Oblivion is much better because he's in it.

Although it may have some elements of those late 60s/early 70s science fiction films, Oblivion plays by its own rules. Instead of that one big reveal moment that they seemed to all have, there is a series of revelations. Sure we can guess the mysteries as the film plays, but the fun is also in watching Jack Harper discover and react to them.

Right from the start we see that Jack has already been questioning the world around him. His relationship with Victoria is key in revealing his psyche. He ponders and dreams of the past while Victoria thinks only of their future. She acts like his wife/lover/care taker and co-worker, yet they have very different goals and out looks. Sally, who directs their work from the space station, asks the repetitive question, "Are you an effective team?" which Victoria always answers with a "Yes" even though we quickly see that Jack has very little genuine affection for her.

Although the woman from his dreams becomes the more important relationship in the story, the one Jack shares with Victoria is far more fascinating. She does several things in the film that are never explained. Jack tries several times to get her to open up and see things differently, yet she remains steadfast in her beliefs. One minute she seems in love with Jack and the next she betrays him.  Why she acts the way she does is one of the larger questions the film never answers.

I agree with my brothers. Tom Cruise easily looks ten years younger than his age. More than that though, he is a very competent actor. In Jack we find a man trying to see through some very thick fog. He knows in his heart that what is around him is not as clear as Victoria believes. He goes about his job of fixing the drones as a repetitive duty, while his mind is always thinking of other things. Cruise's performance allows us to see Jack as a man struggling to understand the world around him, thus making Jack very relatable as well as vulnerable.

Oblivion seems a little too cute at times with the famous landmarks that Patrick mentioned. How amazingly coincidental is the Empire State Building conveniently located? During a chase/dog fight in his ship, Jack flies over the broken torch once held by Lady Liberty, in a direct nod to The Planet of the Apes (1968).

Like most science fiction films, Oblivion does not answer all of our questions but it does have a fascinating, albeit unoriginal, setting and a hero worth rooting for. Add in a decent mystery and you have a very solid piece of film entertainment that will pull you in and keep you watching.