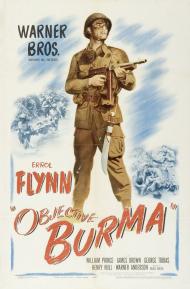 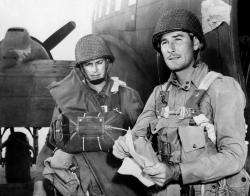 On the back of the DVD case for Objective Burma, Errol Flynn is credited as saying that this movie is, "one of the few features of which I am proud." Although this is not as entertaining as The Adventures of Robin Hood, it is certainly a picture to be proud of.

Flynn stars as paratrooper Captain Nelson who is assigned to take his men into Japanese occupied Burma and blow up a radar station in preparation for the allied invasion. That, though, is just the first third of the movie. The rest of the movie is about the soldiers fighting and avoiding the Japanese army as they try to get back to their friendly side.

In an effort to lose the pursuing Japanese, Nelson splits up his men into two groups and meet at an arranged rendevous. When Nelson gets there he discover a gruesome sight. Made in 1945, the mutilated bodies are not shown, but the actors reactions are enough to convey the torture they must have gone through. It is an effective scene gauged only by the actors reaction to a sight that we never actually see.

My favorite scene in the movie is the climactic battle on the hill top. The Americans are shown, at night, hiding in dug out trenches while waiting for the Japanese to attack. You can see the fear on their faces as clearly as you can the sweat. As a former actor, Raul Walsh really knew how to let the acting carry the movie. There are plenty of fight scenes but Walsh gives the actors plenty of face time as well, to allow the audience to connect with them. So much time in fact that the movie runs over two hours. A little editing at the beginning and fewer shots of the men back at base would have helped some.

Although Flynn is the big star here you may recognize a couple of others faces. Tobias would later be known on television as Abner Kravits on Bewitched and Beaumont would become one of televisions most famous dads as the Beaver's father on Leave it to Beaver. Veteran actor Hull appeared in movies from 1917 to 1966. He and Flynn share the movies most famous pieces of dialogue. As they are about to jump out of the plane, the nervous Hull asks, "What if my parachute doesn't open?" Flynn smiles and responds, "Then you'll be the first one on the ground." 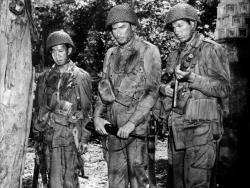 What I found most interesting about this rousing war picture was the fact that it was based on an actual mission that had only recently concluded. WWII was still going on at the time, which allowed for the use of actual military equipment. All the weapons, uniforms and gear used by the men in this movie are authentic. The plot may have been based on an actual mission but it also bears a striking similarity to the 1940 MGM picture Northwest Passage, starring Spencer Tracy. A fact producer Jerry Wald later admitted.

This movie is pure propaganda. This is somewhat forgivable since we were still at war with the Japanese but there is still an element of racism at play. The Japanese are called monkeys several times in the film, and in one impassioned speech, after witnessing the remains of tortured and maimed soldiers in the scene Eric mentioned, the character played by Henry Hull gives this speech. “This was done in cold blood... by people who... who claim to be civilized. Civilized? They're degenerate immoral idiots! Stinkin' little savages! Wipe 'em out, I say! Wipe 'em out! Wipe 'em off the face of the Earth! Wipe 'em off the face of the earth!” I have never seen a WWII movie where the Germans are referred to in this manner, just as German Americans weren't place in internment camps during the war as Japanese Americans were.

Despite the somewhat over zealous script, this is a riveting action packed war movie. Raoul Walsh was indeed a great director. His career spanned 6 decades, from the 1910s to the 1960s. As Eric wrote, he really knew how to execute tense battle scenes as well as being a good actor's director. Although according to Hollywood legend by way of William Prince, who played Lt. Sid Jacobs, the only direction Walsh gave the actors was, “All right boys, no Hamlets in the jungle”. Whatever the case he got great performances out of his cast.

This is easily some of Errol Flynn's finest acting. He is still as rakishly handsome as ever but his charm is turned down a notch and replaced with a sort of stoic wisdom and courage. In real life he had tried to enlist but was turned down due to his bad health. He had a bad ticker and would die from a heart attack at the age of 50.

To be fair the script also includes some less inciting language. When Lt. Jacob's learns that war correspondent Mark Williams contributes to his hometown paper he says, “What do you know, it's a small world, isn't it?” Williams replies, “Yeah, and it's getting smaller. If only more folks back home would realize that Crane Street, Schenectady runs all the way to Burma, this would be the last war.”

The British were none to happy about this movie. It was pulled from theaters there after one week due to outrage from British veterans. In real life the Burma campaign had been fought mostly by British and Australian soldiers, whereas this film makes it seem as if it was pretty much all-American. The picture did eventually get re-released in England but it was proceeded by an onscreen apology. Despite whatever minor flaws this movie possesses Objective, Burma! remains one hell of a war picture! I had no idea just who was going to live and who was going to make it out of the Burmese jungle alive.