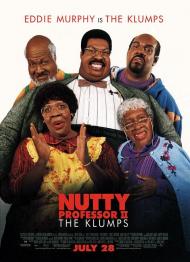 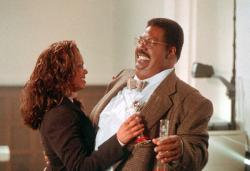 Eddie Murphy returns as overweight scientist Sherman Klump and the rest of the Klump family. This time around he has invented a youth serum. Of course his alter ego, Buddy Love, is never very far away, always looking for an opening to spoil things for the mild mannered Sherman. Janet Jackson is underused as his colleague and love interest.

This movie takes the formula of old Walt Disney movies from the fifties and sixties and updates them. The biggest notable difference is the heavy reliance on bathroom humor and tasteless sex jokes. For example, Fred MacMurray was never subjugated to being raped by a giant hamster as one unfortunate character is in this flick.

Still this movie does offer up a few laugh out loud scenes, the infant Buddy doing his take on the "Got Milk" ad is one of them. And as always Eddie Murphy gives his all as the various Klumps. He is especially appealing as Sherman's parents. Their scenes together in bed are brilliant from an acting standpoint. It is; in fact, hard to believe they are being performed by the same person.

Still the laughs do not come fast enough to make up for the fact that this movie has very little plot, and what there is of one is completely predictable. The first installment of this franchise had something else that this one lacks. Heart. In that movie I really cared about Sherman and agonized with him over his obesity. This time, however, I just didn't give a damn. 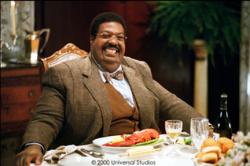 Nutty Professor II: The Klumps is a wonderful demonstration that comedies almost always get overlooked when it comes to awarding actors. Except in the supporting actor/actress categories I cannot think of an Academy Award that has gone to a lead comedic role.

Eddie Murphy plays 6 different characters. Two of which are women. Each has a distinct personality and at no time do you think of them as Murphy. From father Klump's insecurities to Grandma's libido, each character has their own traits.

The plot, as Patrick has pointed out, is nothing to complicated. Sherman Klump invents a youth serum and Buddy Love comes back to foil Sherman's success. Janet Jackson is Sherman's new girlfriend. He may be fat, but damn he gets some fine women. I was hoping Janet would portray her parents. But no, she is just there for a pretty face. This is Murphy's movie and a great job he does. One day the Academy will recognize the brilliance in comedy and Eddie Murphy may eventually get an Academy Award. 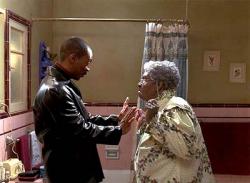 I agree with Patrick. Too many of the jokes are tasteless and vulgar. The humor is obviously aimed at the very young or the very easily amused. If watching a fat person fart or seeing a baby pee in someone's face is your idea of comedy then this is the movie for you.

I also agree with Eric that Eddie Murphy proves he's a great character actor. He literally and figuratively buries himself in these different parts. Sure, the makeup helps, but he perfectly inhabits these characters. Murphy never makes reference to his time on Saturday Night Live, but the Klumps could easily have been a recurring SNL sketch, even if it would have been impossible to perform them live.

The actual plot, with the youth formula and Buddy Love, is silly and feels hastily thrown together. The Buddy Love character is obnoxious and underused. The only person more underused is, as Patrick said, Janet Jackson. You could have put any moderately attractive woman in this generic part and it would have been fine.

You can't deny Eddie Murphy is a very talented comedian. Why then, does he always star in such shitty movies?