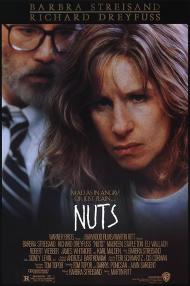 Nuts is a film that thrives or dies on the performance of Barbra Streisand. If you're a fan, then you get the pleasure of watching her dominate a movie in ways only she can. If you're not, then you will be put off by this vanity piece, which allows the actress to play a role where she gets to prove everyone around her wrong, while grandstanding at every turn.

Streisand plays an upscale prostitute, Claudia, who is accused of killing one of her customers. Before the actual murder trial can begin she must go through a competency hearing to determine whether or not she is mentally incompetent. If she is proven to be "nuts," she ends up in a hospital. If she is able to prove her sanity, she gets her trial and possibly a prison life sentence.

Once the hearing begins we learn two things. The first is that Claudia has some deep seeded anger towards her parents. The details eventually come out in dramatic fashion. The other thing is that Claudia is a very independent person who only wants to play by her rules. Her life is on the line, yet she acts like a drunk at a frat house. She disrupts the court every chance she gets and ignores constant warnings to the contrary.

Streisand's performance is uneven. In one scene she over acts when she yells, "It's what I wanna Know!" The murder scene is down right horrible as she tries to act scared. Her pathetic attempt to run away is nearly laughable. However, she is brilliant in the more subtle scenes. I liked the banging the glass part. It expresses as much emotion and meaning than any of the dialogue. She is also good when she rattles off this line. "Are you crazy? Oh, I'm sorry. That's YOUR question, isn't it?" It reminded me of just how funny she can be.

The entire high end hooker angle makes little sense. Claudia explains that she has dinner with a man, and if she likes him they have sex later. That's not a business deal, that's a date. A man does not spend $100 for dinner on the chance that the whore he is feeding may have sex with him. Men go to prostitutes to avoid such frustration. No man is going to jump through hoops and then pay $500 to have sex with a unattractive 45 year old.

Streisand was not right for the role. In the most provocative scene Claudia describes her occupation to the prosecutor. "I'm talking about my mouth on your mouth, and my tongue anywhere you want it. I'm talking about indulging your every fantasy, and then giving you those fantasies one by one." The line is intended to make everyone uncomfortable with it's frankness. She does not pull it off. She simply sounds condescending. Had an attractive actress spoke that line, it would have caused discomfort as it would have been a turn on.

Although I could sympathize her having a rotten childhood, I never really cared much about Claudia, She is a prostitute, which is criminal. She admits to providing her customers with alcohol and grass. The fact that she takes home a stranger and then gets hurt is like a child playing around a hot stove after being told many times not too. After leaving court, her very first action is to steal a scarf. Claudia invites crap into her life and I am supposed to somehow feel sorry for her?

Nuts has some decent dramatic scenes, but as a whole it is nothing more than a chance for Streisand to ham it up. 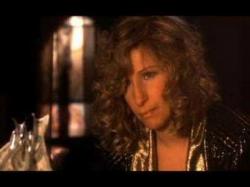 With the exception of her Star is Born remake Nuts is Barbra’s campiest movie. The scene where Leslie Nielsen says to her “What are you gonna do now, go fuck somebody else?” and then proceeds to chase her around her fancy ass Manhattan apartment is unintentionally hilarious. Laughs are also inappropriately elicited when she describes in court how much she charges for different sex acts. "I get four-hundred dollars for a straight lay, three-hundred for a hand job, and five-hundred for head."

I agree with Eric that this is a vanity project and that Streisand is miscast. I also concur that her acting is inconsistent. It varies from amateurish (the scene where she beats up her expensive lawyer and gets carried kicking and screaming out of the courtroom comes to mind) to brilliant (her reconciliation with her mother is extremely moving). Meryl Streep herself couldn’t deliver these lines with more feeling, "You think because you toss this word "love" around like a Frisbee we're all gonna get warm and runny. No. Sometimes people love you so much their love is like a goddamn gun that keeps firing straight into your head. They love you so much you go right into a hospital. Right, Mama?"

The impressive cast boasts four Oscar winners, Streisand, Richard Dreyfuss, Maureen Stapleton and Karl Malden. Veterans Eli Wallach and Robert Webber were both troopers for going toe to toe with La Streisand in this courtroom drama which was based on the Tom Toper play. Most of the movie, in fact, takes place in court. Nuts has an intentionally claustrophobic feel to it. Only at the end do we go out into the crowded New York streets with Claudia. (Eric, you made me laugh when you mentioned her stealing the scarf in this scene. How criminal!)

For all its flaws Nuts provides solid entertainment. It is a minor camp classic, and sadly - to date - is the last time Streisand really stretched herself as an actress in a starring role.

For someone so talented, Barbra Streisand has often been miscast. Hello Dolly, All Night Long, Yentl and this one are all films for which she was either the wrong age or the wrong type or just not sexy enough for the character she was portraying. While 4 movies might not seem like that many, when you consider she's only made 18 movies to date, that's 22% of her roles where she's been miscast.

In this film, Barbra is at least 15 years too old and not nearly sexy enough to be playing Claudia. Debra Winger, 13 years Streisand's junior, was reportedly the studio's first choice for the part, but she was unavailable. Her scene about how much she gets paid for sex and when she pulls a Sharon Stone on Richard Dreyfuss, not only aren't sexy, but nearly caused me to throw up in my mouth a little bit.

There are some dramatic moments in the film and fine acting from, not just Streisand, but also Dreyfuss, Malden and Stapleton. However, some of the dialogue is way over the top melodramatic. I'll use the line you mention Patrick about love being a Frisbee as an example. I mean, who talks like that?

You both mention the unintentional comedy of the murder scene and I agree. The humor is ratcheted up a notch because it features Leslie Nielsen as the man who gets murdered. I just kept thinking, that's Frank Drebin from Police Squad. He's not going to hurt anyone.

With a more attractive and younger actress in the lead and a toned down, more subtle script, this movie might have been something. As it is, it just about manages to be the biggest name cast to ever appear in what is essentially a Lifetime movie of the week.