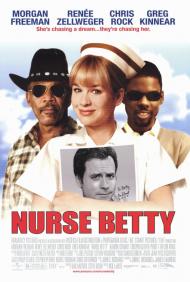 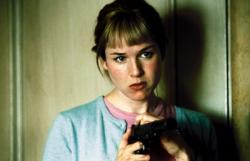 If I had to use just one word to describe Nurse Betty, that word would undoubtedly be quirky. And I mean that in a really, really good way. It is a funny black comedy with unusual situations as well as a fairly bloody murder and some genuine acts of violence. It is also one of the most enjoyable movies I've seen in this dismal summer movie season.

The plot is a little complicated so try and stay with me on this one. Renée Zellweger plays Betty Sizemore, a waitress in a diner. Her husband is a car salesmen who steals a large shipment of drugs. The people from whom he stole the drugs send two hit men, played by Freeman and Rock, to kill him. Betty witnesses her husband's murder at the same time she is watching her favorite soap opera. Her mind goes into to shock and to protect herself from having to deal with the reality of what she witnessed, she retreats into the world of her soap opera, believing herself to be the ex-fiancée of a doctor on the show, played by Greg Kinnear. Still with me? Then Betty flees the small Kansas town in which she has lived her whole life, heading for LA to reunite with her imaginary former love. The two hit men follow her, hoping to finish the job and recover the drugs, which, unbeknownst to Betty, are hidden in the trunk of the car she is driving. From there the plot gets really strange.

Renée Zellweger is the glue that holds this somewhat bizarre plot together. Her sweet portrayal of Betty makes you want to put your arm around her and tell her that it will all be all right. She displays more charisma in any one of the scenes in this move then she did in her entire role in the deplorable Me, Myself & Irene. She is as charming and innocent here as she was as Dorothy Boyd in the role that first brought her attention in Jerry Maguire.

Morgan Freeman and Chris Rock are also quite good in the roles of the two hit men who chase Betty halfway across the country. Rock has some particularly funny moments, transforming from ruthless killer to enraptured soap opera fan. Although, the eleventh hour surprise concerning their relationship to each other seemed out of place and added little to the plot.

The other star, Greg Kinnear, is as charming as always in the role of the smarmy soap star. Yet once again he is cast as the supporting character, as he was in Sabrina, Mystery Men, You've Got Mail, and As Good as It Gets. When will this talented actor be allowed to star in his own film?

The only sour note in this otherwise great film, is the climax. After this terrific setup it almost seems as though the writers didn't know how to wrap it up. The final scene between Renée Zellweger and Morgan Freeman seems strained and melodramatic. As does the revealing moment about Freeman and Rock's characters, as I mentioned before.

Still, for it's sheer quirky comedy, I can not help but recommend this film. Just be prepared for something a little different. 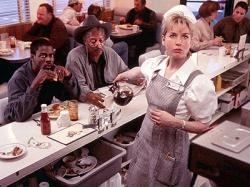 Nurse Betty is a humorous look at what happens when we allow our fantasies to seem real. Renee Zellweger stars as a soap opera fanatic who goes to Hollywood in search of a character from a soap, whom she believes she once had an affair with. Obviously she has lost her sense of reality, but she is so gently sweet and sincere that you can't help but root for her. Even though you know full well that reality is going to eventually catch up with her.

Morgan Freeman plays a hetman chasing Betty. Actually he is chasing what is in her car's trunk. Like Betty, he is having trouble dealing with reality. His fantasies are about Betty. He constantly looks at her photo and imagines what she is like. He gives her a personality; compares her to Doris Day. He imagines he's dancing with her at the Grand Canyon. He convinces himself that he is in love with her. Both Betty and the hetman have moments of clarity. These scenes are frighteningly sad. Imagine being told that everything you hoped, desired and thought to be true was not.

This is a funny film with several scenes of graphic violence and blood. That is the big flaw. The utterly inconsistent flow of the movie. One minute you are laughing as the cute, naive Betty explains straight faced how she had a relationship with someone who really doesn't exist and the next there's blood spurting on her chest. Its like putting Shirley Temple in a Quentin Tarantino film. 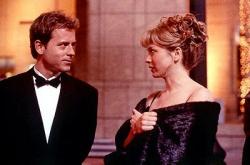 Like my brothers I enjoyed this movie quite a bit. Renee Zellweger gives an impressive portrayal of the title character. Morgan Freeman, Chris Rock and Greg Kinnear are, as noted above, very good. Though this movie has some very funny moments, I was left with a feeling of sadness when it was over. Especially touching is the tragic ending of Freeman and Rock, although as hit men it may be hard for some to feel sympathy for them. To me, this movie symbolizes how thin the line between actual reality and our perception of it is.

One key to this film's success is the fact that as surreal as the story and events become, the characters remain completely believable. They are what make Nurse Betty work. The script is fairly good, yet could easily have been a disaster with a less talented cast. I agree with Scott's use of the word quirky, at least as far as main stream Hollywood is concerned. And though there is a decent amount of blood, I did not feel that it was nearly as out of place as Eric did.

This movie has heart and humor, and moves along at a good speed. A real moment of clarity or truth is all that is lacking. In other words there is no big pay-off. Still it is an amusing movie that is head and shoulders above most of the tripe released this summer.