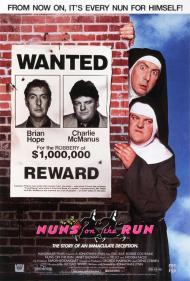 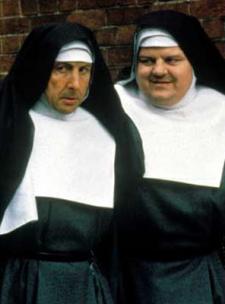 Eric Idle and Robbie Coltrane in Nuns on the Run.

Of all the Monty Python members, Eric Idle is second only to John Cleese in his attempts to "make it" in America. While Cleese is more famous in the US, it's not for lack of trying by Idle. He has done television, voiced cartoons, played supporting parts and even headlined a couple of movies. Of all his attempts, Nuns on the Run, in which he stars with Robbie Coltrane, is probably his best.

Idle plays Brian Hope, an English gangster who, with his partner Charlie (Coltrane), longs for the old days of crime when they didn't have to carry guns and no one got hurt. Together they hatch a scheme to betray their crime boss and steal the money they're meant to be stealing for him, for themselves and then fly off to Rio. Things go wrong during the robbery and Brian and Charlie never make it to the airport though and instead end up disguised as Nuns in a Catholic Teacher's college where they unsuccessfully try to lie low until the heat blows over.

Okay, so Idle and Coltrane make two very unconvincing women, but that's a problem with most cross-dressing comedies. They're more convincing than Jack Lemmon and Tony Curtis certainly, although I'm not saying this movie is as good as Some Like it Hot, just that sometimes you have to accept that no one can tell these aren't really women.

Some of the funniest lines in the movie revolve around religion, mainly Catholicism, but hardly in a mean way, just a gentle poking.
"God is like a shamrock. Small, green and split three-ways."
"We have to go on sinning in order to be saved and go to Heaven. That's how Christianity works. That's why it suits so many people."
"It makes no sense to anybody. That's why you have to believe it. That's why you have to have faith. I mean if it made sense, it wouldn't have to be a religion, would it?"
And this memorable exchange: "He was also a dove." "Isn't that a metaphor?" "No, it's a bird."

Along with Idle and Coltrane, Camille Coduri also stars as Brian's young girlfriend. Camille is best known today as Rose's Mum on the new Doctor Who. She's quite the looker here and has a few funny slapstick moments as the very near-sighted and slightly ditzy young blonde.

Overall this is a fast paced and enjoyable comedy. It comes nowhere close to matching the wit of a Python film, or even A Fish Called Wanda, which it clearly emulates in some ways, particularly the ending. It is though quite funny in parts and more broad in its appeal, meaning that while fans of Python will enjoying seeing Idle, you don't have to be a fan to find this movie funny.

Eric Idle and Robbie Coltrane are Nuns on the Run.

Nuns on the Run is like a cross between Some Like It Hot and Sister Act. Idle and Coltrane make like Curtis and Lemmon by dressing in drag in order to escape a mob hit. And like Whoopi Goldberg in Sister Act they disguise themselves as nuns and hide out in a convent. Although to be fair Nuns on the Run predates Sister Act by two years, so they definitely aren't guilty of deliberately copying that movie at least. Despite many moments of humor to be found here it falls far short of the level of comic brilliance on display in both those other comedies.

Robbie Coltrane and Eric Idle give it the old college try as Sister Inviolata of the Immaculate Conception and Sister Euphemia of the Five Wounds, respectively. The script, as Scott mentioned, pokes fun at the Catholic Church and religion in general, although never in a mean spirited way.

My favorite bit of dialogue is as follows...

Brian Hope: “Look Charlie, some con men sell life insurance. The church sells afterlife insurance. It's brilliant! Everyone thinks you might need it, and no one can prove you don't.”

Brian Hope: “Oh! Well, if the church isn't selling anything how did it get to be so rich? Just remember, wherever there's a deep human need there's money to be made.”

Charlie McManus: “You think so?”

And then there's the classy manner in which Charlie teaches Brian to make the sign of the cross, “Spectacles, testicles, wallet and watch.”

The supporting cast provides a few chuckles as well. I laughed at the nearsighted antics of Camille Coduri as Faith. She proves herself to be a fine physical comedienne. The script is clever. Instead of Faith, Hope and Charity we get Faith, Hope and Charlie.

Of all the Monty Python alumni Eric Idle has certainly tried the hardest to become a comic leading man in the movies. Although he's a bit long in the tooth to be playing the juvenile lead I admire his perseverance. He would attempt to play the leading young man again a few years later in Splitting Heirs. While it's certainly superior to that movie, Nuns on the Run never really rises above the level of mildly amusing. 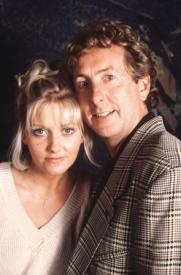 Camille Coduri and her father.

Holy crap! It all makes sense now. I always thought Rose’s Mom on Doctor Who looked familiar but could never place her. She certainly was a cute little bird at one time, too cute, in fact, for Eric Idle who is twenty two years older than Camille Coduri.

Like Scott, I have always enjoyed Monty Python and long been a fan of Eric Idle. However, he is best as part of an ensemble or in a supporting role. He lacks leading man looks, charm and presence. Add that to the fact that he looks more like Coduri’s father than paramour and we have a real case of miscasting. The role should have been played by a much younger actor. Not only would the romantic angle been less grotesque but a more baby faced actor could have been more convincing as a woman.

The women are much better cast than the men. Janet Suzman is perfect as Sister Superior, who was once a missionary in East Los Angeles. She delivers her lines with just the right amount of judgment, “You stole money because you want to get out of organized crime?” Coduri is good as a blonde so dumb she does not know she is shot. “oow.”

Both of my brothers mentioned the religious jokes and they are some of the best parts of the film. None of them are too offensive to the church. “God is very busy. He can't control all the details. He's running a franchise operation.” I smiled often but never actually laughed.

Like Patrick, I found Nuns on the Run only mildly amusing. Now, had Brian been played by someone close to Faith’s age, I may have been more invested in their love story. As is, he is likely to drop her for the first topless woman he sees on a beach in Rio.