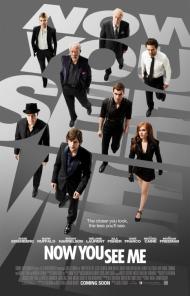 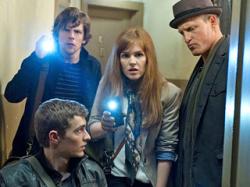 Now You See Me is a convoluted heist caper filled with smoke and mirrors. It begins with four magicians who are recruited by an unknown source. After a brief opening sequence where these four somewhat interesting characters meet up the movie jumps ahead one year in time. Now calling themselves the Four Horsemen, they have a successful act in Las Vegas. Although just what their act consists of, or how they got popular enough to fill an arena sized theater, we're not sure. We are shown only one particular performance where they claim to magically teleport an audience member to his bank vault in Paris and then magically transport three million euros back to Vegas where the money rains down on the audience. It turns out a bank was actually robbed and the FBI are called in to investigate.

At this point the focus shifts to Mark Ruffalo and Mélanie Laurent. He's FBI agent Dylan Rhodes and she's a French Interpol agent named Alma Vargas, called in to help solve the crime. These two have very little spark and they are two of the most inept investigators I've ever seen. Although this is partially explained by the “twist” ending, which is about as surprising as snow in January.

Screen legends Michael Caine and Morgan Freeman are on hand even if -like the Four Horsemen- they are both underused. Caine plays an insurance magnate who sponsors their show. He is the first of several red herrings made to look like the mysterious unknown benefactor that brought them together in the opening scene. Unfortunately his character exits the story too early. Morgan Freeman, as a former magician who now makes a living giving away trade secrets, takes over as the next overly-obvious suspect.

No offense to Mark Ruffalo but Dylan Rhodes is a bore. He's the least intriguing character in the movie yet he has the most scenes. Along with Mélanie Laurent who isn't given much personality beyond being a pretty blond with a sexy French accent. I wanted more of the Four Horsemen interacting with Caine and Freeman. Michael Caine is particularly wasted. He has one decent scene on a plane where he is tricked into giving away personal information to the Four Horsemen but as I said before he is soon gone from the movie. Morgan Freeman has more to do and he plays a big role in the plot twist. His comeuppance scene is his best moment.

Now You See Me has entertainment value if you check all logic at the door. If you think about it for more than a second you'll see that the plot has more holes than Swiss cheese. As Jesse Eisenberg says about magical sleight of hand tricks, “The closer you look, the less you see.” That also fits this movie. If you look too close or think too much about it whatever entertainment value it has dissipates in the air like smoke. And that's not magic, just bad writing. 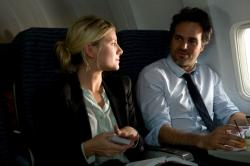 Melanie Laurent and Mark Ruffalo in Now You See Me.

Some people watch magic tricks and are simply entertained by them. Others watch the same tricks and want to know how they are done. This movie is best suited for those in the first group. As Patrick wrote, spending any amount of thought on it will only reveal how silly it is and how little of it makes sense.

The previews made Now You See Me appear to be mildly intriguing. They also made it seem as if Jesse Eisenberg, Woody Harrelson, Isla fisher and Dave Franco, the four magicians were the stars of the film. The first fifteen minutes or so support those ideas and I was hooked for that short time. We are introduced to each of them individually and they are all lead to a mysterious apartment in New York City. After that however, things take a sharp turn for the worse. The rest of the plot hinges on the audience not knowing what the four magicians are up to and subsequently the film can no longer follow them with much detail otherwise we'd learn what they are planning. Instead of the magicians being the stars, we are then given a rotating cast with Mark Ruffalo, Morgan Freeman and Michael Caine all taking their turn in the spotlight with varying results.

As Patrick wrote, the plot is often silly and filled with holes. We are shown how the magicians perform each of the tricks, but the explanations are often ridiculous, dependent upon coincidences and knowing how people will behave beforehand. The motivation for committing all these tricks, once it is revealed by the film's end, is just plain stupid and we are never truly shown the payoff, which is supposed to be so great that it's worth more than a billion dollars. And the way we learn the truth behind most of the tricks is equally dumb. Morgan Freeman's character, who makes his living debunking magic tricks, is able to tell the audience exactly how each trick was performed and in great detail. He doesn't even offer multiple solutions to each trick, he just "knows" exactly how each one was performed.

How dumb are some of the plot elements? How about being able to steal $140 million simply by knowing the name of someone's first pet as if they just kept all that money in a savings account where all you need to know is a simple password to get at it with no other safeguards.

If somehow those magicians had been given the power of real magic in that dingy apartment in New York, the movie would have been the better for it. Anything can be explained away with real magic, but when you're dealing with rules and logic, then you need to stick with those rules and follow through on the logic. This script wants to have it both ways. It wants to say that it was all set in the real world, but then it wants to make anything possible with only the flimsiest of reasoning.

A real magician makes a bargain with his audience. Both he and those watching know that he's only doing tricks and not real magic, but the entertainment comes from not being able to see how the trick was done. This movie wants to make the same bargain with its audience. Its tricks however, are tired and unentertaining with maybe just enough magic to entertain a children's birthday party. Any audience more sophisticated than that will surely be able to see the mirror in the box.

Dave Franco makes like Gambit in Now You See Me

I agree with Scott. Had the four horsemen been somehow granted actual magical powers by their mysterious benefactor, the story would have made more sense. I point to the scene where Dave Franco fights with Ruffalo and another man in the apartment. He then races down stairs where he easily subdues two other agents, steals their car, drives away with Ruffalo and Laurent in pursuit. They give chase through crowded New York streets. The scene ends with a wild crash on a traffic filled bridge where no innocent bystanders get hurt.

Later we find out that the entire sequence was staged. I know that this is only a movie and we are supposed to suspend our disbelief, but there is no way to plan such a thing without the cooperation of everyone involved, including every single person driving a vehicle that he passed that day. As these were not closed roads, there would be no possible way to do that.

Again agreeing with Scott, if real magic came into play, it would excuse all the farfetched plot devices as well as create a goal to motivate the four horsemen. They seem very excited to get something at the end of the film but it is never explained what exactly it is. It must be amazing as they are willing to break laws and endanger many lives to get it. If only the writers were able to think of something.

Patrick is right about the bad writing. The writers think they are being clever by telling the audience to pay attention as they are going to try to trick us. It uses the expression, “misdirection” a couple of times and low and behold, that is how the story plays out. Look over here at all of these red herrings, while the real action is going on over there. This is basic mystery writing, only most authors are not so smug about it.