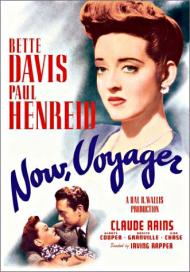 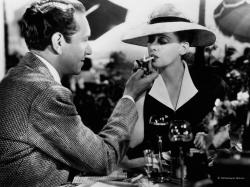 Now, Voyager is my favorite Bette Davis movie. In it she plays Charlotte Vale of the Boston Vales a very wealthy and powerful bastion of New England society. As the movie opens Charlotte is having a nervous breakdown brought on mostly by her overbearing and domineering mother (Gladys Cooper). Charlotte is the epitome of the spinster aunt. She wears dowdy dresses, sensible shoes, and unflattering eyeglasses and has thick eyebrows and an old maid hairstyle. She also exists completely under her mother's thumb.

Fate intervenes in the form of the kindly Doctor Jaquith (Claude Rains) who runs a mental health sanitarium. When the doctor interviews Charlotte we are shown - in flashback - Charlotte and her mother on a cruise. Late at night Mrs. Vale and the ship's captain are searching by flashlight for Charlotte and discover her kissing one of the crewman inside an automobile being transported on the ship. This scene was blatantly copied in the 1997 mega-hit Titanic. Dr. Jaquith quickly realizes that Charlotte's problems all stem from her mother's iron fisted control of her and convinces her to come to his sanitarium for a rest. After a few months she is ready to face the world and in a symbolic gesture of her newfound independence decides to go on a South American cruise.

The next shot of Charlotte shows her on the gangplank of the cruise ship. The camera starts at her feet and pans up to show that she has lost weight, learned how to dress and even plucked her eyebrows and is wearing make-up. This scene was copied by Barbra Streisand in The Mirror Has Two Faces. The 'new' Charlotte meets and falls in love with the handsome and understanding Jerry Durrance (Paul Henreid fresh from his role as Victor Laszlo in Casablanca). Together they share the quintessential shipboard romance. Of course Jerry is married, but unhappily so. He has two daughters and is too noble to hurt them or his wife by getting a divorce. In one incredibly romantic scene on the balcony of a hotel looking out over Rio harbor, Jerry begins a tradition of lighting two cigarettes and giving one to Charlotte. They both realize, however, that they cannot be together.

Once back in Boston, Charlotte, with the help of her mother's nurse played by Mary Wickes (who would continue making movies well into the nineteen-nineties and is probably best remembered as Sister Mary Lazarus in the Sister Act movies) is able to overcome her mother's authority and manages to become a successful part of Boston society. A chance encounter with Jerry brings back all of their feelings for each other and leads to the final act of the movie.

Charlotte's mother's death causes her to return to Doctor Jaquith's sanitarium where she meets Jerry's troubled daughter Tina. It was explained earlier in the movie that Jerry's wife didn't want Tina and that she has been an unloved child at least as far as her mother is concerned. Charlotte and Tina quickly form a bond and eventually Tina goes to Boston to live with her. Jerry shows up for the final scene. Charlotte convinces him to let her raise the girl and as Jerry lights two cigarettes and the Max Steiner theme music swells Charlotte says, "Oh Jerry, don't let's ask for the moon. We have the stars."

Charlotte Vale before the make over.

Now, Voyager is one of those films I have been meaning to get around to for years. I remember a girl in highschool telling me it was her favorite old black and white film. Patrick calls this his favorite Bette Davis movie. I however, do not share their enthusiasm for it.

I have never been a Davis fan, nor do I enjoy those old dramas. Now, Voyager is melodrama on an exaggerated level. The bossy mother and the scandalous affair with a married man are pure soap opera, with plenty of Bette Davis eyes decorating most scenes. Charlotte and Tina both suffer from the same affliction. They both feel unloved and insecure. Both are so pathetic that they each endear themselves to strangers in desperate attempts at finding happiness.

I cared for neither of them, nor did I pity them. Charlotte needed to just walk out her door to escape her bitchy mother, while Tina is just an excuse to get Charlotte and Jerry back together. The one scene I liked is when Charlotte comes back from her cruise. Her mother immediately starts barking orders and instructions. At first it looks as if Charlotte will fall back under her thumb but then stands up to her. It is the real climax to the movie, even though the film is only two thirds over at that point.

Based on the novel by Olive Higgins Prouty, who also wrote Stella Dallas, Now, Voyager is a gloomy, depressive look at how lost some people can get, even though their lives seem safe and comfortable. Both stories deals with class, single mothers and happiness found through sacrifice. These are definitely stories for suckers of dramatic prose, “I didn't want to be born. You didn't want me to be born either. It was a calamity on both sides.”

I could not wait for this sap to stop dripping. The best thing about this movie is that I can now cross it off my must see list. 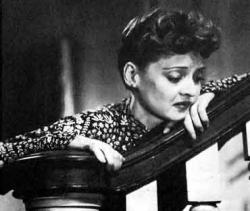 This movie demonstrates everything I hate about old movies.  It is solid melodrama from start to finish with over-the-top acting, swelling music and a plot straight out of a soap opera.  Everything about it is overdone and ridiculously campy.  The only enjoyment I got out of it was by mocking it.

As you say Eric, Charlotte isn't a sympathetic character.  I mean, we get it, her mom's a bitch, but no one is forcing her to stay there.  And when she does finally stand up to her mother it's so easy, you have to wonder just how her mother kept her under her thumb for so long.  Oh, and the "ugly" Bette Davis, is so over done with the heavy brow and glasses that she looks like a neanderthal.  And what miracle was performed on her at the asylum that she no longer needs to wear glasses?  That's some therapy that can improve your eyesight.

Charlotte is downright likable though compared to Paul Henreid's character of Jerry.  He's married to an unlikable bitch apparently, but he's too "noble" to leave her.  He loves his daughter, but he's happy to have her sent to a sanitarium when it's clear that all she needs is some love and attention.  Clearly he needs to man up, but this is a chick flick and so it's up to the female character to be the strong one.  He's such a wuss though that I fail to see what Charlotte sees in him.

The melodramatic dialogue that you found romantic Patrick, made me either groan and roll my eyes or laugh out loud.  I didn't find anything romantic about any part of this movie.

This is actually the second time I've watched this movie, although blissfully I'd blocked much of it from my memory so most of it seemed new to me.  It will definitely be the last time I ever watch it.