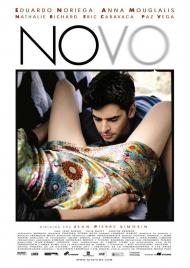 In this French dramedy, Eduardo Noriega plays a child like man, Graham, who works in the copy room of a business.  He has a very short term memory and suffers from recurring memory loss. He forgets things minutes after they happen.  Instructions must be written on the wall where he works or he will never remember what you needed copied.  He carries a notebook with instructions attached to his wrist so he knows what he is supposed to do on a daily basis.

His female boss takes advantage of it by seducing him, knowing he will never remember they had sex.  Since Graham looks like Eduardo Noriega, nearly every woman he meets wants to bed him.  He is assigned to give a new girl, Irene, a tour of the building.  She thinks something is up when he takes her to see the roof twice.  She falls for him and they are soon having sex.

Graham's real name is Pablo.  He is under a doctors care, who for some reason wants him to live like he never had a previous life, until he starts to remember.  A man who follows Graham around is actually his best friend.  Graham is really married.  A 14 year old boy who constantly shows up to stare at Graham is really his son.

Graham falls in love with Irene.  As he forgets things day to day, he writes it in his book as well as sexual details.   She gives him a handheld GPS unit to help him not get lost.  With Irene he seems a bit more normal.

The charm of Noriega as a carefree man child is the films best asset. He seems happy all the time, oblivious to any problems around him as he always forgets them anyway.   I was almost jealous of his level of contentment.  The only time he is stressed is when he visits the doctor who challenges his memory.

The movie takes a dark turn when we realize some people do not actually want Graham to get his memory back.  Irene breaks up with him when she discovers he is married.  Graham has his notebook taken from him, and ends up wandering aimlessly.  He meets some women who of course want to have sex with him, but without Irene's notes, he has no idea what to do with a vagina when looking squarely at it.  See the movie poster.

Using the GPS, his son tracks him down.  In a scene that would never appear in an American film, He finds his dad sleeping nude on a beach.  They spend the night together, and in the morning they frolic on the sand, with Noriega doing a full frontal nude scene.  I am sure it is just my American puritanism, but a clothed minor and a naked adult in the same shot is a bit odd.  It is not at all sexual, but in America flashing your dick at a kid is against the law.

Novo has some good moments, but so much of it does not make sense.  First and foremost is why was he not sent back home to live with his wife and son?  We eventually find out how his memory issues started, but it is not as interesting or dramatic as I had hoped.  The ending is a bit of an ambiguous let down as well.  It could have been so much better, but it remains a must see for Noriega fans, and by that I mean you Patrick.