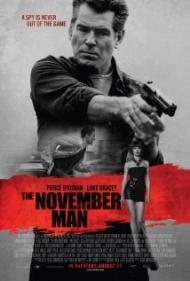 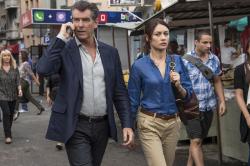 When a former James Bond actor plays a suave, globe trotting spy in another film, that's always going to be the main headline. Such is the case with November Man, which sees Pierce Brosnan suiting up and strapping on a gun in a game of international intrigue as Peter Devereaux, an ex-CIA agent who is brought out of retirement for one more mission. The plot itself is pretty standard stuff, but it is a thrill seeing Brosnan in action once again.

Brosnan's final appearance as Bond was in 2002's Die Another Day, but he wasn't officially removed from the role until 2004. Almost immediately afterwards, Brosnan's production company, Irish Dreamtime, obtained the rights to Bill Granger's book series, "The November Man", with the intention of having Brosnan play the lead role. However, it would take 7 years before production would begin.

The plot centers around Brosnan as Devereaux, living in retirement in Switzerland. When Hanley, his old CIA handler asks him to go on one last mission, to pull a female agent out of Russia, Devereaux agrees for personal reasons. During the mission, Devereaux's target is killed by another agent, who turns out to be Mason, a former protege of Devereaux's. Before the woman is killed however, she provides Devereaux with the name of a woman who holds important information regarding the future president of Russia. It seems that some people on the American side are just as anxious to keep this information quiet as the Russians are and so it becomes a race between Devereaux, Mason, and the Russians to see who will get to the woman first.

Even at 61 years of age, Brosnan still has what it takes to play the action hero. The script helps by having him play at least close to his own age and by keeping the action believable. There are no Bond sized stunts here. Devereaux also has a bit more edge than Bond. He kills indiscriminately, as everyone seems to in this movie, and without compunction. If you're in his way, you're probably going to get shot, no matter which side you're on. However, the down side of all this killing is that all these deaths have no effect on anyone, nor do they have any consequences. We learn only a little of Devereaux's past, but because he is played by Brosnan, we don't need to. This is a case of the actor's baggage filling in for the character's.

Sadly, apart from Brosnan, the film offers little. Luke Bracey as Mason, is handsome, but dull. Beyond craving Devereaux's approval, he has almost no personality or charisma. Olga Kurylenko, who has her own Bond backstory from when she appeared in Quantam of Solace, is beautiful and her character has potential, but she is reduced to the damsel in distress role, dragged around in Devereaux's wake. I was pleased that the script left out any romance between Devereaux and her character. Apart from the age difference, it would have slowed down the plot.

The only other female character in the story is Amila Terzimehic as Alexa, a Russian assassin. She seems intriguing when she's introduced, but then almost nothing is done with her character throughout the entire film. Her opening scene sets the audience up to think, "Ah-ha, now here's a deadly killer.", but then it's as if the writers didn't know what to do with her. I'd rather have seen Devereaux go toe-to-toe with her than the terminally boring Mason.

There are a few twists and turns in the story, but too many of them are predictable. This wouldn't necessarily be a bad thing. How many Bond films ever truly surprise you, for instance? But the rest of the film would have to be more entertaining to make up for the lack of surprises.

Before the film opened, Brosnan spoke of a sequel being in the works. There's enough potential in the character to warrant one, but it's going to need a much stronger script than this one if Brosnan wants to make it an ongoing series.

Pierce Brosnan and Luke Bracey in The November Man

I would welcome a sequel as more could be explored with these characters. Pierce Brosnan as Peter Devereaux and Luke Bracey as David Mason are, in a sense, playing the same character at different points in the same life. In one of the first scenes, Devereaux warns Mason about having personal relationships while undercover in the field. Later we learn that Devereaux’s advice came from experience.

Devereaux and Mason are intriguing men of action who have a unique problem. Both of these lethal men are required to kill on the job, yet both also meet women and seek the comfort of their company. Unlike James Bond who beds and bolts from one broad to another, Devereaux is more sentimental. We later learn that Devereaux had a secret personal life that ends up colliding with his professional one.

Devereaux was Mason’s mentor and trainer. He even refers to Mason, at one point, as his best friend. Although they are at odds through much of the movie, they also recognize themselves in each other. They share the film's best scene when Devereaux holds a gun to a woman’s head that Mason has just spent the night with. “Is she worth saving?” Devereaux asks. Mason hesitates before answering, “Yes.” Devereaux then does something to make Mason prove it. I was not sure how that scene was going to end.

For his part, Mason always looked up to Devereaux . It truly bothers him when he finds out that Devereaux did not give him a glowing review. Mason is caught between duty to his work and loyalty to a friend. The scene where they face each other over the hood of a vehicle with guns aimed at each other, answers many questions about what they think of each other.

Scott pointed out that most of the film’s deaths have no emotional effect on the audience or the two agents. That is pretty much the point. While most of the killings have no emotional consequences, one particular death very much bothers them both. Devereaux has learned to compartmentalize his feelings and it seems to be a lesson he tries very hard to instill in Mason.

Brosnan does some decent acting here, playing a man who has to hold in his emotions through much of the movie, although he loses it a couple of times. I agree that Brosnan's past as Bond adds to his performance, or at least our acceptance of him in the role. He is very much playing a variation of a retired 007. Although his wardrobe, posture and drink are designed to hide his bulging belly, it is clear that Brosnan has put on some weight. It actually adds to his performance. Devereaux is retired after all, spending much of his time in a bar.

Whereas Scott did not care for Luke Bracey as Mason, I found him adequate. He is good in the scene with Brosnan and his one night stand. The problem is that this movie requires little of him beyond aiming a gun. We get tiny glimpses of a personality behind the façade. Mason is lonely. Perhaps he heeded Devereaux’s warning from early on as he has kept to himself. Can we blame him? The people around him seem to drop like flies. Even when he manages a hook up, it is nothing more than an act as he clearly cannot tell her of his occupation. This makes his relationship with Devereaux all the more valuable.

As far as Olga Kurylenko goes, she looks good, which, as Scott noted, is all that is required of her damsel in distress role. Her character ends up being an important piece of the story but she still comes in third to the two agents. The plot never focuses on any romance between her and Brosnan, but it does leave it open for possibilities.

The November Man has more than enough entertainment value to warrant a sequel and I for one hope it gets made soon. The relationship between these men of different generations is worth further exploration. Their mutual respect is the heart of the film. Mason is still active and he could easily find himself in a political and personal situation that requires Devereaux’s advice and help.

Pierce Brosnan in The November Man.

Like Eric, I enjoyed the cat and mouse, mentor/protégé relationship between Devereaux and Mason. It's also much like a father and son dynamic. That is if the father's role is to instruct his son in becoming a coldblooded and efficient killing machine. As Devereaux advises him in Eric's favorite scene (while holding a gun to the head of Mason's one night stand), “You can be a human, or a killer of humans, but not both.” Sure some of the plot is predictable but for the most part I enjoyed this spy thriller. The ending is particularly exciting.

Olga Kurylenko (last seen in Oblivion – opposite Tom Cruise) may be reduced to playing the damsel in distress but she does at least get one good action scene near the end of the movie. She faces off against the female Russian assassin and acquits herself nicely. It is one of the best moments in the movie.

I think it was intentional that the many deaths carry little emotional weight. These are trained killers after all. They live in a world where human life is cheap and caring for another person is a professional liability. Anyone they love immediately becomes a target. The November Man perfectly demonstrates this fact.

Another interesting thing about this movie is the fact that the source novel, There Are No Spies, was first published way back in 1987. The script was updated to include modern technology since cell phones and the internet were both still in their infancy back then. There Are No Spies is actually the seventh of twelve novels in Bill Granger's The November Man series, so there is plenty of room for not only sequels, but prequels as well. Although Brosnan is a bit long in the tooth to play Peter Devereaux as a younger man.

His age works perfectly here however. Like Liam Neeson (who is one year older than Brosnan), he still makes a believable action star. His weathered face remains handsome and his physique is still quite slender. He may have thickened a little around the middle but for a man north of sixty he's in remarkable shape.

I'm on the fence in regards to Luke Bracey. I wasn't impressed with his performance but I didn't find it to be that bad either. I'm willing to put most of the blame on the script since he is definitely in the more thankless supporting role to Brosnan, who is the clear star of the piece. The only other movie I've seen Bracey in was the abominable G.I. Joe: Retaliation. Compared to that movie this one is a masterpiece.