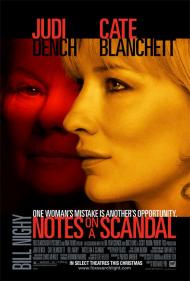 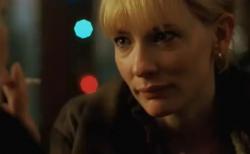 Cate Blanchett in Notes on a Scandal.

Judi Dench is not only a very talented actress, but also a very brave and versatile one. She's probably best known in the US for playing M in the new Bond movies or, for those who watch PBS, for her role on the long running British Sitcom, As Time Goes By. Both of those parts are as far as you can possibly imagine from her role as Barbara, the repressed lesbian teacher teetering on (if not actually plummeting into) the brink of insanity, in Notes on a Scandal.

Sheba Hart (Blanchett) is a new teacher at a lower class school in London. She seems in over her head when it comes to controlling her students, but Barbara (Dench) lends her hand and the two strike up an unlikely friendship. Sheba is younger, well-off, liberal and married while Barbara is nearing retirement, seems stuck in an age far removed from today and decidedly spinsterish.

Barbara soon becomes obsessed with Sheba, scribbling into her notebooks of the deep and meaningful relationship that they've formed. Sheba, on the other hand, is more interested in the advances of one of her male students, with whom she engages in an illicit affair. When Barbara catches the two of them together, she is at first shocked by this betrayal, but quickly realizes that she can use this situation to her own ends and bring Sheba under her control.

Although the plot might seem ripped out a tabloid's headline, what really makes this movie tick are the performances of its two leads. Dench is masterful as Barbara as she peels away the layers of her madness showing little by little just how mad she truly is. The truly astounding thing about this performance is that despite her derangement, she generates true sympathy for her character. She is an extremely lonely person who obviously has been repressing herself for decades, with the end result that she is dangerously off-balance.

Conversely, Sheba is obviously someone who's rarely said no to herself and leads a rather bohemian lifestyle, and yet she too is looking for something more in her life. In the final confrontation scene, Blanchett matches Dench acting for acting. If there is a weakness to the character of Sheba it is that at times she seems too oblivious of what is going on around her for someone of her intelligence, but this is a problem of the writing and not the acting.

As if two such powerhouse actresses aren't enough, Bill Nighy gives an award worthy performance in the small role of Sheba's much older, and cuckolded husband. He puts his mark on the part in several small, crucial scenes.

With Helen Mirren for The Queen, Kate Winslett for Little Children and now Judi Dench for Notes on a Scandal, this could be the year of British women at the Academy Awards. 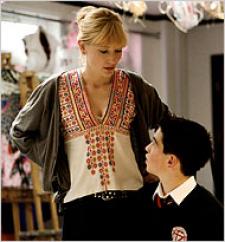 Mrs Robinson never had it so easy.

The two female leads are played expertly by Dench and Blanchet. The problem I had was in the writing. Barbara is a lonely old dyke and her motives are clear. She needs desperately to have some one in her life she can love. Sheba's motives are less than clear. In one scene she mentions to Barbara that her life is not how she dreamed it. Nowhere does it indicate that she is so lonely as to have sex with a minor.

The affair was the weakest aspect of the plot. When Sheba describes how it started to Barbara, she claims that it was the 15 year old, Steven, who initiated and pursued it until it happened. At first, I thought that the plot would later explain that Sheba's version of the relationship was only as she saw it, and not how it actually was, but nothing in the movie ever contradicts her description of it. According to this movie, a 15 year old boy knew exactly what to do and say to seduce a middle aged, married mother.

Steven seduces Sheba in the manner of someone who has had plenty of sexual experiences. He knows what lies to tell her to get her sympathy. Steven talks to Sheba in the way that an older man would talk to a young insecure girl, "You're beautiful, Miss. Ya don't know how beautiful ya are!" Had his mother been a prostitute, or his dad a randy single father who brought women home often, I may have believed his sexual maturity. The movie gives very little background on him. All that we are shown is that he has a mother and father, and lives in a nice home. As presented, I did not buy his character. Once the affair is made public, he disappears from the movie.

The novel this movie is based on was written by a woman, so I guess that may explain her view of a 15 year old boy. I can understand that if a woman listened to teenage boys talk, she would get the impression that they are all sexually aware. They often talk about sex in brave, obnoxious terms. Sure, people sexually mature at different rates, but the truth is that even men who had sex at a young age will tell you that they were awkward and naive at that age. Perhaps the author wanted to go easy on Sheba by having Steven be the aggressor, but it never rang true for me, nor did it help create any sympathy for Sheba. 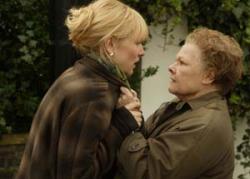 Cate Blanchett and Judi Dench face off in Notes on a Scandal.

Eric, I don’t think the author was saying that all 15-year-old boys are as sexually advanced as Steven, but some of them are. When I was in the army I knew a guy who fathered a child when he was 13. I’m not suggesting this is a good thing but it happens. As you pointed out everyone matures at their own pace and I completely bought the illicit sexual tryst between Sheba and the boy. I agree that the majority of teenage males lack Steven's confident swagger but there are exceptions to every rule. It helps that Andrew Simpson gives a very self assured performance. Steven’s hormones are raging and Sheba provides a convenient outlet.

But this is first and foremost Barbara’s story and Judi Dench gives arguably the best performance in her long and storied career. She is a desperately lonely person who longs for companionship, physical contact and sex. She spends her days judging others whom she deems inferior to herself. While she is at first shocked to discover the affair between Sheba and Steven she is motivated more by jealousy than any moral indignation.

As a society we write off and desexualize older spinster types like Barbara. Notes on a Scandal tells us there might be more going on inside them than meets the eye or that we might suspect. Barbara has an inner fantasy life she feeds off and nurtures as often as possible. She is a truly devious character but, as Scott wrote, Dench is so good that she demands our pity along with our repulsion.

At first Sheba seems to have her life totally together. Later her sexual frustration is made clear. Her husband is an older man and obviously isn’t satisfying her physical or emotional needs. She becomes seduced by the attentions and highly charged sex-drive of the boy. Like Dench Blanchett evokes sympathy for Sheba despite her morally corrupt actions, of which she is all too self-aware.

Notes on a Scandal runs a concise 90 minutes. It features sublime acting and a riveting story that will hold your attention from start to finish. A great movie.