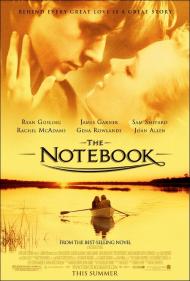 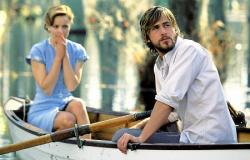 The novel, The Notebook, by Nicholas Sparks, takes the awful reality of Alzheimer's and puts a romantic spin on it. An old man spends the day reading a notebook to an Alzheimer stricken old woman. The notebook contains a love story. By the end of the day, the old woman has learned to like the old man. The end of the novel reveals that they are, in fact, married and the love story is their story. Thus, Alzheimer's has taken this wife away from her loving husband, yet through the reading of the notebook, they get to fall in love every day.

The movie takes a few liberties but sticks close enough to the book to not disappoint Spark's fans. The story in the notebook is about a summer just before the start of World War II. A rich girl, Allie, comes to a small country town and falls in love with a working class boy, Noah. In true Hollywood stereotype, Allie's rich parents are snobs and thus force a breakup. Allie then goes on to college, while Noah enlists.

After the war, Noah returns to his hometown and restores an old abandoned mansion that he and Allie were once intimate in. Allie has, meanwhile, gotten herself engaged to a wealthy southerner that her parents approve of. After accidentally coming across a photo, in the newspaper, of Noah beside his refurbished mansion, Allie decides to look up her old flame.

The movie then sets you up to guess who Allie ends up with. Of course, it is obvious, but then all romantic movies are.

McAdams and Gosling are quite comfortable in their roles. Both play their roles in tender romantic fashion. Neither stands out or blows you away. Together, they work like a hot cup of tea and a sugar cookie. With out the other on screen, the one just seems bland or dry, but together they are warm and sweet.

Marsden has matinee idol looks. In 1940s clothes, he looks like Robert Taylor. Marsden looks the part but has not a whole lot to do, other than smile and act charming.

Veteran's Rowlands and Garner generate the real emotional center of this movie. Garner narrates the story in between flashbacks. He does an Oscar worthy scene when Rowlands has a breakdown. Garner's face and expression show that of a man who's heart is mortally wounded. The final scene of this movie generated tears from fellow audience members. I won't spoil it for you, but it is amazingly bittersweet.

The Notebook is incredibly sentimental, but then this is a love story about making the romantic decision, not the logical one. Or as Noah put it to Allie, "It's not about keeping your promises, it's about following your heart." 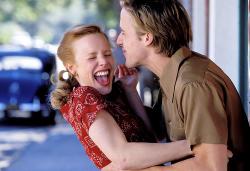 Unlike Eric seems to, I found The Notebook to be too sentimental at times, especially its ending. In fact, the movie seems to have two endings, out of which I preferred the first. At the end of the day, Noah (Garner), having just gone through the trauma of having his wife remember him and then forget him again within the space of few minutes, goes to sleep knowing that it is those few minutes of lucidity that make his life worth going on with. The movie then fades to black, but then comes back for what I felt was an overly sappy ending.

I agree with Eric that Garner and Rowland are the emotional center of the movie, but I enjoyed Rachel McAdams' performance more than he did. She looks and acts as though she could have stepped out of the pages of a Fitzgerald short story. Gosling however isn't given enough to do and spends much of the film simply moping across the screen.

I should hasten to add -- before anyone accuses me of being a cold fish -- that this is a sad, bittersweet movie that did touch me. Having recently passed my thirty-sixth birthday, the road to old age doesn't seem quite as long as it used to and having someone to travel with you down that road eases the burden immensely.

All in all a decent love story, but one suited for those who don't mind a high level of sentimentality. 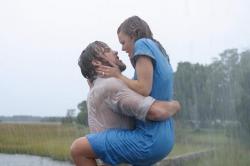 Ryan Gosling and Rachel McAdams in the most famous scene from The Notebook.

The Notebook is impossibly romantic. It brings to life that rare perfect summer romance that becomes a lifelong love affair. Everything about this movie is designed to evoke an emotional reaction and it works beautifully so long as the viewer doesn’t watch with a cynical or jaded eye, in which case it will seem extremely sappy.

Now I have finally seen the actual scene that gets shown with fake dialogue added before every movie in theaters these days to remind the audience to silence their cell phones. It is the now iconic moment when Noah and Allie finally reunite after 7 years and get caught in the rain… Young Allie: “Why didn't you write me? Why? It wasn't over for me. I waited for you for seven years. But now it's too late.” Young Noah: “I wrote you 365 letters. I wrote you everyday for a year.” Young Allie: “You wrote me?” Young Noah: “Yes... it wasn't over. It still isn't over.” …followed by Allie jumping into Noah’s arms for a passionate kiss as the rain continues to pour down on them (see photo).

As good as both McAdams (whom I’ve never been a fan of until now) and Gosling are in their roles as the young Allie and Noah, I agree that Rowlands and Garner provide the real emotional anchor to the story. Garner’s narration is flawless. I love how he introduces himself… “I am nothing special; just a common man with common thoughts, and I've led a common life. There are no monuments dedicated to me and my name will soon be forgotten. But in one respect I have succeeded as gloriously as anyone who's ever lived: I've loved another with all my heart and soul; and to me, this has always been enough.”

OK, so Scott is right. This movie is for those who don’t mind a heavy dose of blatant sentiment in their love stories. I’m a sucker for them when they are written as well as this Notebook. 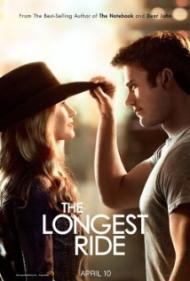