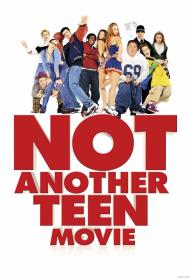 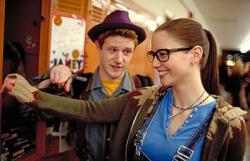 I'm not sure why, but from the minute I first saw the previews for this movie, I really wanted to see it. I think it's simply a case of clever marketing on top of a good premise.

The teen movie genre, so complete with it's stereo-typical characters and stock situations, is certainly ripe for satire. The posters and even the film's website played up the different characters and these situations. We are presented with the Popular Jock, the Cocky Blonde Guy, the Pretty Ugly Girl, the Cruelest Girl, the Bitchy Cheerleader, the Token Black Guy, the Obsessed Best Friend, the Stupid Fat Guy, the Desperate Virgins, and the Foreign Exchange Student. Add these characters to a plot that is ripped from the latest teen movie; the popular jock makes a bet that he can turn the pretty ugly girl into the prom queen and you have a great set-up for a satire.

There are a few scenes which actually spoof the genre without relying on shock. When it comes time to turn the pretty ugly girl into a beauty, the girl giving her the makeover studies her for a long moment, and then says, "I know!", and then removes the girl's glasses and takes her hair out of the ponytail and viola, she's beautiful! And at the Prom, after everyone on the dance floor suddenly breaks into perfect synchronized dancing, one of the guys on the sidelines quips, "Who'd have guessed that every student at this school was secretly a professional dancer!"

Other scenes in the movie are tributes to the teen movies of the eighties without satirizing at all. There is a scene in the library which is based on The Breakfast Club, only instead of satirizing it, it is simply a recreation of the exact same scene, even down to the set and features the same actor playing the principal as the original. There's no real point to this scene, except the initial chuckle of recognition.

Other humorous moments which have little to do with satire include a big production number before the Prom. I don't remember too many of those in the teen movies of the 80's or the 90's. The makers of this movie also rely heavily on nudity to provoke cheap laughs. The female Foreign Exchange student spends the entire movie naked and an opportunity to show tits is never passed up. This seems particularly out of place in a film supposedly satirizing some of the most innocent movies ever made. Any sex in a John Hughes movie, was only talked about, and I don't remember nudity in any of them.

So while in the long run, this movie is funny, it misses a great opportunity to truly spoof the genre in anything approaching an intelligent or witty way. Instead it relies on way too much bathroom humor and crude, shock, jokes. 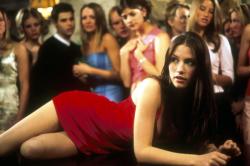 Not Another Teen Movie is a spoof of almost every teen movie ever made. Had it simply stayed with that format it could have been a great flick. It almost seemed like the makers of this film were to busy copying a genre instead of making a point about it through jokes.

All the teen movie stereotypes are here but not enough comments are made on the absurdity of them. The popular jocks are popular jocks. The attractive sluts are attractive sluts. One scene to the exception is the one Scott mentioned where the "ugly" girl becomes "pretty" by just removing her glasses and taking her hair out of a pony tail.

As Scott wrote this movie reenacts a scene from the Breakfast Club down to the lines. In another scene they redo the whipped cream bikini from Varsity Blues. Only this time it's a boy wearing it. Not funny! How about if the whipped cream dripped everywhere? Or if he had to chase her out of the house wearing only dairy products while some nuns were walking by. But just recreating a scene is not humor. At least at the end of the movie Molly Ringwald shows up to call the actors on all the lines they keep stealing from other movies.

My favorite character was the dad played by Randy Quaid. He was a genuine exaggerated spoof of all the uncaring distant parents who inhabit most teen movies. "You'll have to find a ride home from school honey." "Because you'll be out looking for a job?" "No, I just plan on getting drunk." "Well that's good, we don't want you out driving drunk." "Oh I'll be out driving drunk, I'll just be to shit faced to remember to pick you up."

The worst part of this movie is the scene where the dad offers his son sex with the boy's own mother so as to console him after being broken up with. I don't ever want to meet anyone who found that joke funny. What the hell was the screen writer thinking? Just because something is gross does not mean it's necessarily funny.

This is a movie worth a couple of laughs but it could have been so much better. Slam your subject, don't compliment it. Mel Brooks needs to hold a class on satire. 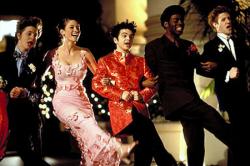 You need an unusually high tolerance for bathroom humor and an extensive knowledge of teen movies from the 80s and 90s to find Not Another Teen Movie enjoyable. According to Wikipedia it parodies no fewer than 26 movies (only about half of which deserve the honor), and all in just under 90 minutes. The jokes fly by at an impressive rate even though more of them miss the mark than hit it.

The over reliance on shock humor has caused the movie to seem dated already. Those types of jokes are good for one viewing but don't age well. Some of the humor was already old in 2001. The token black guy and the pretty-ugly girl are both worth a few chuckles even if they were tired old cliches long before this movie came out.

The cast isn't bad. Jaime Pressly is good as the cheerleader who, when told by a rival that she better bring it, replies, “Oh, it's already been brought-en”. The rest of the cast is decent, still the presence of someone with the comedic chops of Anna Faris is sorely missed.

There were only two times where I laughed out loud. The first was the wannabe cheerleader with Tourette's, “Give me an 'H'. Give me a 'U'. Give me a - giant pussy-licking, ass-fucker cock shit.” And the other was the two Caucasian hip hop boys who make fun of the white guy who wants to be Asian. White Guy: “Damn Shorty, dawg is pretendin to be all Asian and shit.” Other White Guy: “That Cracka is white! Can't he see dat yo?”

This was a funny idea that needed a much better execution. Like too many of the movies it pokes fun at, Not Another Teen Movie is easily forgotten.