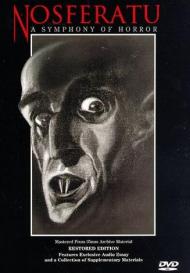 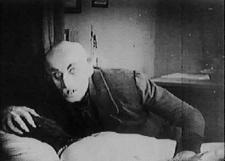 Max Schreck as Count Orlock is the best thing this movie has going for it.

Nosferatu is the first filmed adaptation of Bram Stoker's Dracula, although since they didn't have the rights to use the novel or its characters, they simply changed the title and the names. Despite these cosmetic changes and a few points in the story that differs from the book, this is still, quite obviously, the story of Dracula. In fact, after the movie was released, Bram Stoker's estate sued the maker's of Nosferatu for copyright infringement and won. Despite this, many of today's copies of the film have gone ahead and changed the names on the cutscene cards to match the names in Dracula.

The plot, for those unfamiliar, tells of a young real estate agent (Harker in the novel, Hutter here) who is sent into the Carpathian Mountains in Transylvania to meet with a mysterious old Count (Orlock in this version) who wishes to buy property in a city. When Hutter meets Orlock he discovers a hideous, rodent like old man with a blood fixation who gives him the creeps. He also wakes up after his first night in the Count's castle, with two strange and bloody marks on his neck. The Count leaves quickly after signing the papers Hutter has brought him and travels by boat to the city, leaving Hutter trapped in his castle. Upon arriving in the city, Orlock goes on a killing spree, causing what the townsfolk believe to be a sudden attack of the plague. Eventually it is up to Ellen (Nina in the novel) to do what she thinks must be done to destroy the vampiric menace.

Undoubtedly the best thing this movie has going for it is Max Schreck as Orlock. He's no suave or seductive vampire. His ears are long and pointed, as is his nose and fingernails. His bald head and bushy eyebrows add to his rodent-like features and he's creepy looking as hell. And his stiff gait and odd movements really add to that creepiness. The director also makes good and interesting use of the shadows this strange creature casts, something that Francis Ford Coppola would imitate and expand upon in his version of Dracula.

With Schreck being the best part of this movie, the worst part of it is that he's not in it nearly enough. He's only on-screen about 10 or 15 minutes out of the whole movie. Of course, this isn't just this movie's fault. If you've read Dracula, you also know that this is true of the novel as well. There's just far too much time spent on Ellen and Hutter, both of whom overact even by the standards of the 1920s.

Production values on the film are quite good for the period. Several special effects are done well, including extended use of stop motion photography to imitate Orlock's ability to move things with his mind. Perhaps the most famous scene from the movie is the moment when Orlock rises from his coffin on board the ship when he raises himself from being prone to standing without ever bending his body.

As one of the first horror films and the movie that set a lot of the standard things we think of in vampire movies, you have to give Nosferatu credit. Despite all that though, the movie as a whole is lacking. It contains some iconic moments, but too much of it, i.e. any scene without Orlock, is less than stellar. 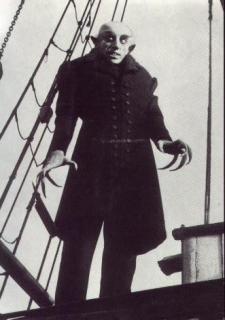 Much scarier than Bela Lugosi.

Scott, I disagree with you. The actors playing Hutter and Ellen are better than you give them credit for. The scene where Hutter realizes just what Orlok is he doesn’t overreact at all. With a simple look he expresses horror and revulsion. And Ellen seems really hypnotized. She removes all expression from her face and eyes.

The direction here is masterful. Murnau conjures up an atmosphere of evil and decay that remains consistent throughout the movie. Notice the supernaturally fast manner in which Orlok drives his horse and carriage. And this version is ten times scarier than the talking Bela Lugosi movie. The scenes on the ship in particular remain scary nearly 90 years after they were filmed.

I do agree that Max Schreck as Orlok steals every scene he is in and he’s the biggest reason the movie is remembered today. And though he may not have much actual screen time his presence is felt in every scene. Shot for shot I would rank this as one of the best silent movies ever made and it’s still a decent horror flick with plenty of entertainment value. 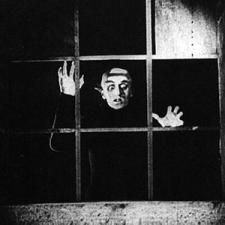 At just over an hour in length, it never bothered me that the Nosferatu was only in 20 minutes. As Patrick wrote, his presence is firmly felt the entire film. Like Jaws, the anticipation of him showing up is half the fun.

Schreck has several scary scenes. He is so damn creepy, that all he has to do is look at you and it sends tingles down your spine. The scene where Hutter sees him outside his bedroom door, and when Orlock looks out his window towards Ellen are both scary, without him really doing anything.

Made before their was set lighting, a couple of scenes are flawed. When Hutter first arrives at the castle it is clearly in the middle of the day, as the shadows are directly below. Orlock however, tells Hutter it is almost midnight.

I also agree with Patrick that Nosferatu is a scarier film than the 1931 version. This is solely due to Schreck. His vampire is more beast than human. The scene where the professor shows the Venus Flytrap, demonstrates the film creators inspiration for Orlocks teeth and long fingernails. 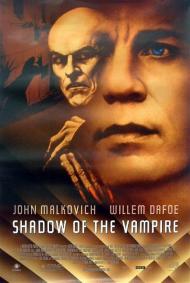