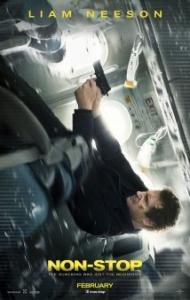 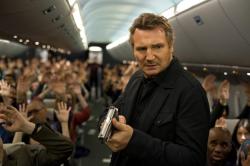 A film is not only supposed to garner an emotional reaction from the audience but the right emotional reaction. We should feel warm and gooey during a love story and experience a sense of fear watching a horror film. We should enjoy levity in a comedy and a rush of adrenaline during an action film. Non-Stop is an intended action thriller but the only feeling it left me with was disgust.

Liam Neeson plays Bill, an air marshal aboard an Atlantic flight. Shortly after take off, he receives a text from someone aboard the plane, telling him he must have the airline wire 150 million dollars into an account or every twenty minutes someone on the plane will die. With such an isolated location and limited potential murderers, this film could have aspired for a Ten Little Indians knock off but, unfortunately, this movie was not written by Agatha Christie.

The writers, John W. Richardson and Christopher Roach, are known for such intellectual television work as “Wipeout,” “Big Brother” and “WWE”. Their script for this film could have been written by a couple of middle school students. I spotted the terrorist the moment he/she appeared on screen. This terrorist is written so as to be so clever that Bill’s bosses, as well as all of the other passengers, begin to think that Bill is the terrorist.

The ridiculousness by which Bill handles this is laughable. As soon as he knows this threat is real he should have collected all of the passengers and crew into coach, told them what he knows and wait for the next twenty minutes to pass. Either someone would have died, revealing the murderer, or it would have passed without incident.

This film is about as juvenile a script as they come. Bill is a divorced alcoholic. For good luck, he carries a ribbon given to him by his daughter when she was young. Wouldn’t you just know it; there is a little girl on board traveling to London to see her father. You don’t think those two things will come into play do you?

As bad as this plot is scripted, the worst offense it commits is who the terrorist turns out to be. Is it a Muslim extremist? Of course not. Is it a cold war hold-over? No. Is it a drug lord? Not even close. It is a disgruntled American war veteran. Yes, Hollywood has made a movie where the bad guy is a former American soldier and John Wayne is rolling over in his grave.

It is not impossible to make a decent film in which a war veteran is a criminal, but when the only veteran on screen is the baddie, it leaves a really bad taste in my mouth. American soldiers have a job that risks their lives. Their professional experiences lead them to have the highest rate of suicide of any occupation. For all their dedication and risk, Universal Pictures thanks the American soldier for their service with this offensively ignorant film. All involved should feel ashamed of themselves. Of course, it seems the only time Hollywood feels shame is when a movie does not turn a profit. My fingers are crossed. 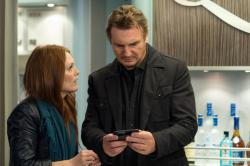 Eric, as soon as the villain's backstory was revealed, I knew that you would hate this movie. However, it's not nearly as bad as you claim. Sure, it's implausible as hell and the drama is pure soap opera, but if you don't think about things too much there is some fun to be had here.

Liam Neeson continues his reign as king of the b-movie actioneers. At 61 he has aged remarkably well and can still believably play the action hero. He has a presence and a voice that lends credence to the most ridiculous of situations. He's playing a walking cliche as the wounded hero with a troubled past who finds redemption by saving others, but because of Neeson, we're still able to care about his character. Nicolas Cage was the former king of the b-movies, but where he always played things slightly tongue-in-cheek, Neeson plays it completely straight, even when speaking dreadful dialogue, which as Eric insinuated, appears to be written by amateurs.

I agree that there are plot holes aplenty. The killer is able to predict exactly how and when things will happen, particularly in regards to the first death on the plane. Somehow he knows exactly how two people will react and the exact timing of when they will react that way. Too many of the outcomes of his actions depend upon coincidence and chance. Also as Eric wrote, Bill doesn't go about his investigation in the smartest manner. One of my biggest unanswered questions was why didn't the co-pilot ever speak to the passengers in an attempt to calm them down and explain (even if the explanation was a lie) to them what was happening in an attempt to defuse the situation? The plot holes really begin to mount as the mystery is explained. The first half, when we don't know exactly how everything is happening or why, is definitely the better half. Act III features the most action, but is actually the least enjoyable.

The story is also helped by the cast. Julianne Moore gives good support as does Michelle Dockery of Downton Abbey fame. The film is also the answer to the trivia question, what was Lupita Nyongo's follow-up film to her Oscar winning turn in 12 Years a Slave, since she has a small part here as one of the flight attendants.

This is just one of those movies where you have to suspend your skepticism and just go with it. Sure, the resolution isn't very satisfying and you could nitpick the details to pieces, but if you can just sit back and go with the flow it provides some cheap entertainment.

Non-Stop starts strong. Like Eric wrote, the set-up is loaded with possibilities. Like those old Airport movies from the 1970s we meet the various passengers and crew as they board the ill-fated aircraft. The script even includes an homage to that movie series by naming the two flight attendants Nancy (Dockery) and Gwen (Nyong'o). In the original Airport (1970) Jacqueline Bisset's character was named Gwen and in the first sequel, Airport 1975, Karen Black's name was Nancy.

Unfortunately what starts strong quickly degenerates into a series of obvious red herrings as Bill (and by extension the audience) suspects various people at different times. This is an attempt to keep us from guessing the real villains before the big reveal scene. The script lumbers along growing more and more implausible with every new twist. I wasn't offended by the fact that the bad guys were ex-military, but I was offended by the stupidity of their reason for committing these crimes, which is patently preposterous.

The talented cast is mostly wasted. Liam Neeson dominates the movie from beginning to end. Besides Neeson, Julianne Moore fares the best but even she can't do much with her poorly written part. Michele Dockery is given precious little to do and poor Lupita Nyong'o even less. Neither one's career was helped by this dud. Corey Stall does make an impression, although his NYPD officer is a walking cliché. He's an actor with some range. I didn't even recognize him from his role as Ernest Hemingway in Woody Allen's Midnight in Paris.

Sure Liam Neeson is always compelling to watch. But his towering presence isn't enough to fill the plot holes and extremely unlikely coincidences that occur throughout the movie. And with a run time of nearly 2 hours I was more than ready for Non-Stop to end long before the plane lands.