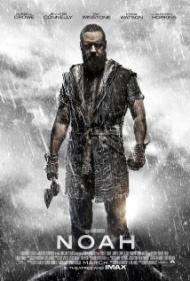 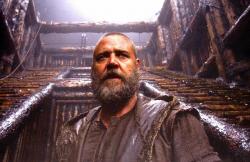 Darren Aronofsky's long awaited followup to the critically acclaimed Black Swan is an epic retelling of the Biblical story of Noah's Ark. It is awash in CGI. Every animal in the movie was digitally created, and the result is a bunch of bland creatures that add surprisingly little zest to the proceedings. Aronofsky added a few imaginative Hollywood flourishes. The most obvious being the Watchers. These are fallen angels who watch over mankind in the guise of giant stone creatures with many arms. It is the Watchers who actually construct the ark in this version.

The story is decently acted but it moves at a snail's pace. By the time Noah and family are aboard the floating vessel more than an hour of screentime has passed. And for some reason the director felt the need to insert a big battle scene in the middle of the movie. It seems out of place and serves no purpose other than being an obvious attempt to add some excitement and danger to this rather simple story.

This movie has a blatant anti-carnivore message that I don't remember from the Bible. Meat eaters are shown as representing evil while Noah and his family are portrayed as vegetarians. It should surprise no one that Aronofsky is vegan in real life. But you would think, given this angle, that the movie would focus a bit more on the vast array of wild life gathered aboard the ark. But no, other than the scene where they board the ship of their own free will, these animals play a very small role in the story. This is explained by the use of a mysterious herb that induces sleep in animals but apparently doesn't affect humans.

Once they are aboard the ark the story continues to meander, with a dramatic conflict that adds very little tension, since the outcome is never in doubt. Russell Crowe does his best Charlton Heston impression as the holier than thou prophet chosen by the Creator (the word “god” is never spoken). Jennifer Connelly has the rather thankless role of Noah's long suffering wife. Although she brings some fire to one particularly dramatic scene, I don't think women with grown sons had such perfect teeth and flawless skin like she did in those ancient, pre-plastic surgery, days. Anthony Hopkins continues his trend of playing larger than life characters in supporting roles and he hams it up as much as you would expect as Methuselah, Noah's grandfather and the longest lived person mentioned in the Bible. Emma Watson proves once and for all that she has moved beyond Hermione Granger and has arrived as a fully developed adult actress.

The director also adds a villain that wasn't in the original Old Testament fable. He's a descendant of Cain and he sneaks aboard the ark after leading the aforementioned attack on Noah right before the deluge hits. His name is Tubal-Cain and he's played by Ray Winstone. We know just how evil he is when he bites the head off a lizard thus knowingly causing the species to go extinct. He tempts Noah's middle son Ham to take sides with him against his father.

Noah is one long bore of a movie that at times manages to be both pretentious and hackneyed. It looks good at least. In that sense Aronofsky lives up to his reputation as a visionary filmmaker. But the script is cheesy when it's not being monotonous, with a blatantly simple environmental message that gets crammed down the audience's throat. I was actually looking forward to seeing what this talented director would do with this ancient tale. The result, unfortunately, is not very good. 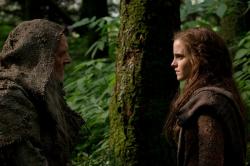 This is a much better film than Patrick would lead you to believe. Sure, the editing could have been tighter and the pace a touch faster in parts, but overall this is an entertaining film. I also wouldn't call the anti-carnivore, environmental messages blatant at all. They're there if you want to look for them perhaps, but they are not central to the story at all.

I do agree with Patrick on certain points. Jennifer Connelly and Emma Watson both deliver great performances. Connelly's part is pretty thankless, until the scene Patrick mentioned that comes late in the film where she delivers the film's most emotional moment. Emma Watson was always the weak acting link in the Harry Potter films, but I concur that she has finally arrived as a fully developed actress. Likewise, I noticed that the animals played very little part in the story, but I don't see that as a weakness. What exactly would they bring to the film? I also found it odd that the Creator is never referred to as God, since the story doesn't shy away from its Biblical roots in other ways and never calls in to question the existence of God and indeed, shows direct evidence that he exists.

Crowe delivers a strong performance as Noah, making a very believable Old Testament hero. This is a stronger, more physical Noah than is typically shown and he towers over the story. I didn't find Hopkins' performance to be particularly hammy. It's certainly more restrained than his performances in the Thor films. Noah's sons, played by Logan Lerman, Douglas Booth, and Leo McHugh Carroll, are rather bland and remain in the shadow of their father, almost without any personality at all except for a minor rebellion by Ham, the middle son.

The plot remains fairly faithful to the original bible chapters, as Patrick said, but then adds a few flourishes to fill out the story. It is the Watchers that are the film's largest addition and its most fundamental. Here are direct evidence of a divine being. They are fallen angels encased in stone. Faith is not required to believe in them. They are quite literally solid rock. And then we have Methuselah, who, in this story, is able to perform magic, providing more evidence of a divine being. He gives Noah a seed from the Garden of Eden, which causes an entire forest to grow over night, from which Noah can now build the ark. Irrefutable evidence to Noah, his family and all those who know the area of a higher power. My point of all this is that it removes the idea of faith. God is not a question of belief here, because there is evidence that he does exist before our and Noah's eyes.

Because of Methuselah's magic and the presence of stone giants, along with the battle scene Patrick mentioned, this move feels more like a fantasy adventure than a Bible story. I was reminded of the comic book adaptation of the Bible that I read as a child. Purists might complain about these additions, but without them the story would be both short and fairly dull. The original story from the Bible is very brief and provides little detail. To make a full length movie out of it you have to add something to it. It is obvious however that Paramount was leery of the addition of the Watchers by the way they are included in none of the previews to the film.

The final area where I do agree with Patrick is that I expected more from Aronofsky. He delivers a fairly standard adventure film here that might surprise those of faith by the way it treats its subject with sincerity. However, I still found the end result to be entertaining. It's just not as thought provoking as you might expect from the director of Requiem for a Dream, The Fountain, and Black Swan.

Logan Lerman as Ham in Noah

My brothers wrote that, “Aronofsky added a few imaginative Hollywood flourishes.” And that, “Purists might complain about these additions, but without them the story would be both short and fairly dull.” I disagree with both statements. Aronofsky does more than add flourishes; it is the most blatant bastardization of a famous story this side of Peter Jackson’s The Hobbit.

The Watchers are a complete fabrication. Genesis speaks of there being “giants” in the world then and now. It is fairly understood to mean men of great strength, not stone monsters. Noah and his sons built the ark, not fallen deformed angels. Tubal-Cain did not exist within the biblical story. There were no stowaways on the ark.

The biggest change from the original tale is that in the Bible all of Noah’s sons had fertile wives that boarded the ark, while here there is only one who is at first barren. This film shows Noah and his middle son, Ham, at odds as Ham wants to get laid, while Noah does not see any of the available women as worthy to come with them. It makes no sense as Noah knows they are to repopulate the world. Would not more women on board be a good idea?

Now according to Genesis, there was a major conflict between Noah and Ham but it came after they exited the ark. Noah planted a vineyard and after harvesting and making wine got drunk and passed out in his tent. The Bible tells us that, “Ham saw his father’s nakedness and told his brothers outside. Sam and Japheth took a robe, and laying it upon their shoulders, went backward and covered their father’s nakedness; as their faces were turned away, they did not see their father’s nakedness. When Noah awoke from his drunkenness and learned what his son had done to him…”

What did Ham do? The Bible is vague. Some have interpreted this as meaning Ham sodomized his father while others mean it to be that Ham had sex with his mother. The movie depicts a scene where Noah gets drunk and naked and his sons cover him but it is not a point of contention or incest of any kind. Cleary Ham did something horrendous as Noah cursed Ham’s offspring into slavery. The Bible perhaps gave another hint as it tells of Noah’s son’s descendants. Ham’s offspring founded many cities including the famously decadent Sodom and Gomorra.

There was plenty of good story to tell here without “added flourishes.” Is it any less exciting that God spoke directly to Noah in the Bible, not through drugs given to him by his grandfather or in a dream. The Bible does not mention Noah’s daughter in-laws by name and at no point does Noah ever consider murdering his granddaughters. In fact, Genesis only speaks of Noah’s grandsons.

My brothers agree that this movie is not faithful to the original source, while I will add that you could consider it even blasphemous. Noah was picked because he was “good” yet this movie makes the point that he is not perfect by far. He does not save the girl Ham likes and makes the ridiculous assumption that he must murder the babies.

One of the most notable changes is the presence of a snakeskin talisman. It is in one of the first scenes and last. It is used to bless children? Several times we are shown a snake while a narration speaks of Eden, thus the snake represents Satan in the story of Adam and Eve. At one point the snake is shown shedding his skin, obviously implying that the snakeskin in question is from the serpent in the garden. Again, there is no mention in the story of Noah of a magic snakeskin.

To me, Aronofsky is implying that no one is perfect, Noah may be a good person but he still carries some evil with him. Okay, but that entirely contradicts the point of the story of Noah’s Ark. He was chosen by God to “restart” the human race because, “Noah was a just man, blameless among the men of his day. He walked with God.” This does not exactly describe the Noah in this film.