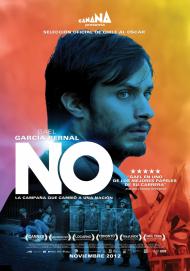 No is the 2012, Best Foreign Language nominee from Chile. It tells the story of the first democratic vote in Chile for fifteen years in 1988. It's an entertaining look at how marketing and advertising can sometimes have as large an effect on public events as a military campaign.

In 1973, General Augusto Pinochet took power in Chile in a coup d'etat, deposing the democratically-elected Socialist President Salvador Allende. Pinochet quickly suspended the country's constitution and began 15 years of military dictatorship. He eventually caved in to foreign and domestic pressure and agreed to hold an election in 1988. It wasn't a normal election and the ballot only had one option. You could vote Yes or No. A Yes vote meant that Pinochet would rule unopposed for another 8 years, while a No vote would mean that in a year's time an actual election would take place with opposing candidates. This film tells the story of the No campaign during that 1988 vote.

General Pinochet generously agreed to allow those who opposed him 15 minutes of television time late each night during the weeks leading up to the vote. Gael Garcia Bernal stars as Rene Saavedra, a hotshot advertising executive who is brought on as a consultant for the No campaign. With such limited screentime to work with, Rene uses all of his advertising skills to produce a series of commercials that are a far cry from what his employers and the opposition were expecting. Instead of focusing on all of the things that Pinochet did wrong over the years, including mass killings, oppression and the removal of any who opposed him, Rene films upbeat, snappy ads that feature Chilean movie, television and music stars.

The movie's most distinctive element is the film used to shoot it. Director Pablo Larrain chose to use low definition, 3/4” Sony U-matic magnetic tape for the entire movie. It's the low grade quality of film that was widely used by television news in Chile during the 1980s. Although it takes a little getting used to at first, it allows the film to seamlessly edit in news footage of the period. In fact, rather than hiring an actor to play Pinochet, the filmmakers were able to edit him in using that footage and essentially allowing him to play himself.

Although the main story is all about politics, it's Bernal's Rene that is at the heart of the film. He's a single father living with his son. His ex is a political activist who has been in and out of jail. It's obvious that he's still in love with her, but she doesn't reciprocate his feelings. She even dismisses his ad campaign, as many of the hardline radicals do, because it glosses over Pinochet's worst atrocities. We feel the triumphs and failures of the No campaign through him.

One of the nice things about watching foreign films is that it allows audiences to see and learn things that they might never know anything about. I only had the vaguest recollection of these events from the 1980s and would probably never have learned more about them were it not for this film. It shows that when it comes to political campaigns, America isn't alone in using style over substance to get its message across. 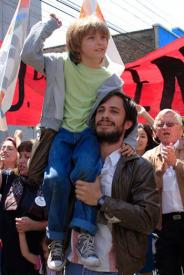 Politics has always been about style over substance, especially after the use of television. This became very clear with the first television debate between John F. Kennedy and Richard M. Nixon in 1960.  Those who heard the debate on the radio believed Nixon won. Those who saw the tan, good looking John Kennedy and the sweaty, pale Nixon on TV claimed Kennedy won.

Campaigns are, and have always been, about propaganda. For far too many of us, someone tells us what we want to hear and we respond in kind. Most politicians rely on the low information voter to get elected. They would rather you bought into their bullshit commercials than their voting record or facts.

With that said, No reflects negatively on the common voter as it shows that we need flash and pop songs to get our attention and to make a point that we will pay attention to. No shows that we elect leaders like we choose what soft drink to buy. Facts are irrelevant. All a politician or political movement needs is a good marketing campaign.

Although most of the politics going on here are foreign to me, Gael Garcia Bernal plays a very universal character. He is a man with a goal, bravely facing odds that could easily take him out. As Scott wrote, he has some personal issues as well. His two worlds collide when he takes his son to a "No" rally and the troops are sent to disperse everyone, forcing them to run for safety.

No is a very informative film about contemporary Chilean history, but it also has a universal message.

Eric, I concede your point that many citizens often cast their votes based on soundbites heard during televised campaign ads or because they believe in whatever rhetoric their party's candidate spouts, without actually bothering with things like voting records. You would think it would be a no-brainer to vote against a brutal dictator whose regime brought a 15 year reign of terror to the Chilean populace. But the complacent middle-class was content to let things go on as before without worrying too much about the 40% of the population living in abject poverty, or the fact that dissidents often went mysteriously missing.

What René Saavedra instinctively understood was that in order to get this complacent middle-class to vote NO against Pinochet he needed to use optimism rather than negativity. Of course this pissed off all of the serious radicals striving to overthrow Pinochet, as shown in the scene where a man who lost his brother interrupts a meeting and storms out after hurling epithets around the room.

You can't argue with success though, and the results of the NO campaign speak for themselves. It is a milestone in propaganda. Eric, a Chilean political science professor, writing a critical review of the film, asked his readers to contemplate if they really ought to celebrate the moment that political activism turned into marketing, rather than a discussion of principles.

The ads themselves are quite amusing and several of the jingles are catchy as hell. “No Me Gusta, NO!” was stuck in my head for several hours afterward. I liked their idea to film the entire movie like an old newscast. It not only, as Scott mentioned, allows Pinochet to play himself through actual archival footage, but it gives the movie historical context and contributes to the verisimilitude of the period detail.

I've been a fan of Gael García Bernal's ever since Y tu mamá también and he continues to impress with his work here. He is not only a strikingly handsome man with an abundance of charisma, he is also a very competent actor. He holds the movie together with his innate charm and, as Eric mentioned, he exudes an Everyman quality that is very appealing. He's sort of a Latin-American Jimmy Stewart.

I agree with my brothers. No is informative, entertaining and universal.