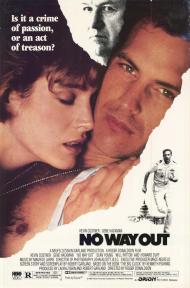 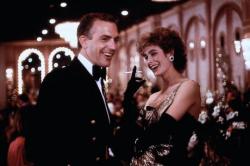 Kevin Costner and Sean Young in No Way Out.

No Way Out is a tense thriller from 1987. It's one of two movies released that year that pushed Kevin Costner onto the A-list. The other being The Untouchables. Although that other movie garnered more attention, including an Oscar win for co-star Sean Connery, this movie deserves to be remembered as well.

The plot is based on a 1946 novel entitled "The Big Clock", which had already inspired a big screen version in 1948 starring Ray Milland, Charles Laughton and Maureen O'Sullivan.  That earlier filmed version adhered closer to the book's plot, while No Way Out brings the plot into the then current day and moves the action to Washington D.C. and the Department of Defense, while still retaining somewhat of a noir feel.

This is one of those movies with many twists and turns. If you haven't seen it, I actually urge you to do so before reading anything else about it. Much of the fun is seeing what will happen next. I won't give away too many details, but it's too difficult to write about this movie without giving away some things.

Costner plays Tom Farrell, a Lt. Commander in the Navy. He meets and begins a passionate affair with Susan (Sean Young), who also happens to be the mistress of the Secretary of Defense, David Brice (Gene Hackman). When the Secretary learns that Susan is two-timing him, he kills her in a fit of anger. Brice's slimy assistant Scott Pritchard urges David to cover-up the murder rather than confess to the crime. They decide to blame Susan's other lover for the murder, whose identity they don't know. For good measure they decide to declare that this mystery lover is Ivan, a Russian spy. Pritchard assigns the task of finding Ivan to Tom Farrell, who therefore finds himself in the position of both investigating himself and trying to gather enough evidence to prove that it was Brice who is actually the murderer.

While that may seem like a lot of plot detail to give away, there is still plenty of mystery left in this movie. And, just when you think everything is resolved, the plot throws one last twist at you in the final few minutes of the story.

The cast is terrific. Sean Young is vulnerable and attractive, in a very 1980s sort of way. She and Costner share some serious heat in the back of a limousine. Hackman could play this part in his sleep, but he brings his usual screen presence to the role. Will Patton is the real villain of the piece and he plays the slick Washington insider well. This is Costner's movie though and he does a great job. His character is in way over his head and struggling to stay one step ahead of everyone else. He demonstrates plenty of charm, movie star good looks and leading man capability.

It's more tense than action packed, but when there is action it is kept at a realistic level. There are a couple of well done chase scenes, much of it on foot and some of it through the Pentagon.

Quaint by today's standards, but modern for the time, technology is used to track down the killer. Using computers the size of a refrigerator, but less powerful than the today's cigarette pack sized smart phones, records are traced and images manipulated. The computer technicians throw around words like "interface" and mispronounce "pixel" as "pixal". It's easily the most dated portion of the film.

I remember seeing and enjoying this movie when it came out 25 years ago and I don't think I've seen it since. It holds up very well. It's easy to see why it helped make Costner a star. 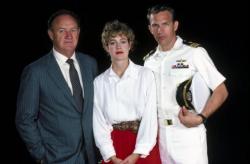 Gene Hackman, Sean Young and Kevin Costner in a publicity still for No Way Out.

This was a juicy part for Costner. In the first 20 minutes he gets to make love to Sean Young in the backseat of a limo and perform a daring rescue at sea. He handles both scenes with equal aplomb. Young is also quite good, even though – like Bette Davis in Fog Over Frisco – she perishes in the first half of the movie. Gene Hackman has a great scene where he “cries” over Young's death.

That said, I wasn't quite as enamored with No Way Out as Scott was. I agree that for the most part it maintains a level of realism. Also there is real tension and the story unfolds in an intriguing manner. There is a bit of subtle foreshadowing if you pay attention to the drink Costner orders in the scene where he first meets Young. Overall the script is decent but there is one scene that stands out as unbelievable.

It's the scene where Costner is at the Pentagon and they come looking for him. First he spills coffee on a desk and purposely sits on it to have an excuse to leave the room and hide. He sits on the spill but when he stands up there is a large coffee stain dripping down the front of his pants. Second we are supposed to believe that a relatively small group of men can search the entire Pentagon in two hours. This building has more than 17 miles of hallways. Third, when the searchers begin to clumsily unlock the door to the bathroom where Costner is hiding, he climbs into an air shaft that is clearly visible overhead. They merely glance into the room but don't bother to check out this obvious hiding place.

This movie is a great time capsule. It is set at the height of the Cold War and combines a 1940s gritty film noir style with the colorful, big-haired, lots of gratuitous nudity of the 80s. As Scott wrote, what was then cutting edge technology is now laughably primitive. It brings home the point of just how long ago the 1980s was.

The plot's twists and turns are fun to watch. The final reveal caught me completely by surprise. It remains satisfying although it changes everything that came before. The first half of the movie is all about the heat generated between Costner and Young. They really steam up the screen. The second half is a tense political mystery/thriller. No Way Out is a solidly entertaining film but for me it falls just short of being a 4-star classic. 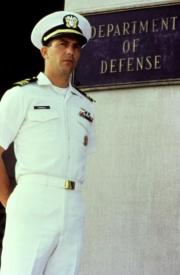 Kevin Costner in No Way Out

No Way Out is a great thriller that races by one interesting scene after another. Everything steadily builds with clues being handed out readily but not obviously. You just have to question everything. It all leads, one tense step at a time, to a not completely satisfying ending.

After starting an affair with Susan, Tom gets her to confess one night that the other man in her life is David Brice. Tom then tells Susan, "You know I work for Brice?" who responds, "I guess that makes two of us." Brice then decides to visit Susan while Tom is there. She begs Tom to leave through the back door, who comes back with, "When I go, it'll be through the front door." He ends up leaving through the back door but it makes no difference and sets into motion a whole heap of trouble.

The entire plot hinges on one coincidence after another. I enjoyed this film while watching it, but thinking about it later, the story starts to come apart. As Patrick wrote, the final twist changes all that came before. Even after the final reveal, I was left with more questions than answers. The pacing is quick and entertaining, but the final resolution is not as satisfying as the set up.