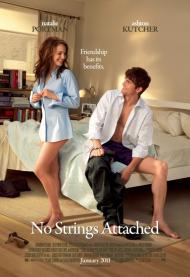 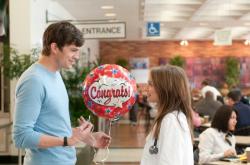 No Strings Attached is a film better suited to wiping your ass with than actually watching.  If we had not paid to see it, my wife and I would have walked out long before it came to it's pointless, predicatable ending.

Emma and Adam first meet when they are 14 years old at camp, where Adam tells Emma his parents are getting divorced and then asks if he can finger her.  This starts a film where absolutely everyone is rude and disrespectful to each other.  At her father's funeral, Emma introduces Adam to her grieving mother as the guy she had an affair with when she was 14.   When Adam pays a visit to his father, they smoke dope together and Adam learns that his dad is banging Adam's old girlfriend.

Emma comes up with a plan to just be fuck buddies.  Even though they clearly have feelings for each other she refuses to call it anything but sex.  We waited for the scene where she finally gives him the reason for keeping him at a distance, but all she ever says it that she does not know.  Did someone spend any amount of time writing this?

Everyone in this movie is pathetically selfish.  Emma uses Adam for sex even though it is obvious that he has deeper feelings.  Adam's dad does not care how his relationship with his new girlfriend will affect his son.  When he ends up in the hospital, his girlfriend bails on him.   When Adam passes out on Emma's couch naked, neither she nor any of her three room mates think to throw a blanket over him.

Not only did I not like any of the leads in this film, but I actively hated them.  The movie almost had a moment when Adam's best friend Eli takes Emma's best friend, Patrice, on a date.  She is so surprised when he opens the car door for her that she asks him to do it again.  The film could have expanded their relationship of respect and etiquete, and use it as a comparison to Adam and Emma merely rutting like pigs.   Eli has the best line, "Ten years from now you're gonna be having sex with your wife. And it's gonna be in the missionary position. And one if you is going to be asleep."

Portman, who is the hottest flat chested actress since Kathleen Turner, is a producer on this mess.  This is clearly a chick flick as Emma is always in charge of the relationship.  Every man on screen is a one dimensional prick.  In the most ridiculous scene, a fellow doctor, who likes Emma, tells Adam that it is okay that he is having sex with Emma because he knows she will end up marrying him and not Adam.  Yep, that is just how men work.  We do not mind knowing our future wives are getting the shit banged out of them as long as they eventually get bored with it and decide to marry us.

Another scene about menstrual cycles drags on far to long.  "It's like a crime scene in my pants."  Patrice announces for all to hear.   Women do not like having their periods and men do not like hearing about them.

The screenplay was written by Elizabeth Merriwhether.  On her IMDB page she is quoted as saying, "People want to put women in one box, and I'm interested in how women can be everything at once. She can be a slut who wants to fall in love, or she can party too much, but she'll still be very smart. I want to expand the vocabulary. We'll see how long I last."   Basing my opinion on No Strings Attached she should not last long.  Elizabeth Merriwether is a moron.  A woman who wants to fall in love should not slut around as it presents herself to men as nothing but a cum hole.   If a woman is very smart she will not party too much.  Merriwether's view of showing that women can be everything, actually shows them as idiots. 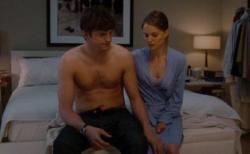 Ashton Kutcher and Natalie Portman in No Strings Attached.

Eric, I agree that this movie isn't very good, but I don't understand the anger that permeates your review. Do you know how much like a grumpy old man you sound? I can just picture you in a rocking chair on your porch complaining about the younger generation. "These kids today are rude and disrespectful and all they want to do is have sex!  Even the girls!" I can hear you say as you shake your cane at the neighbor kids running across your lawn.

I do agree with you on one very strong point though. The reason for Emma's (Portman) emotional coldness is never fully explored. One scene hints that growing up she had to be strong for her mother after her father left, but it's glossed over quickly. It's a topic that should have been explored more. You can see why a young doctor working crazy hours would have a hard time also sustaining a fulltime relationship, but we aren't told why she would actually object to trying. I beat on this point because it's so central to the love story. Without a good reason for Emma holding back, none of the obstacles to their relationship make much sense.

Although you're right Eric, that Adam's dad is selfish, I also thought, as played by Kevin Kline, he provides some laughs. He steals every scene that he's in and shows more charisma, even if it is drug induced, than his bland son, played by the much better looking, but fairly dull (here at least) Ashton Kutcher.

One thing I found rather odd about the film is the fact that it's R-Rated. You don't see a lot of R-Rated romantic comedies. The really odd thing is that the main reason for it being rated that way is because of the language, which features a lot of profanity. Don't get me wrong, I'm not complaining about the language, just surprised to hear it in this type of movie where normally the filmmakers want to appeal to as wide an audience as possible. These days it seems that filmmakers only make Rated-R movies when they want to use the R as a marketing gimmick and really push the envelope, but No Strings Attached is the softest R possible. It seems an odd decision.

Sure, this isn't a very good romantic comedy, or movie in general, really. Yes, it does have a predictable ending, but then what romantic comedy doesn't? I did laugh occasionally though and I certainly didn't hate the leads. It's just that a better script with clearer motivations and more character development would have gone a long way toward improving it.

Kevin Kline in No Strings Attached.

Wow Eric, this movie really got you worked up, but then if I had paid good money to see it in a theater I would probably be pretty pissed off too. Rarely has Three Movie Buffs' motto been more apt. No Strings Attached is a horrible movie, with unlikable characters and a shitty script. This is supposed to be a romantic comedy with an edgy sense of humor. That might have worked if they had limited the Judd Apatow type dialogue to a few of the supporting players instead of having everyone in the movie talk like a drunken frat boy.

I agree that Portman's Emma is poorly written. On the one hand the script wants her to be the ultimate modern, independent woman, as comfortable with casual sex as any man. A woman that puts on 3D glasses to stare at her fuck buddy's penis for amusement. I had no problem with that. Unlike Eric, I don't think all men view a promiscuous woman as “nothing but a cum hole.” Some modern men are secure enough to not be threatened by a woman with a strong sex drive and don't need a prospective wife to be a blushing virgin. You both mentioned the area where the script falters in regards to Emma. Her reasons for not giving a more serious relationship with Adam a chance are pretty insubstantial. A commitment phobia stemming from some vague, overwhelming need to be strong as a girl just doesn't cut it.

Some of the jokes worked for me. I laughed during the following conversation Adam has with his two best friends after they discover Adam's father is screwing Adam's ex. Eli: “You know what the best part about my gay dads is?” Adam: “What?” Eli: “They're never gonna eat out my ex-girlfriends.” Wallace: “You and your dad are tunnel buddies, huh?” Unfortunately this is about as funny as the movie ever gets.

Speaking of Adam's dad, how well preserved is Kevin Kline? He's in amazing shape for a guy on the far side of 60 (see photo). Even playing the single most shallow character in a movie filled with one-dimensional caricatures the talented Kline steals a few scenes. He is such an immature, thoughtless dad that the big bonding scene between father and son at the hospital never rings true though.

Dr. Metzner sounded incredibly familiar to me but I couldn't for the life of me place the face. I didn't recognize Cary Elwes under the beard and glasses. Despite the considerable charms of Ashton Kutcher and the talents of Natalie Portman, No Strings Attached is one of the worst romantic comedies I've sat through in recent years.