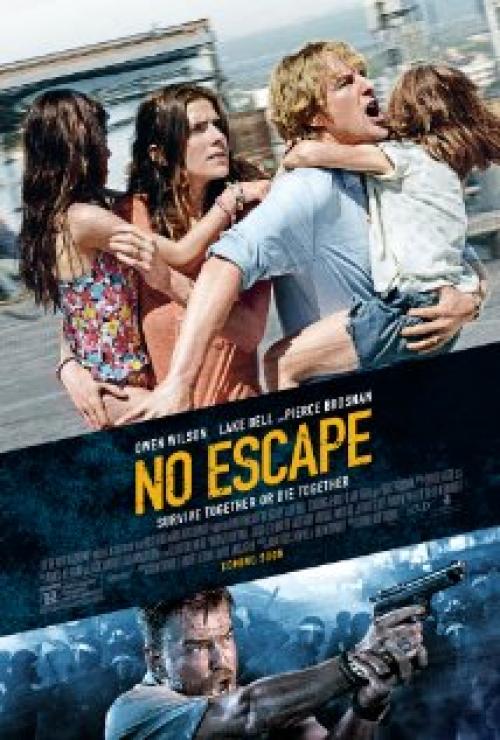 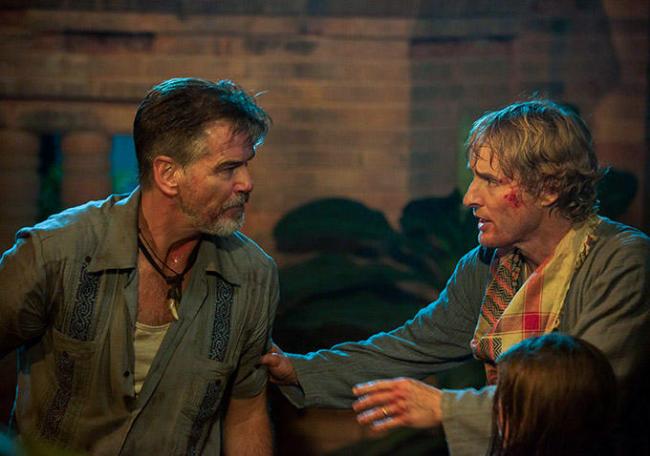 Pierce Brosnan and Owen Wilson in No Escape.

Many of the reviews I've read for No Escape have highlighted the xenophobic, limited worldview it represents. I do see their point in that this movie panders to the fears of those who believe that anywhere outside the Western World lies chaos and any tourist who ventures there is likely to be attacked. Where I disagree with those critics is how much that narrow-minded attitude affects the entertainment value. Sure, it's not exactly politically correct, but not every movie needs to be. Worse than the xenophobia is the scene inserted in the third act that tries to lay the blame for the rebellion on the Western World. This scene seems to be solely included in an attempt to deflect some of the aforementioned criticism, but clearly it has failed to do so. Besides, given this film's other problems, complaints about its lack of political correctness seem a waste of time.

Owen Wilson and Lake Bell star as Jack and Annie, married parents who are moving their two young daughters to a country in Southeast Asia. Jack's business has recently gone bust and so he's uprooted his family and taken a job with a water company in this exotic locale. As bad luck would have it, on the very night he arrives the Prime Minister is assassinated and the subsequent rebellion looks to murder all foreigners in the country. Jack and Annie, with their daughters in tow, must escape the rampaging hordes and try to find some way to stay alive. They are assisted in this by an under-used Pierce Brosnan, who plays Hammond, a colorful British man who might be more than he seems.

During the action scenes, the movie works. The tension is high as Jack and Annie must escape from their hotel and make their way across the city. Their predicament is made more dangerous by the fact that they must also shepherd their two young daughters along with them. Their girls are too young to fully understand what is going on, thus complicating matter even further. Jack's blonde hair and his family's pale skin means that blending in becomes nearly impossible while knowing who in the city might help and who is out for blood is likewise difficult. Any passing face might betray them. It helps that the movie keeps the action well within the realms of possibility. Jack never turns into a one-man killing machine. He remains a scared father doing what he can to save his family.

The movie falls apart in the quieter moments. Whenever the family finds a moment to catch its breath, the dialogue becomes overly schmaltzy and silly. The daughter's constant request to hear the story of how one of them was born is supposed to be touching, but is instead merely groan inducing. Director John Erick Dowdle does double-duty as screenwriter with his brother Drew, but he fares better as a director than a writer.

Wilson seems an odd choice for an action film. Perhaps he's looking to play more serious roles, but he's so often played his laid back comedy character, that it's difficult to accept him as the concerned father. Lake Bell does better as the mother, hinting at darker depths in their marriage life than is provided by the screenplay. Brosnan is still cashing in on his James Bond past, playing the aging world traveler gone slightly to seed. He lights up the screen during his too brief appearances.

This is clearly a B-movie that wants to be something in the Taken vein. As cheesy as those Liam Neeson film's might be however, at least the dialogue managed to be less embarrassing than that provided here. There are some cheap thrills to be found, but not enough to justify the price of a movie ticket. 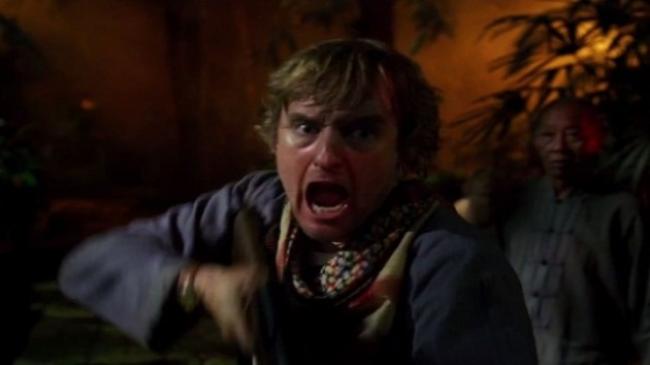 Owen Wilson in No Escape

At no point in No Escape does it pander to the fears of those who believe that anywhere outside the Western World lies chaos and any tourist who ventures there is likely to be attacked. This is the story of Jack and Annie and their unique struggle to keep themselves and their children alive during a rebellion in an Asian country. It never suggests or even implies that westerners fear such things when traveling abroad, even though similar events have happened in real life.

I agree completely with Scott that the film missteps when it out right blames (not tries to) western corporations for the rebellion. The worst moment is when Pierce Brosnan defends the murdering mob by saying that they are just fathers defending their children like Jack is. Really? So there are legitimate reasons to kill innocent people who have no direct connection to the decisions made by their government? With that logic we could defend Nazis in 1930s Germany. Their economy was in the tank. Their money was worthless. Those German men had to kill Jews and start a war to create jobs to earn money so as to feed their children.

As a family action/drama, No Escape has some tense moments. I agree with Scott when he wrote that taking care of children in this dangerous environment adds another level of stress. I felt the parents frustrations as they had to make difficult decisions that their daughters did not understand. The most obvious being when Jack has to throw them off of the roof.

The scene at the American Embassy, where we are shown the dead United States Marines was sad as not only was it some dead American soldiers but possibly Jack and Annie's last hope for safety. According to Hillary Clinton it should not have concerned me as she explained in her loud screechy voice during a Senate hearing, "What difference does it make?" in reference to U.S. soldiers who were killed defending the American embassy in Benghazi. Hey, if other critics can see their politics in this film, I guess I can as well. Another thing that bothered me about that scene was that the United States flag was still proudly flying. It would have more than likely been taken down immediately by the mob and treated as a trophy or burned in a public forum, but what difference would that make?

Not only is there no escaping the blame America message but this movie has a laughable ending. Spoiler alert: They end up getting into a row boat and travel about what looks like 100 hundred yards down stream to a neighboring country. Seriously, they could have walked that in less time than it took them to roast that dog on the roof. No Escape was a decent enough idea but not a very well executed one.