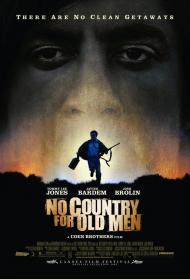 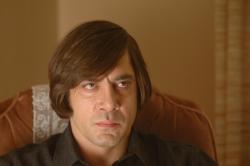 Javier Bardem in No Country for Old Men.

No Country for Old Men is almost the best movie of the year. If it wasn't for the fact that it doesn't have an ending it probably would be. I don't mean the movie never stops. I'm not writing this in the theater as the movie plays endlessly on. It's just that the movie stops abruptly, leaving the fate of at least two characters up in the air and the culmination of one character's storyline, which is the main storyline, takes place off-screen. Now I know these are the Coen Brothers we're talking about and their movie making muse certainly dances to the beat of a different drummer and all, but this ending is such a massive disappointment. It's not only going to cost them awards and money at the box office, it's actually a betrayal of all that comes before it.

Oh, I know the Coen brother's fanatics will come crawling out of the woodwork defending this artistic choice of endings, but it's pure bullshit. I'm not talking about artistic choices, yes the movie deals with the deeper themes of fate and chance, but it's also a violent, action thriller that's building to a bloody showdown that never comes. It draws you completely into this world and its characters and then abandons you at the end. If there's one thing I hate it's ambiguous endings to movies, but at least in some movies you can kind of see them coming. The "ending" to this movie completely blind-sided me.

Although Tommy Lee Jones is top billed, this is Josh Brolin and Javier Bardem's movie. Brolin plays Llewelyn Moss, a Vietnam Vet in 1980 Texas. While hunting in the desert, he comes across the remains of a drug deal gone bad. Amongst the corpses he finds a case full of money, which he decides to keep instead of turn in to the authorities. The company behind the deal hire Chigurh (Bardem), a psychopathic and very deadly killer to get the money back. Most of the movie is a sinister cat-and-mouse thriller as Chigurh track Moss down, from one seedy motel to the next across Texas and into Mexico.

Along with the action, the movie is filled with colorful and eccentric characters of the type you expect to find in a Coen Brother's film, but this time they show restraint and never go over the top. There are flashes of their comedy, but always just enough, it never interferes with the action or the tension.

The look of the film is incredibly cinematic. This is not a movie to see on your television, no matter how big. It screams to be seen on the big-screen. The sweeping vistas of the Texan landscape are shown like a modern-day Western. Often long scenes play out with very little dialogue. Although it's based on a book, this is movie making done right. Things are shown, not explained. Right up until the ending that is, when things are left decidedly unshown.

Both Brolin and Bardem are terrific in their roles. Bardem is terrifyingly crazy. When asked how dangerous he is, one character responds, "Compared to what? The bubonic plague?". Brolin is the real revelation here though. Up until now the only things I knew him for was being the son-in-law to Babs and the ex-fiancee to Minnie Driver. Who knew he could actually act? He has very little dialogue, but doesn't seem to need it. He makes do with his physical acting, expressing in his face what he's feeling on the inside.

Without that "ending" this would definitely have been my pick for best movie of the year. Instead it's a flawed masterpiece, which I guess is closer to a masterpiece than 99.9% of movies made today ever get, but why the fuck couldn't they have given a real ending to this movie? I don't care if it's how the book ended. Given a real ending and I have no doubts you would have been hearing No Country for Old Men and "the Oscar goes to...", in the same breath an awful lot, come Academy Awards Night. 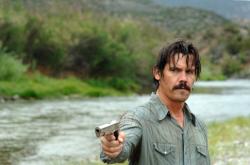 Josh Brolin in No Country for Old Men.

I have to agree that I didn't really enjoy the ending. It's fine if they were being faithful to the novel but what works on the page doesn't always work on the screen. Some of the greatest novels-to-movies have made major plot changes to accommodate the different medium.

I suppose it's meant to be ironic that No Country for Old Men ends with some elegiac dialogue between two old-timers, while many younger men died violently over the course of the movie.

The cinematography and acting are superb. In fact, I think everyone will agree that the first ninety minutes of this movie are brilliant. But the agreement will stop there. Others will either love or hate the ending. And maybe that was the point. But what could have been a classic Movie is instead an artistic Film. And Movies have a much longer shelf life. 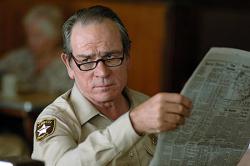 Tommy Lee Jones in No Country for Old Men.

What a piece of shit! It looks as if Josh Brolin did not come to work one day and the Coen brothers decided to just complete the film without him. The only other reason I can come up why they made the film this way is that at the end of the movie Jones has some dialogue where he talks about a dream he had. Perhaps the Coen brothers were hinting that this was all in Jones's head or memory. This would explain Woody Harrelson's character. He shows up at Brolin's bedside in Mexico without an explanation as to how he found him. He finds the case of money pretty easily as well. Maybe the Coen brothers were trying to be creative, but I think my first sentence says it all.