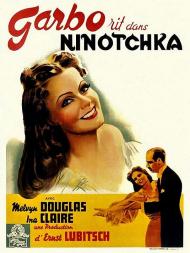 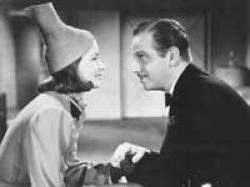 Ninotchka was one of ten movies nominated for Best Picture by the Motion Picture Academy in the glorious year of 1939. Its competition consisted of Dark Victory, Goodbye, Mr. Chips, Love Affair, Mr. Smith goes to Washington, Of Mice and Men, Wuthering Heights, Stagecoach and two other pictures you may have heard of called The Wizard of Oz and Gone with the Wind. No other year can boast as many classic movies.

Ninotchka was promoted with the tagline “Garbo laughs” which was itself copying the promotion from the beginning of the decade when “Garbo Talks!” blazed across newspaper headlines upon the release of Anna Christie, the enigmatic superstar’s first talking picture. With Ninotchka Garbo proved that she could play more than just tragic and tortured heroines. Here she displays a gift for comedic timing while maintaining her ineffable allure.

With a screenplay written by Billy Wilder, Charles Brackett and Walter Reisch and direction by the brilliant Ernst Lubitsch, Ninotchka is a witty, intelligent comedy that holds up as well today as it did in 1939. We first see Garbo standing alone at a train station in Paris, holding her luggage. It is shot similarly to her entrance in the bar in Anna Christie.

She plays a Russian envoy sent to check up on three previous envoys on a mission to sell State jewels to raise money to feed the Russian populace. An exiled Russian Grand Duchess (Ina Claire) claims the jewels rightfully belong to her and the matter will be settled in the French courts. Meanwhile a playboy (Melvyn Douglas) who has been keeping company with the Grand Duchess has a chance meeting with Ninotchka and they, of course, fall in love. Complications ensue.

Most of the jokes spring from Ninotchka’s commentary on capitalism. When a porter comes to take her bags at the train station she has this exchange with him: “Why should you carry other people’s bags?” “Well, that’s my business, madam.” “That’s no business. That’s social injustice.” “That depends on the tip.”

When a fashionable, but rather silly looking, hat (see photo above) catches her eye in a window display she asks rhetorically, “How can such a civilization survive which permits their women to put things like that on their heads?” She then knowingly predicts, “It won’t be long now, comrades.”

The movies’ most famous scene takes place in a restaurant. Douglas’ Leon is trying to get the stoic Ninotchka to laugh by telling her jokes; all of which fall flat or go over her head. When he unexpectedly leans too far back in his chair and falls over onto the floor, Ninotchka finally bursts out laughing and you just know she will never be the same woman again. A few scenes later when she buys and puts on the silly yet fashionable hat, the transformation is complete.

Just when things are looking rosy for Ninotchka and Leon, she is forced by circumstances to return to Moscow. It seems her newfound freedoms and attitude adjustments were for naught. Or were they? Watch this wonderful movie to find out and see if you can recognize Count Dracula himself Bela Lugosi in a supporting role. 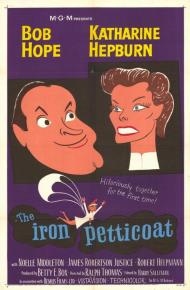