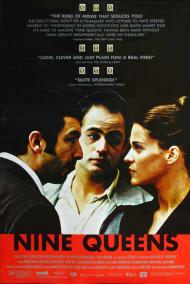 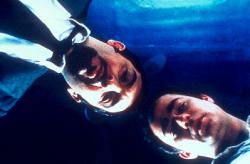 Nine Queens is a heist caper from Argentina in the same style as The Score. It's about a couple of small time grifters who hatch a scheme to sell a counterfeit set of rare stamps known as the Nine Queens. The fun of the movie is watching them scramble to adjust as their well-laid plans begin to go awry. All roads lead to a twist ending as you might expect.

The two leads are good. Ricardo Darín as Marcos, the older, more experienced thief, is the central character. He exudes a gritty realism that suits the movies' atmosphere. Gastón Pauls is the younger - less assertive - thief with a conscious. He gives the more understated performance. The supporting cast of interesting characters they meet along the way are all done nicely as well, particularly Leticia Brédice as Valeria, Marcos' uptight sister.

In fact the entire package works. I recommend this Nine Queens even for those who don't normally watch subtitled movies. Most of the dialogue comes in short bursts and is witty and descriptive. It also provides a somewhat romanticized look at the criminal underside of Buenos Aires.

Although at times clichéd, for the most part, writer/director Fabián Bielinsky delivers royally with Nine Queens.