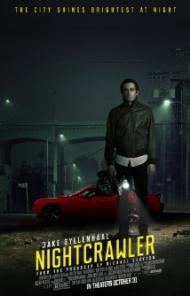 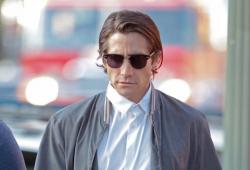 Nightcrawler is a thriller with a social satire coating. It features a terrific central performance by Jake Gyllenhaal that is sure to garner awards attention. It's a slickly packaged, dark and glossy look at news gathering on the night time streets of Los Angeles. Like the news stories it covers, it's difficult to look away, but I wouldn't call it high entertainment.

Gyllenhaal stars as Louis Bloom, a creepy sociopath living on the fringe of society. When he witnesses a car accident one night and the freelance camera crew that shows up to film it, he decides he's found his calling. With money he earns from stolen goods, he buys a police scanner and a cheap camcorder and begins prowling the streets of L.A. at night trying to capture footage of crime scenes that he can sell to a television station. He soon learns that he has a knack for the job and begins selling his videos exclusively to one station where he meets producer Nina (Russo), a woman with an insatiable appetite for news; the darker and twisted the better. When the news isn't dark enough or coming in fast enough, Louis begins to see how he can create and manipulate some of his own.

Much has been made of Gyllenhaal's weight loss for this role and while reportedly it was only about 20 pounds, it's still effective. The actor has stated in interviews that he was inspired by the coyotes that scavenge in the suburbs and hills around Los Angeles and based Louis's looks and behaviors on those nocturnal carnivores. It's a slimy performance and the character has been compared to De Niro's Travis Bickle. Louis likes to spout business and self-help platitudes and often speaks above himself. When he hires a homeless man as his assistant, Louis interviews him and gives him orders as if he were in charge of a large company. His connection with reality often seems tenuous, but like many sociopaths, what he lacks in empathy, he makes up for with a dark intelligence.

The other 1970s' film Nightcrawler has been compared to is Network. Although it never comes close to matching that classic film it does share several themes in common with it. Both films show how news broadcasts are more interested in chasing ratings and in spinning news stories to generate the most scandal and fear that they can to boost those ratings. As Nina teaches Louis, the best news stories are those that involve urban crime in a suburban setting, preferably where the victim is white middle class and the criminal a minority.

In some ways, by placing this emphasis on television news the film feels a little old-fashioned. No mention is made of the fact that in today's internet age almost everyone in the world has a camera in their pocket and the ability through YouTube to show their videos to a global audience that far outstrips any mere local news station. Surely it's those members of the general public who post such videos online that are the greatest threat to the Nightcrawlers' livelihoods.

Although not every movie needs to feature a likable protagonist, it helps when you can empathize or occasionally root for them. With Louis Bloom it's difficult to do either. He is dislikable from beginning to end. In fact there's a dearth of likable characters in the entire film. Only Rick (Riz Ahmed), Louis's hapless assistant, comes across as sympathetic, at least in the way he is treated by Louis. We never learn much about him apart from his interactions with his boss. It's a great acting exercise for Gyllenhaal but this isn't the sort of movie you're likely to watch more than once.

Writer Dan Gilroy makes his directorial debut and he does a decent job of it. The pacing is good and there are moments of real tension. He makes good use of the sprawling Los Angeles streets at night. It's stylishly lit and slickly filmed. He also contributes, via his script, some moments of dark and caustic humor, which he manages to weave into the story without taking away any of the tension.

This is a dark and cynical film that will hold your attention throughout. In the end though it will be remembered most for Gyllenhaal's twisted performance. 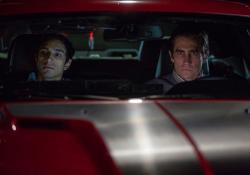 I agree, Nightcrawler is a stylishly filmed, well-acted, thriller with a social message. It's cynical and darkly humorous at times but also truthful, I think, about the deplorable side of human nature. The script could definitely be described as Taxi Driver meets Network. It features some decent dialogue and there are several tensely violent moments but I enjoyed it most as a character study. There are three important characters in the movie.

Louis Bloom is a slimy, ruthless sociopath and as such he makes for quite a memorable movie villain. Jake Gyllenhaal disappears inside the role. He looks like the office weirdo with those hollow cheeks, bulging eyes, and that ridiculous top knot in his hair; moving about like a speed freak, the gears in his brain visibly cranking. He talks in disconnected generalities like a self-help manual. There's an empty space where his soul should be but he possesses an admirable work ethic. We first meet Louis on the brink of his career as a nightcrawler and we never learn much about his past. Exactly how he became this twisted individual is left to the audience to decide.

The second most important character is Nina Romina, the television producer played by Rene Russo (in real life she's married to the movie's director/writer). Romina's as ambitious as Bloom, if slightly less sleazy. She's desperate to climb out of the rating's cellar and willingly encourages his questionable behavior. Nina and Louis race each other to the gutter. Russo is good but Nina is a weaker character than Louis. At the beginning of their relationship she's the teacher and the one with all the power. But that quickly changes and she gives him control far too easily.

Riz Ahmed plays Rick, the slightly dimwitted, homeless guy Louis hires as his assistant nightcrawler. The scene where he interviews Rick is oddly amusing. As Scott wrote, Louis conducts himself and speaks as if he's the CEO of a Fortune 500 company, instead of an oddball thief who stumbled upon a moneymaking idea. Rick is at first happy just to be employed but he soon realizes that his boss is a bit unusual. Eventually he discovers exactly how far Louis is willing to go. Ahmed plays Rick as a wide-eyed innocent, until he becomes tainted by his bosses corruption. He provides someone for Louis to bounce off of. It is during their conversations, as they prowl the nocturnal L.A. streets (see photo), that Louis's true mental state is most clearly revealed.

As my brother wrote, Nightcrawler's narrow focus on television news lends the story an old fashioned quality. The fact that many people today get their news from the internet (uncensored) is never really mentioned. This also makes the story more timeless. With very little change it could take place in almost any decade since the 1970s. I don't think Nightcrawler will ever rank alongside Taxi Driver or Network as a classic but it is worth seeing for Gyllenhaal's chillingly unfeeling performance alone. Dan Gilroy certainly seems to have a bright future as a filmmaker. 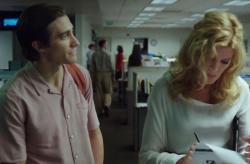 Yeah, the days of Network news dominating the countries source of information is long gone. There are people though, who still watch it. It plays in the background during house work or dinner. It is still a part of many households but its viewership is predominantly middle aged and older. It is because of the internet and all of the other sources of news media that created people like Rene Russo’s Nina Romina, who must sensationalize the news to pull in and hold viewers.

My favorite part of the film, and the most telling, is when she plays a video that Louis Bloom has provided for her of a triple homicide. As the worthless newscasters are on live television, she directs them to use words like “vicious.” She repeats over and over to the mindless newscasters to remind the audience that the killers are on the loose. She wants the viewers to be scared and wonder what else may be coming. They build an ongoing story about the murders, naming it “Horror House.”

The most horrendous part of these scenes is that no one on screen is shown being at all sympathetic with the three victims. So caught up in filming and reporting the murders, they forget, or do not care, that actual human beings have just lost their lives. Bloom, so caught up in filming, never even checks if any of the victims may still be alive and in desperate need of medical assistance. It is reminiscent of the paparazzi that photo’d Princess Diana as she lay dying in a car after the fatal crash.

Another telling scene is when Detective Fronteiri tells Bloom, “You filmed him dying.” And the calculated Bloom responds, “That's my job, that's what I do, I'd like to think if you're seeing me you're having the worst day of your life.” Bloom is without a heart or soul.

I agree completely with my brothers that Jake Gyllenhaal is good as the self-absorbed Louis Bloom. He has some interesting lines. When Russo says, “Friends don't pressure friends to sleep with them.” Gyllenhaal corrects her, “Actually that's not true because as you know Nina, a friend is a gift you give yourself.” He repeats this line a couple of times throughout the film, “My motto is if you want to win the lottery you've got to make money to get a ticket.” Yeah, he is not as deep or literarily clever as he thinks.

Nightcrawler shows how news outlets run with some stories, milking everything they can from them. As Scott noted, Nina tells Louis that the reporting of some crimes are more important than others. The importance is not just location and skin color but whether or not the media has a potential killer to continuously talk about. Look at any murder case that the news media has latched onto. How long did we hear about Laci Peterson’s murder? Because the media was sure her husband, Scott, did it the story stayed alive until his conviction. How about JonBenet Ramsey's death? Her parents have always been suspect so the media had plenty to talk about for years. Everyone believed Joran Van der Sloot was not telling the whole truth about a missing girl so he remained in the news until he finally went to prison, a couple of years later, for another crime. Of course, let us not forget O. J. Simpson’s closely covered murderous rampage.

Although not the most entertaining film, Nightcrawler is a sadly accurate reflection of news organizations desperate need to sensationalize and even lie for ratings and attention. Yeah, I am talking to you Brian Williams. 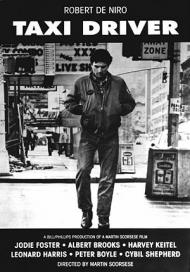 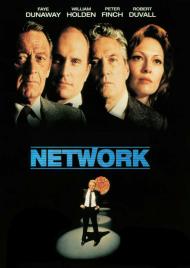