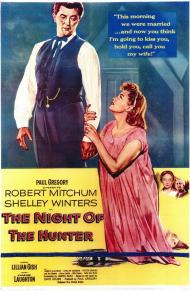 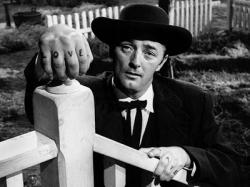 Robert Mitchum in The Night of the Hunter.

The Night of the Hunter is the only movie that the mellifluous voiced actor Charles Laughton ever directed. That's too bad because this one is a masterpiece of filmmaking. It stars Robert Mitchum, Lillian Gish and Shelley Winters and tells a frightening yet ultimately uplifting story about the fragility of childhood in this often-cruel world.

SPOILER ALERT: This review gives away several key plot points so if you've never seen The Night of the Hunter you may wish to stop reading now.

Mitchum as fake preacher Harry Powell learns of some stolen cash while in jail and later marries the thief's short-on-self-esteem widow and terrorizes her two small children in order to discover its location. He eventually murders his wife and chases the two children across the countryside in the movie's thrilling climax only to be thwarted by goodness personified in the form of Lillian Gish as a woman who shelters runaways and orphans.

Many different ingredients contribute to making The Night of the Hunter so good. Besides the absolutely brilliant acting there is the amazing black and white cinematography, the creepy use of shadows and sounds and fanciful imagery, and several terrifying close-calls of the fleeing children.

Poor Shelley Winters. Once again she ends up in a watery grave as she did a few years earlier in A Place in the Sun and would later in The Poseidon Adventure. There is a chilling shot of her corpse sitting in a car at the bottom of a lake, her blond hair flowing about with the current, clearly visible through the glass-like water. It is an image that resonates long after the final credits.

The performances of the two young Harper children (Billy Chapin and Sally Jane Bruce) are astonishingly real. You will share every bit of their terror. But it is the performances of Robert Mitchum and Lillian Gish that make the movie the classic that it is. His completely vile Rev. Powell with LOVE tattooed on the fingers of his right hand and HATE tattooed on the fingers of his left, calling out in a blood-curdling voice, 'Chiiilll...dren!' is balanced by the equally good, upstanding and morally brave Rachel Cooper. She alone stands between the children and an unimaginable fate. As she so aptly puts it, 'I'm a strong tree with branches for many birds. I'm good for something in this world and I know it too.'

Rarely has the theme of good versus evil been so simply yet so effectively wrought in any work of art. 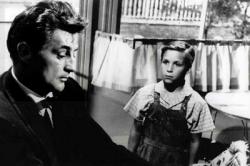 Robert Mitchum and Billy Chapin in The Night of the Hunter

The Night of the Hunter is indeed a tale of good versus evil. What I found interesting is that by some contemporary standards, Mrs. Cooper, played by Lillian Gish, may not be considered the epitome of goodness. Granted she takes in any child that finds their way to her doorstep, but she thinks nothing of spanking them with a switch or scrub brush. She bathes the boy in the presence of girls. Today’s foster care services have strict guidelines about opposite sex children sharing personal space. Of course the children are better off with her than with Harry, but her constant Christian preaching may put off some people today.

Harry is without question, a disciple of Satan. He commits murder but his greatest ability is his charm in the face of weaker people. He convinces Willa that her husband committed crimes because she tempted him with her sexual beguiles. Harry’s and Willa’s honeymoon scene is the least sexual ever put on film, with Harry easily convincing Willa that she is a sinner for wanting Harry to make love to her. Harry is motivated by greed and lots of inner demons while Willa is simply looking for someone to tell her what to do.

The film begins with Gish narrating to her fostered children. Part of it contains the line, "Beware of false prophets, which come to you in sheep’s clothing but inwardly are ravaging wolves." This is an obvious nod to Harry who is truly one of the greatest screen villains of all time. They rarely come as slimy as Harry Powell. He pretends to be the very height of morality with his preacher facade but is the complete opposite. I agree with Patrick that his call to Willa’s “Chiiilll...dren.” is very sarcastically threatening. He constantly calls the children, “lambs” while he acts like a circling wolf, waiting for the right moment to slaughter them. Only Mrs. Cooper, acting as guard dog, is capable of seeing through his disguise and recognizes the threat he poses.

Patrick mentioned the direction and with its constant use of shadows and light, it is an art house piece of work. It sometimes seems uneven with Laughton filming some outdoor scenes on a set and some on location. He often has his actors over act. Harry chases the children up the basement stairs with his arms straight out like Frankenstein’s monster. To me the film feels like an old Grimm’s fairy tale, with Harry in the role of a classic step parent villain.

This is however, a very adult tale. Ruby, a teenage girl living with Ms. Cooper, sells herself to any man who buys her ice cream and tells her she is pretty. Harry Powell is also a sexual mess. He visits burlesque shows where his hand with “HATE” tattooed on it gets a work out. He turns down several opportunities for sex.

Patrick credited the performances of Robert Mitchum and Lillian Gish as making this movie the classic that it is and he is correct. The scene where Gish shoots Mitchum best demonstrates this. He sounds inhuman as he screams like a wounded bird and runs away, while she is visibly bothered by having just shot someone.

I cannot end this review without writing about Billy Chapin and Sally Jane Bruce as John and Pearl. They, the Hansel and Gretel of the film, are burdened by their father making them swear to keep a secret. Just how deeply scarred they are becomes apparent later in the story. At one point Pearl calls Harry, “Daddy.” At a very dramatic moment John also sees Harry as his father and reacts in a surprising way.

The Night of the Hunter is a very unique film in that it seems quite dated yet its subject matter is timeless. It is a psychological thriller that comments on the fragile state of children's psyche. 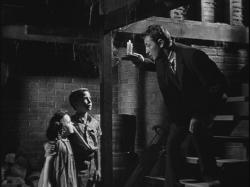 Sally Jane Bruce, Billy Chapin and Robert MItchum in The Night of the Hunter.

Eric struck the right note when he compared this movie to an old fairy tale. That's exactly what this movie is and even its director, Charles Laughton, agreed. "It's really a nightmarish sort of Mother Goose tale we were telling," Laughton said. "We tried to surround the children with creatures they might have observed, and that might have seemed part of a dream. It was, in a way, a dream for them."

Mitchum's Rev. Powell is very much a fairy tale monster. Eric mentioned how he chases the children like Frankenstein. It's very unrealistic as he moves very slowly and stiffly, but it gives that scene a very distinctive look that is reminiscent of a children's tale. However, certain aspects of his character are very grown-up. It doesn't take Freud to see what his switchblade represents. Note how it springs to life when Ruby propositions him, suddenly poking out, ripping a hole in his pocket, stiff and erect. And of course, the LOVE/HATE tattoos are now iconic and have been spoofed many times, from The Simpsons to Seinfeld and many different shows and movies in-between. Mitchum once called the role his personal favorite of all the characters he ever portrayed.

Laughton and cinematographer Stanley Cortez definitely create some very memorable imagery. Shelly Winters under the water is one that will stay with you, but there are others also.  One of my favorites is when young Billy Chapin is sitting in the barn and he sees Robert Mitchum's character in silhouette riding past on a horse while singing. Other scenes though, while stylish, are sometimes intrusive. The very first scene Rev. Powell appears in, he is shown driving a car and the camera cuts to different angles around him, serving no purpose other than to remind you that you're watching a movie. Even the scenes that don't quite work still manage to be interesting. Cortez once said, "Apart from The Magnificent Ambersons, the most exciting experience I have had in the cinema was with Charles Laughton on Night of the Hunter..every day I consider something new about light, that incredible thing that can't be described. Of the directors I've worked with, only two have understood it: Orson Welles and Charles Laughton."

Although it received generally favorable reviews, this film was a commercial failure. He reportedly took its lack of popularity quite personally and abandoned all plans to direct any future films.  It's a pity because his one and only film has grown in stature over the intervening years. With something this good as his first film, it would have been interesting to see what he could have done with a little more experience.