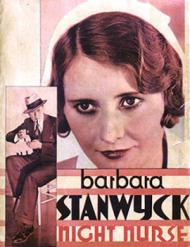 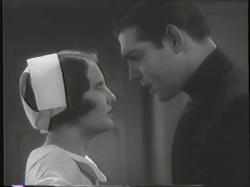 Barbara Stanwyck faces off against Clark Gable in Night Nurse.

Energetically directed by William A. Wellman, Night Nurse is a gritty Pre-Code melodrama that crams plenty of tension-filled plot, and risqué situations, into a swift 70 minutes. Brooklyn born Barbara Stanwyck (sporting her original crooked-toothed smile) is superb as the gutsy nocturnal nurse, Lora Hart. She survives nursing school before finding herself in a desperate struggle to save the lives of two little girls being systematically starved to death for their trust fund.

The first half of the story deals with Lora’s time in nursing school. She rooms with fellow nursing student, B. Maloney (Joan Blondell in her usual wise-cracking, gum-popping, best friend mode). They spend quite a bit of screen time in their lingerie. Blondell even helping Stanwyck remove her stockings at one point. When a randy intern walks in on them while Stanwyck is getting undressed, he quips, “Oh, don't be embarrassed. You can't show me a thing. I just came from the delivery room!”

One night a man walks in with a bullet wound in his shoulder. He turns out to be a bootlegger named Mortie, played by former silent juvenile lead Ben Lyon (husband of Bebe Daniels and later famous for discovering and naming Marilyn Monroe while working as a casting director at 20th Century-Fox). He acquits himself well as the good natured gangster, one of those types that existed only in 1930s Hollywood. Although Mortie’s involved in all kinds of illegal activity – up to and including having people bumped off – this Pre-Code movie allows him a clean getaway and happy ending with Stanwyck.

The second half of the story takes place at a private home where Lora is hired to care for two ailing children. The plot gets a bit convoluted at this point. Lora quickly discovers the girls are being starved. When she reports this to the kindly Dr. Bell (Charles Winninger), the same man that helped her get into nursing school at the beginning of the movie, he replies that since he isn’t their doctor, he can do nothing about their case, as it wouldn’t be ethical. An exasperated Stanwyck replies, “Oh, ethics... ethics... ethics! That's all I've heard. Isn't there any ethics about letting poor little babies be murdered?”

Sorry Lora, apparently not in 1931. Today Child Protective Services would be all over this unfit mother. She’s a drunk, callously throwing lavish parties while her daughters are being starved to death upstairs. When Stanwyck confronts her she slurs out, “I'm a dipsomaniac, and I'm proud of it, you mean.” Stanwyck proceeds to sock her male drinking companion in order to force the woman to care for her children. When the plastered floozy collapses on the floor as Lora attempts to drag her from the room, Stanwyck looks down at her with contempt and spits out, “YOU MOTHER!”

Clark Gable has a few key scenes as the sadistic chauffer, Nick. He took the role that was originally intended for James Cagney. After The Public Enemy became a surprise hit, Cagney was deemed too big a star for such a small role. Gable leaves an impression with his limited screen time. He makes his entrance in a flashy bathrobe, Stanwyck asks, “Who are you?” In a booming voice, dripping with testosterone, he replies, “I'm Nick... the chauffeur.” When Stanwyck refuses his orders he belts her a good one on the chin.

Night Nurse, while flawed, is a must see for fans of Pre-Code films. Barbara Stanwyck shines in the starring role as Lora Hart and a pre-stardom Clark Gable is despicable but riveting as the vile chauffer with nefarious plans. 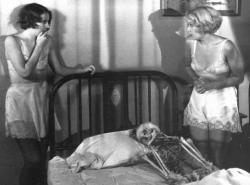 This movie is pure melodrama with some titillation thrown in just for the sake of it. It reminded me of the 1931 equivalent of the kind of movie you might see late on a Friday night on Showtime or Cinemax. Thanks to the talented cast and some humor thrown in though, it's much better and more entertaining than it has a right to be.

The titillation is rather amusing by today's standards. Stanwyck and Blondell strip down to their bra and half-slips several times and even snuggle up in bed together. As I say, it's all very innocent compared to any movie today, but they are both cute, particularly Blondell.

Gable makes a great villain. Dressed all in black in his chauffeurs' uniform, he comes across as actually quite menacing. I enjoyed Ben Lyon as Mortie the bootlegger, but Gable's Nick looks like he could eat him for breakfast and still have room for a couple of eggs.

As you mention Patrick, some of the attitudes of the era seem quite dated as well as the medical practices.  How is a bath in milk supposed to help anybody? And a blood transfusion for malnutrition? And somehow it's more unethical to treat another doctor's patient than it is to let a child die?

I've said it many times before, but it's worth repeating again that Pre-Code movies like this one are so refreshing compared to films made just a few years later. Beyond just the titillation factor, the ending would have been completely different after the Code went into effect.

This is a minor little film, but completely enjoyable nonetheless. 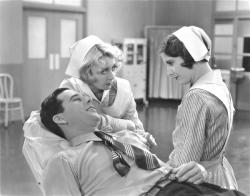 Scott mentioned the dated medical practices, and they are laughable.  How can a nurse not recognize that these girls are starving and simply feed them?  Patrick wrote that today Child Protective Services would be all over this case.  Another dated example is that Lora gets hit by Nick and never reports it to the police.  As a woman in 1931, was she expected to take that kind of abuse in stride?  Few modern woman would.

A constant theme is the contradiction of ethics.  Patrick mentioned one line, while another is when a frustrated Lora says, "I'll kill the next one that says ethics to me."  Mortie is a criminal but he also ends up being the hero and a very ethical person.  I agree with Scott though, Gable could wipe the floor with Ben Lyon.  It is no wonder he became such a huge movie star while Ben Lyon dissapeared.