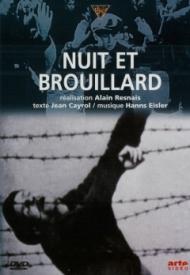 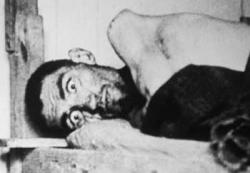 What was this man's last thought?

Night and Fog (Nuit et brouillard) is a French documentary short showing the horrors of the holocaust.  It was one of the first such films made to show the Nazi's atrocities, in unflinching detail.

Director Alain Resnais took his cameras to the abandoned concentration/death camps in the fall of 1955.  He filmed the buildings and grounds.  The movie is interspersed with archive black and white film of prisoners and Nazi's in the camps.  The contrast of the archive footage and the color film is startling.

The archive footage is often shocking.  This is not a film to be viewed by children.  It shows many naked piles of corpses, bodies being bulldozed, burnt remains, dead bodies being thrown into pits.  One of the most unnerving scenes is that of a guillotine, with a basket of fresh human heads next to it.  The camera lingers grotesquely on the heads.

This is not just a "see what happened" documentary.  It makes a legitimate point.  The narrator says that although this happened in the past it does not mean it is not happening today, or could happen again in the future, "Those of us who pretend to believe that all this happened at a certain time and in a certain place, and those who refuse to see, who do not hear the cry to the end of time."  The use of color versus black and white film illustrates the point perfectly.

After the film was complete and ready for release, it ran into a problem.  One of the archive film clips shows a French officer guarding Jews at a detention center before being deported.  Resnais was asked to edit the clip out as it would embarrass France by showing a Frenchman helping the Nazi's final solution.  He refused to cut the scene but ended up coloring over the Frenchman so he is not seen.

He was asked to compromise his film, whose message was to never forget what did, and what can, happen.  We cannot look at the past, or the world around us, with rose censored glasses.  If we are to see the world clearly we cannot edit what we know.  We must see it for all it's ugliness as well as it's beauty.